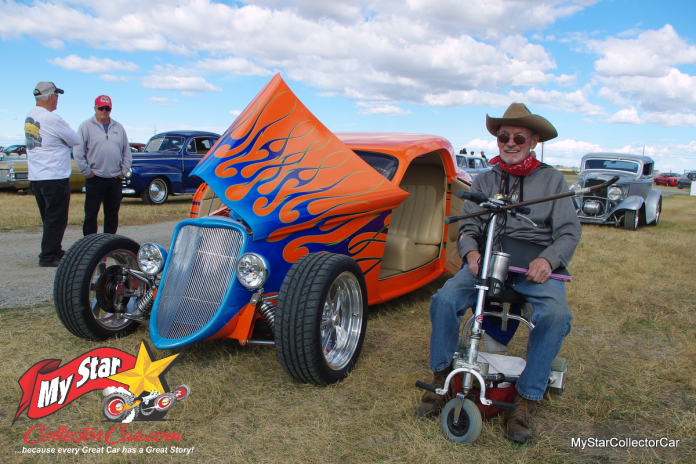 There are many players in a legendary street rod build because car guys at that level are specialists.

Stacy Campbell was happy to explain his dad’s connection to this award-winning street rod because they’ve worked together on other projects: “Charles Campbell was my dad, 3rd Coast Designs Keith Graves was the fab guy behind the built chassis and the body work. It was painted by Shane Barns and Pat Maxwell aka The Mad Pinstriper. Ron Mangus from California did all the interior, and the custom air cleaner cover was airbrushed by Total Kaos Rodney”.

“My dad and team built it and headed out to win ISCA Western Rod division, then he got Rookie of the Year that year he won! He had a liver transplant the year before it was built. He won in 2003.We sold the car to Scotty Grey then at some point it wound up at Barrett then disappeared, it seemed”.

The other name is a guy named Chris Holmes–he’s the current owner of the Out of Control ’33 Ford. The car was in a museum owned by a billionaire, but the car came up for sale at his estate. Chris said, “The family didn’t like hot rods” and it ended up in a 2011 Barrett Jackson auction.

The car eventually made its way to Alberta, Canada and that’s where Chris became the new owner of this incredible ’33. This car was built around a custom body, but the real magic is found under the skin. There’s a 383 Chevy small block under the hood and this custom was a pioneer in the clean engine compartment look.

There are a number of pieces to the puzzle in this custom Ford and many of them were cutting edge back in 2002. There’s a rear-view camera on the car – that innovation was rarely seen twenty years ago.

The paint is Tangelo Pearl with complimentary flames. This ’33 Ford has been featured in numerous magazines and it’s also picked up a truckload of trophies over the years.

Chris said it’s won several World of Wheels awards and–as mentioned earlier–it won the 2003 ISCA Western Rod trophy. In fact, Chris said he’s won so much hardware, his “house is too full so he’s not going to enter it so other guys can win”.

The only drawback is the driving experience. This car was built for show, so it’s not very comfortable to get into, plus the roof is so low Chris said he has to “duck down to see out the windshield”. He’s okay with short runs around town but the prospect of a long haul is definitely not in the cards.

Jackie Campbell wanted the last word on this beauty because it’s such a piece of his dad’s legacy: