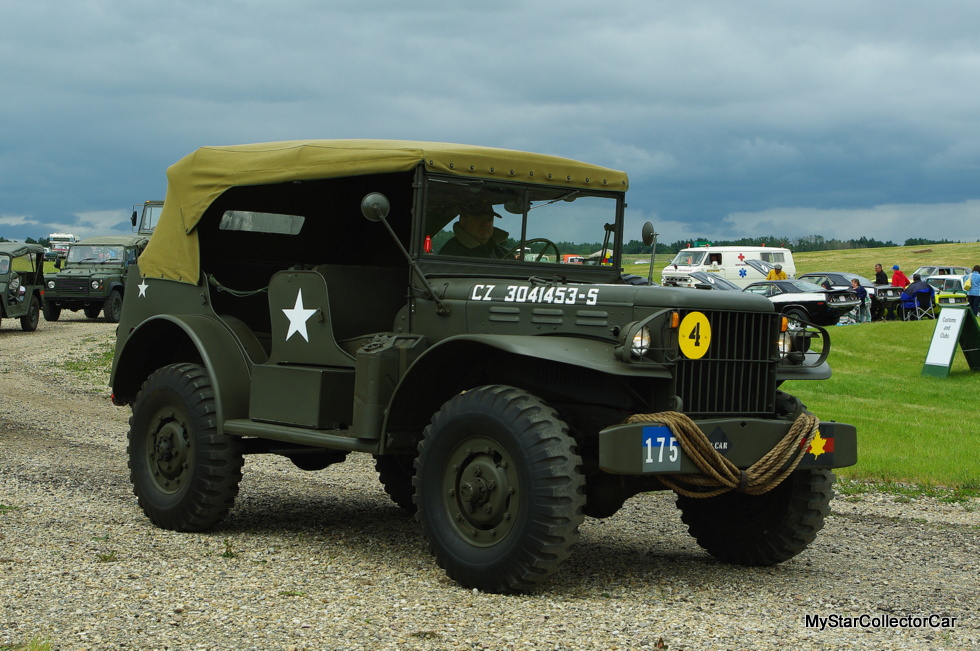 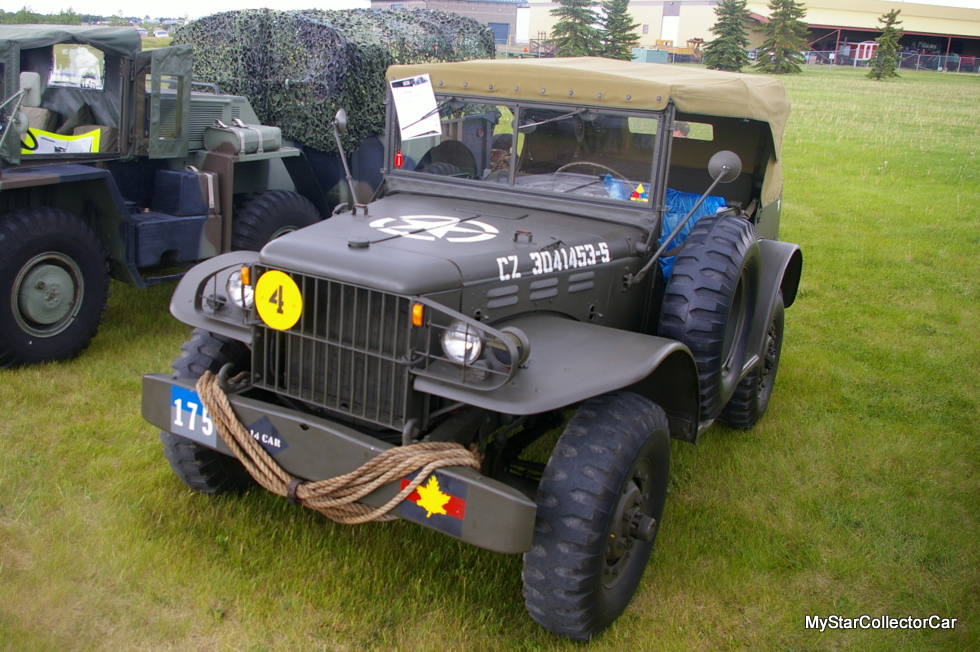 We spotted an old WWII veteran at a show and it was not a typical vet because this one had four wheels.

It was a 1943 Dodge WC56 Command Vehicle meant to shuttle around the brass during the war.

The Dodge’s owner was Jamie Melo and he was part of a convoy of military vehicles at the show. 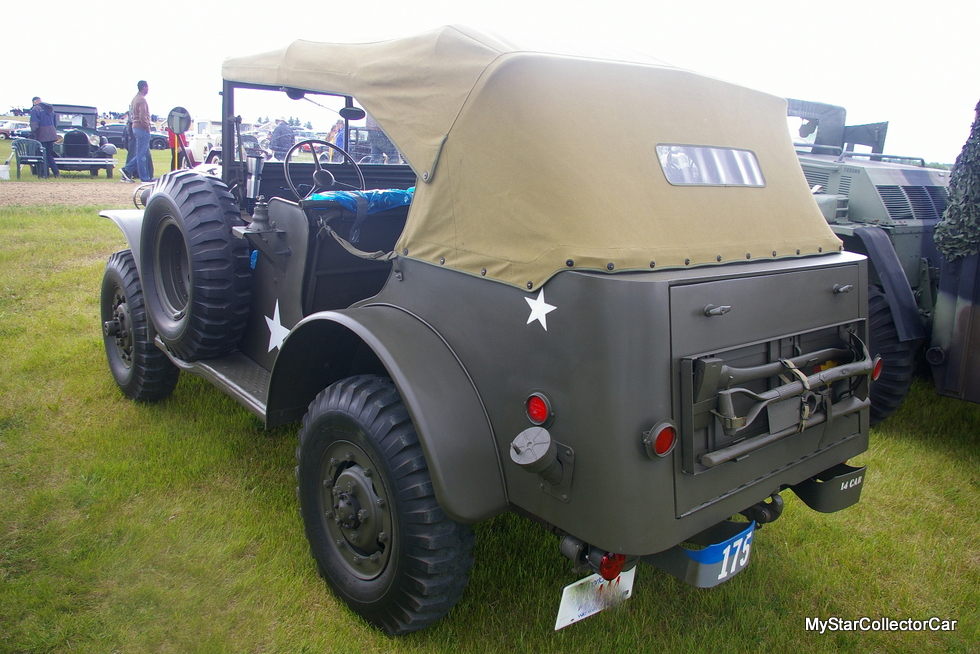 ‘His WC56 was based upon the legendary Dodge Power Wagon which was a hard-working truck that was famous for its Clint Eastwood-tough looks and ability to take a licking in very unfriendly conditions.’

No situation is tougher than a battlefield and the armed forces version of the Power Wagons could handle the rough stuff in WWII. 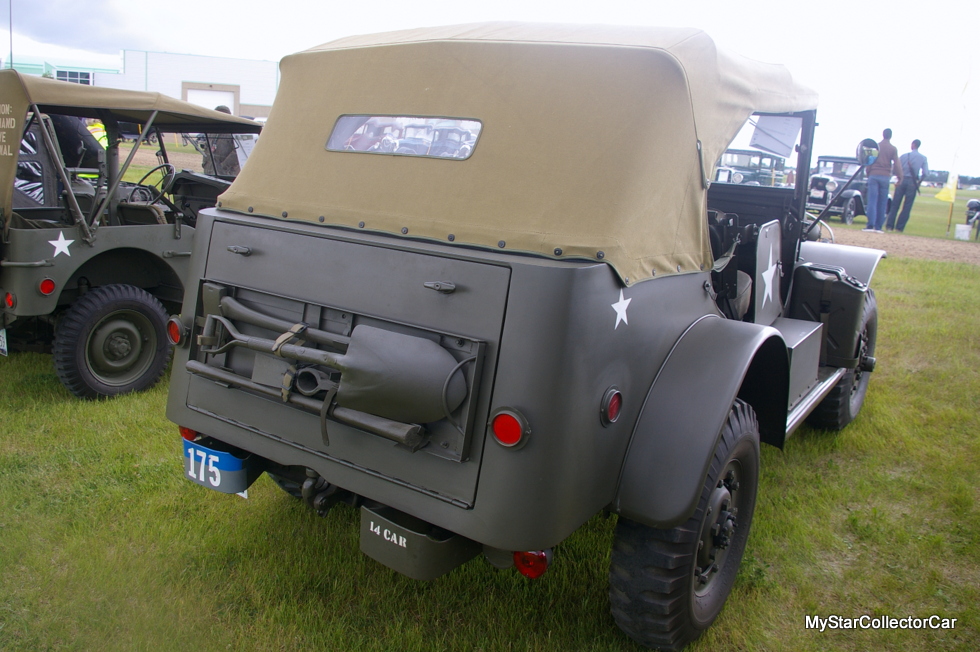 The WC56 was over 5000 lbs. of toughness and was able to hold its own in battlefield conditions. Jamie was unable to pinpoint the service record for his Dodge war wagon because the records for these vehicles were not kept during the war.
Jamie was able to find out the WC56’s last service location was Whitehorse in Canada’s Yukon, but its service record during WWII will remain a mystery. One thing is certain: this beast of a vehicle was ready for anything during the war. 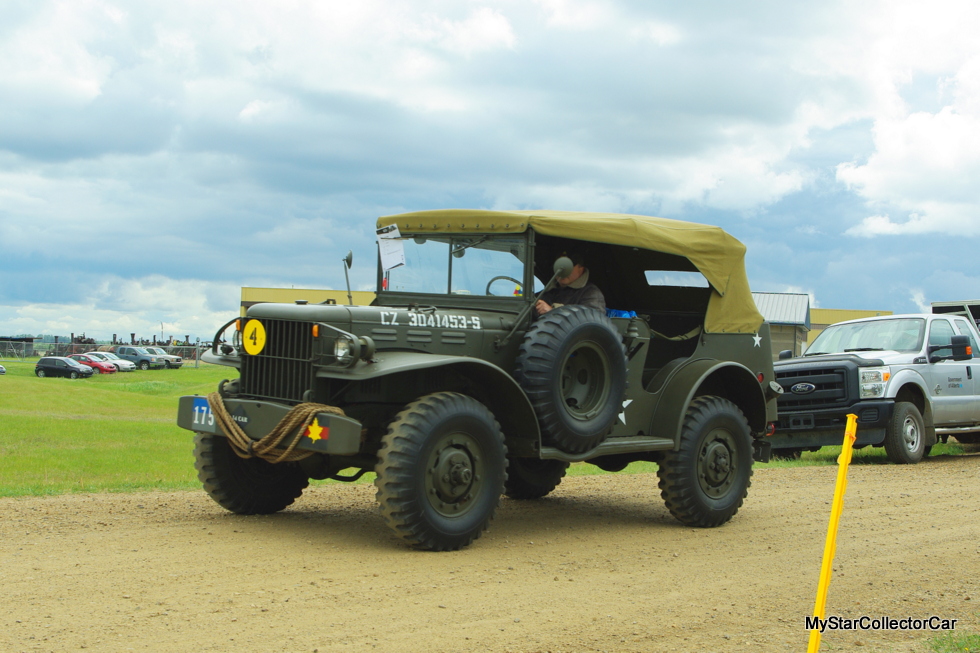 The truck was a designated command vehicle so it has a massive tube radio that gave passengers an ability to communicate with troops over an extended area. The radio required a 12-volt system to power up, and this extra juice was a standard feature for WWII vehicles because a typical (at the time) 6-volt electrical system was not enough power. 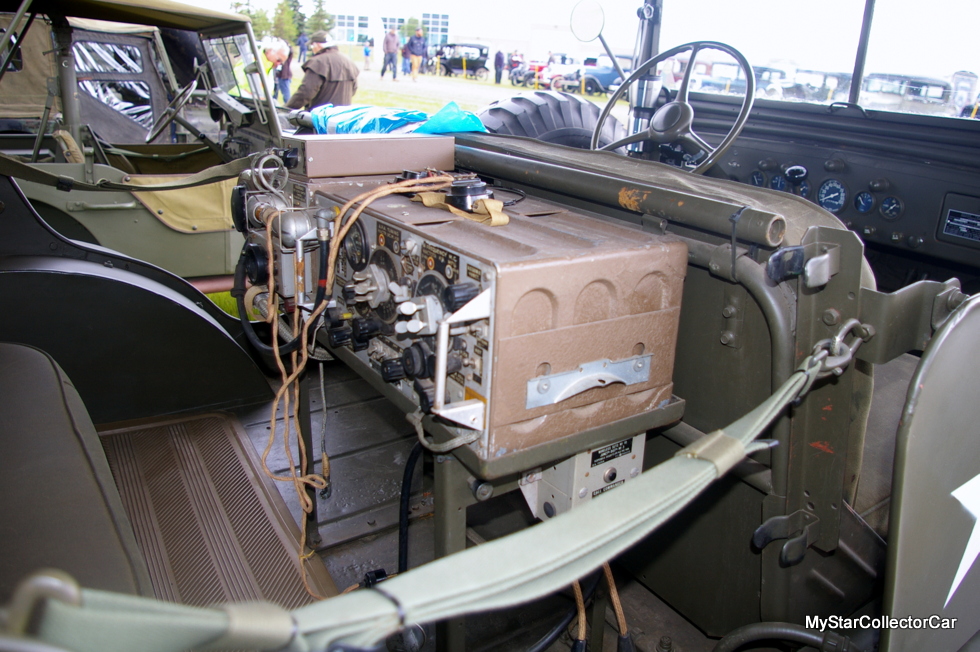 Jamie pointed out a surprising feature of the WC56: it actually ran fairly smoothly down the road for a large vehicle based upon a no-nonsense truck platform. Jamie told us “it drives really nice-not as bumpy as one would think”, in his words. 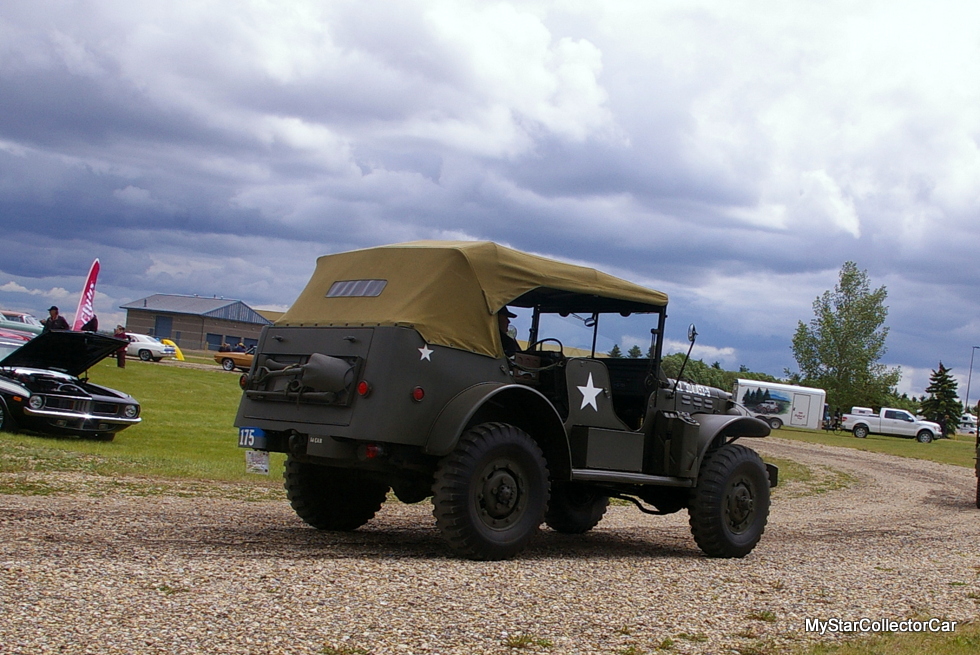 The seats have extra cushion support with bigger springs, so maybe rank had its privileges when it came to creature comforts in armed forces vehicles during WWII. 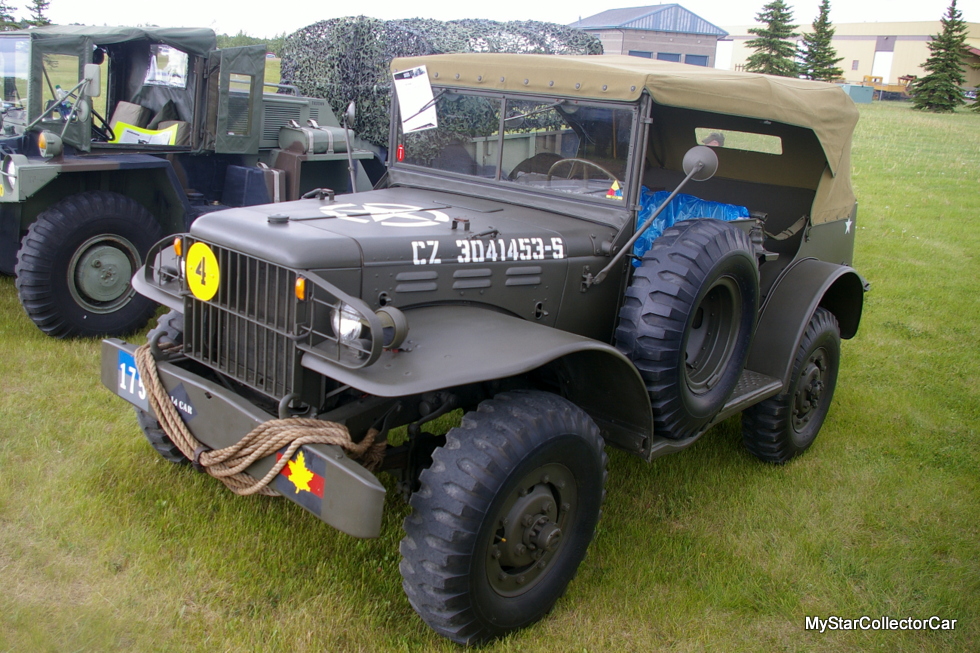 In fact, Jamie had driven the WC56 to the show, which was well over an hour away via the secondary highways from his home at a steady 45 mph pace. The command vehicle has the famous flathead six to move its 5335 lbs. down the road and vacuum wipers to keep the windshield free from rain. Wipers and engine both work better headed downhill according to Jamie. 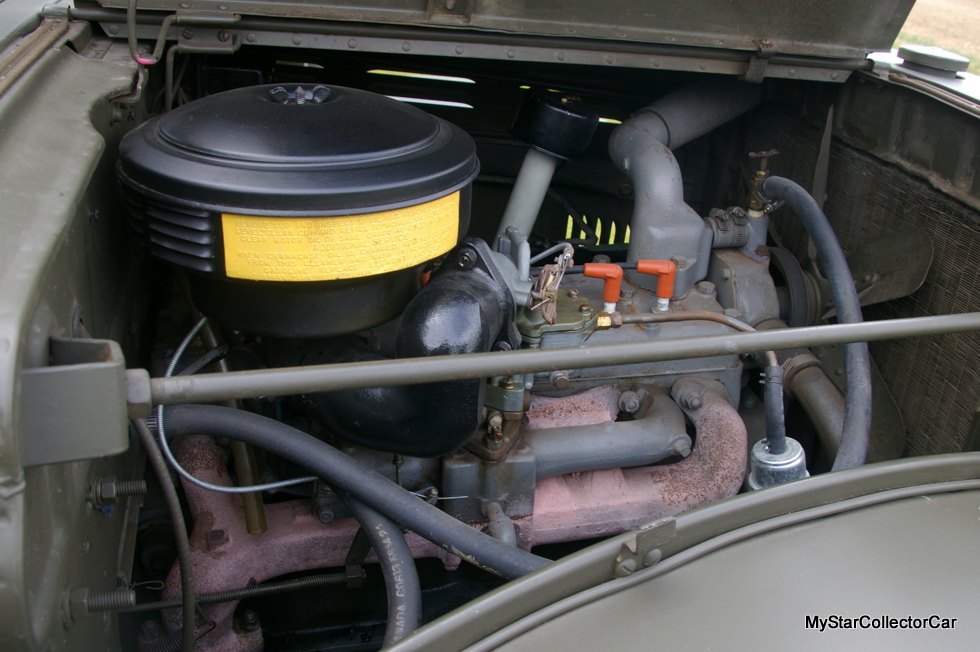 None of our MSCC readers will be overly surprised to learn that Jamie gets plenty of attention when he takes his Dodge on a road trip. Most of these vehicles have been lost to the scrap heap or confined to a museum with no chance to see the open road again. 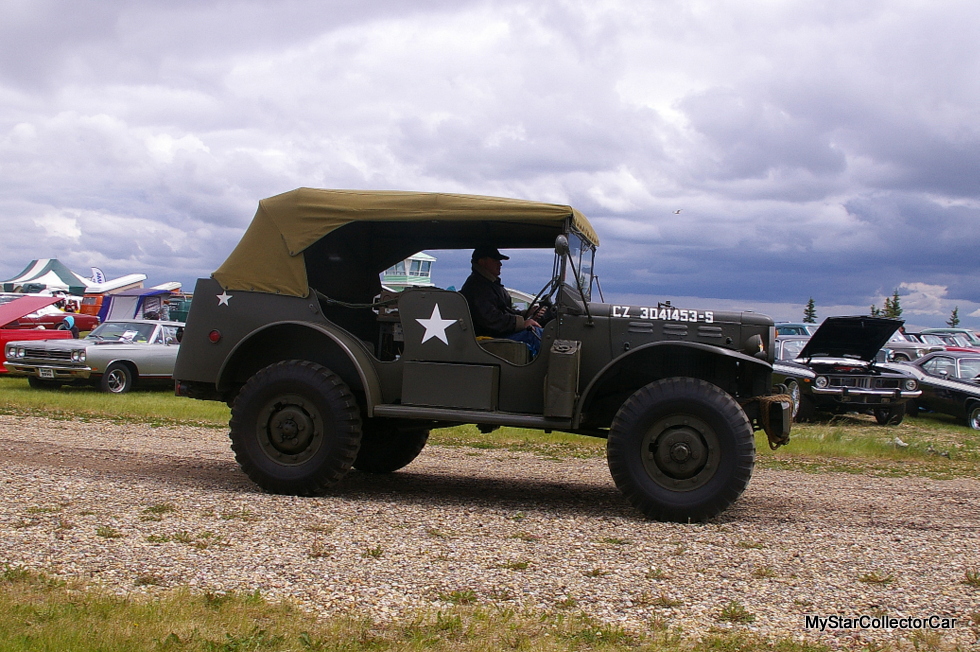 Hats off to Jamie for letting a piece of history go on another adventure.