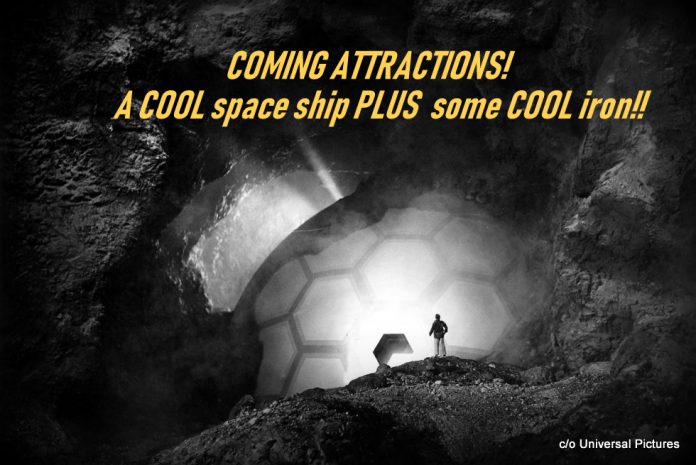 It Came From Outer Space’ may well have been one of the worst sci-fi movies ever made during a hot 1950s market for flying saucer movies. The plot was razor-thin, the acting bordered heavily on mediocre, and the special effects fell well short of special.

In short, this movie was likely more responsible for unplanned drive-in parenthood episodes than most movies from that cinematic era.

However, there was a reason for MyStarCollectorCar to watch ‘It Came From Outer Space’ a few weeks ago: The cool old iron in the movie. Just for the record, none of our interest in the vehicles included the cheesy flying saucer in the movie.

The main character in the movie was an amateur astronomer who spent most of his time chasing stars via his telescope instead of chasing his fiancée in his very cool 1952 Ford Crestline convertible. Priorities aside, he was at least partially cool every time he got behind the wheel of his stylish drop top- a car that likely made him cooler in the eyes of his future bride.

The guy witnessed the crash of a flying saucer and hot-footed it with his fiancée in the ’52 Ford to the site. The crash location was dangerous, so the guy reported the incident to the local authorities and returned to the site.

The police headed to the crash site in a 1952 Ford two-door sedan and the outside agencies had a 1951 Mercury Woody wagon for transportation. The vehicles were simply then-late model movie props for this 1953 movie, but they are not common in 2019.

In fact, the ’51 Merc wagon would draw plenty of attention at any car show in our modern era, along with serious dollars at an auction.

Crappy old movies can be an education for us here at MyStarCollectorCar and ‘It Came From Outer Space’ followed this pattern when the producers trotted out a 1949 Dodge Route Van that was used by a TV crew.

The Dodge Route Van enjoyed a brief production run from 1948 to 1951 and provided a solid choice for delivery services like mail and milk at the time. The use of a Dodge Route Van as part of the movie vehicles played to its strength as a hauler during the late 1940s and early 1950s, including TV crews from an early broadcast era when their video equipment was large, bulky and heavy enough to cause hernias.

The appearance of a Dodge Route Van in the movie required some research on our part because we were not exactly sure about their actual identity. Older MyStarCollectorCar may remember them from a bygone era of home delivery services when the costs were included in the price of a loaf of bread or gallon of milk in a glass bottle.

A 1948 Ford F-1 pickup truck was also featured in the movie, along with a 1947 Chevy Advance-Design truck that also had a bucket on it. Both were work trucks and their role in the movie was definitely part of the blue-collar lifestyle portrayed by their owners in the flick.

Last but most certainly not least, was a future star in the car hobby: A 1950 Ford Custom two-door sedan–more commonly known as a Shoebox Ford in today’s car hobby. This legendary Ford only had a bit part in the movie, but it is a big star in 2019 car guy circles. The flying saucer in the movie had little appeal for us here at MyStarCollectorCar, but the very cool old terrestrial rides had massive appeal.

Two thumbs up for them.