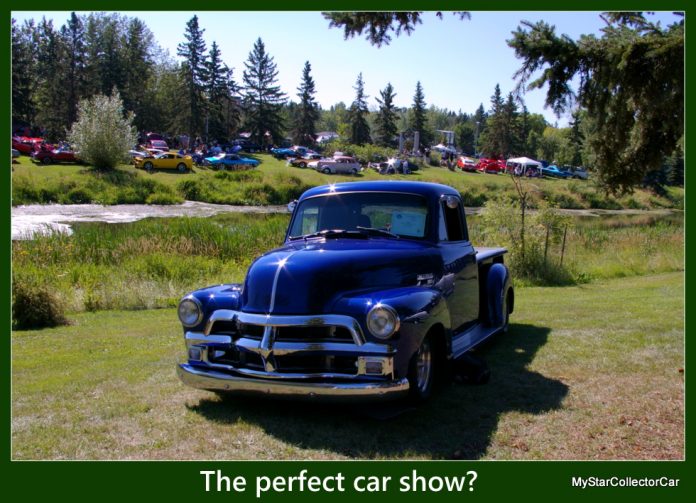 Car shows are a bigger gamble than a falling down drunk playing cards at a blackjack table in Vegas.

There are more moving parts than a moon launch and just about as much risk if things hit the ditch.

That’s why it takes a combination of many things to host the perfect car show.

Your biggest gamble is the weather. This year was particularly bad because some highly successful car shows took a thumping because rain (and snow) turned an event into an endurance test. I’ve been there at car shows with my soggy notebook and camera during rain that made people start thinking about lining up animals and building an ark—it’s fun on the same scale as a root canal is fun without an anesthetic. I can’t imagine the pain the organizers feel after a year of planning and hard work gets washed away in a heavy rain—or blizzard.

The human factor is another big player in car shows. Anyone who deals with the public knows how nasty things can get when things go askew…and things can go seriously askew at a car show. If someone plunks their toddler on the hood of a classic car for a photo op at a show, things can get really ugly because very protective parent is going to meet very protective owner. You’ll need a skilled referee and possibly a fully-equipped police riot squad to sort that one out.

Volunteers are a key piece of the puzzle at a car show. You’re asking people to put a 12-hour, unpaid shift in (hopefully) hot weather to make your show run flawlessly. They have to deal with the public (see above paragraph) and literally direct traffic to the proper place. The guy who pulls in with his Kia SUV gets sent one way and the guy who shows up in his classic for the show goes another way. Hopefully, the Kia guy doesn’t flip out because he can’t park in the same place as the classic, but if he does—the volunteer is on the frontline for the Kia guy’s bad performance. On behalf of car show spectators—thank you volunteers.

You’re also going to get a battle between new and old iron at car shows. This has really cropped up over the last decade and it’s unsolvable because you’re going to have strong camps on both sides. Think of it as the Middle East without the bloodshed—yet. There are no good answers for how to solve the great divide between traditional iron versus non-traditional iron but every car show that allows a mix of years ranging from 1905 to 2019 is going to get feedback…so be advised.

One more thing. If you schedule your show against a dozen shows in the same area you’re going to be disappointed in the results because car guys have their favorites. If your show doesn’t make the grade, you end up with a show for you, your closest friends and your family.