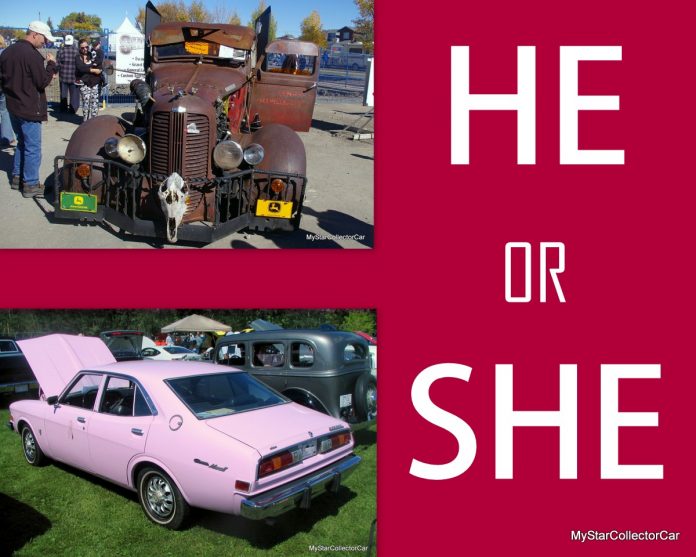 A recent TV auction had a new guest hostess as part of the broadcast crew.

Her credentials include a long association with Maxim magazine and various MTV programs. However, she is a tad thin in automotive expertise in any form since Maxim is essentially Playboy magazine with more clothes on the models, while MTV is home turf for self-absorbed adolescent narcissists.

Nevertheless, she was deemed a good fit in a TV automotive auction where actual knowledge about vintage vehicles is a handy asset. The woman brought nothing to the table, other than pinup good looks and an annoying habit of attaching a female gender to every vehicle she showcased for her TV audience.

The most glaring example of her gender reassignment missteps occurred when she introduced a custom Humvee as a “she” during her TV bit. Humvees are large-and-in-charge vehicles with deep roots as a military machine bristling with weapons on a battlefield. They are not typically associated with the female pronoun because they do not remind people of Mother Theresa-quite the opposite in fact because Humvees are not warm and fuzzy vehicles.

Her female gender assignment to unusual vehicles continued throughout the three-day auction and got in the way of real insight because she possessed no actual knowledge about them. Other examples included muscle cars that leaned heavily toward a macho image but were also labeled “she” by the hostess.

Mute and fast-forward buttons always get a workout during the TV auction’s broadcasts, depending upon the circumstances, but the new hostess presented a difficult decision because she was simply on-air eye candy, so we chose the mute button.

We at MyStarCollectorCar realize that many car guys and girls address their vehicles as “she” because we have taken hundreds of interviews with them, but most of their gender choices are based upon the old ride’s background.

A VW Bug could be labeled a ‘she’ (with all due respect to Herbie the Love Bug) because of its lovable looks. The Beetle was always a non-threatening car that was embraced by kids, not unlike the idealized notion of motherhood, so a VW Bug with a female name would not be a reach.

Another vehicle with a female name is any Plymouth built between 1957 and ’59, mainly because of Stephen King’s horror novel (‘Christine’) and the subsequent ‘Christine’ movie. Christine was an evil 1958 Plymouth that killed her owners’ enemies, along with anybody else that got in her way-including her owners.

Fans of the Forward Look cars know the 1957-59 Plymouth models bore a basic resemblance to each other, but there were enough style changes to differentiate one model year from another one. Fans of the Christine movie simply lump all three Plymouth model years together and call them all Christine, consequently most 1957-59 Plymouth owners are used to the female gender assignment for their cars. These cars may not be as cute as a Bug’s ear (or fender for that matter), but the Stephen King and the movie made them female.

There may be no hard and fast rule for a female or male pronoun attached to a car, despite the best efforts of the hot TV auction chick with zero car knowledge.