I‘ve been thinking about Canis lupus familiarus a lot lately-yup, dogs. I know that dogs are incredibly black and white in their thought processes so any ride makes them ecstatic whereas we look at things in many shades of gray. That’s why dogs will never question why they have to ride in the back of an open pickup truck.

But their masters should because the Utah Humane Society estimates 100,000 dogs die every year from injuries suffered from 85 mph swan dives out of trucks.

Why guys want to take their faithful companions on a trip where Spot gets the 3rd class truck bed seat is a mystery that rivals why moronic “Reality TV” producers don’t go to jail for the wholesale slaughter of viewer IQs.

In fact, you could successfully argue that guys who shove Spot into a dangerously idiotic riding scenario probably have a lifetime commitment to either watching or being on the Jerry Springer Show.

This is wrong. If you don’t value your dog enough to let him ride in the cab then by all means try and listen to that little, rational part of your brain that’s begging to be heard. The one that should say “Spot in the back of the truck” is a really stupid, lazy, inconsiderate, irresponsible thing to do unless you’re a farmer or rancher on the job.

And don’t give me that crap about freedom, property rights or any of the fall back positions typically taken by the hard of thinking because when your property (that 190 pound St. Bernard) bounces out of your truck at 85 mph and comes through my windshield…

And I’m lucky enough to survive the impact with even 30 % of my pre-impact mental prowess and enough manual dexterity to sign a legal statement I will make the rest of your life a series of hellish lawsuits for your wanton act of sheer blatant stupidity. Lawsuits that will follow you and your family through the next 4 generations..

That doesn’t even take into account the fate of the poor dog. They rarely survive bouncing down the freeway in front of fully loaded Kenworths and if you think a Minnesota winter is cold try facing it in the back of a pickup truck (-153 and all the fresh air you can handle).
Fur coat or not, if Fido wasn’t neutered before that little sub-zero jaunt around town he won’t need it afterwards.

But this logical stuff just doesn’t register with guys who make their dogs ride in the back of trucks. They are the single best argument against natural selection because if Darwin had it right these guys wouldn’t own dogs because they can barely spell “dog”.

But they do own dogs and even when they park they leave their untrained, half-crazed devil-dogs out in the public where a 6 year old’s throat is a simple tailgate leap away. You can’t reason with this kind of stupidity-you can simply react with yet another “common sense” state control edict.

That’s the problem with unchecked freedom-the morons eventually ruin it for everyone and “this dog rides in back of pickup” is yet another example of why we eventually end up with a big list of nanny state rules.Some states like California have really picked up on this issue-to the point where Fido has to be belted in even inside the vehicle and many other states such as (Oregon,Mass.,Maine,Minn..Florida,R.I.,Wash.Hawaii and others) have cage and/or cross tie truckbed rules.

But the dogs deserve better than some clown putting them in harm’s way because he doesn’t want to get the leather seats in his Quad-cab dirty. And after we see too many collies doing 60 mile per hour pirouettes out of Silverados on freeways more states will give us legislative guidance on the issue-caving in once again to people who are too stupid to own dogs.

Morons-1 rational human beings-0.And we get more Big Brother do-gooder rules as a bonus prize thanks to these non-thinking clowns.

But at least the dogs get a fighting chance. 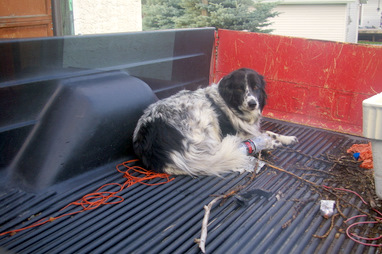