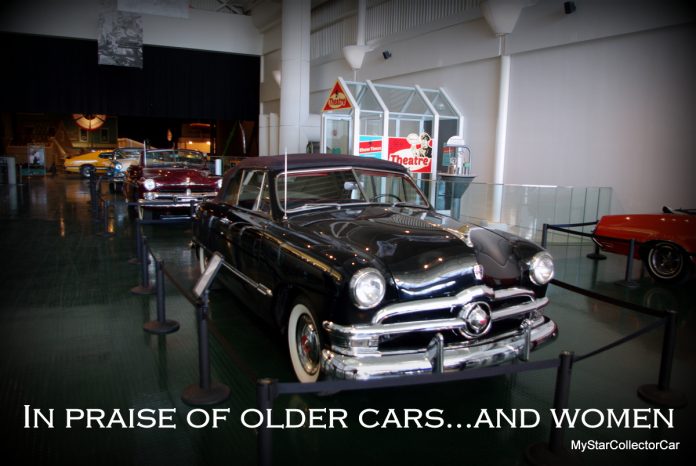 No car guy would be foolish enough to compare/discuss women and old cars in the same article but we at MyStarCollectorCar are not that bright, so we veered right into this topic.

‘In Praise of Older Women’ was made into a 1978 movie that presumably followed the same plot as the book. We are not keenly aware of either the book or movie in a “read-it-or-watched-it” sense since we did neither–but we liked the title enough to blend it with the car angle because MyStarCollectorCar will continue to celebrate the vintage vehicle in all of its glory.

The comparison between women and old cars may get off to a rough start if one used the standard age requirement for antique status as the term applies to cars: over 25 years since it left the factory. 25 years is still young for humans and MyStarCollectorCar leans heavily toward vehicles from older eras because they tend to reflect style and grace from the past.

The same notion could be applied to women who were born during a bygone era because many of them are able to retain the same sense of style and grace in a human sense.

A well-preserved car from the past is always a source of interest for us here at MyStarCollectorCar, particularly if the vintage vehicle retains its originality. However, many vehicles from the past have been modified or customized into something totally different and the improvements are well beyond the factory specs for the vintage car or truck.

The vehicle’s history may even have been completely erased during the process and the vintage ride may be given a brand-new identity during the rebuild process. There are plenty of plastic surgeons who are more than willing to apply their skills to a similar restoration process for women and attempt to erase their visual history in the vain pursuit of eternal youth.

The results of cosmetic surgery on women may be similar to the vintage vehicle’s results because this restorative process comes at a cost since it alters the history of both people and machines from the past.

It is our steadfast belief here at MyStarCollectorCar that beauty does not diminish for either women or vintage vehicles over the passage of time. Both people and cars represent a timeless quality that is never lost over the years and reflects their personal history in a profound way.

The passage of time is a cause for celebration in MyStarCollector’s opinion. The peaks and valleys encountered along the way may be figurative for women-and literal for vintage vehicles-but they are part of their journeys.

There will always be plenty of reasons to praise both vintage cars and older women. MyStarCollectorCar intends to stick to the cars but wanted to salute the women on our pages-particularly if they’re also car girls.