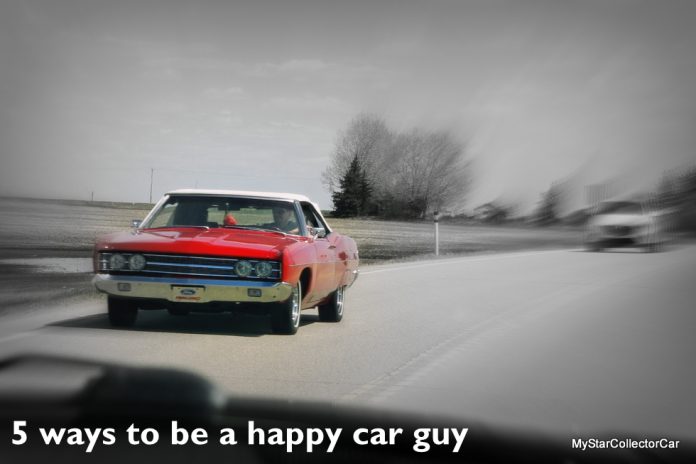 There are many paths to unbridled happiness–at least according to the massive hordes of self-help gurus who came armed with post-graduate degrees in the social sciences and staved off chronic unemployment by writing a best-selling book about how to find happiness.

On a brighter note, the road to happiness from a book worked out very well for the people who write this crap because they made a fortune off the gullible pigeons who bought their book.

Fortunately, MyStarCollectorCar has a viable solution for the best road to happiness for car guys: Buy an old car and then find a real road on which to drive your classic ride. In fact, we can list five good ways to be a happy car guy.

The first way is pretty simple: Do not worry about the two extra doors on your vintage car. Many car guys hold out for two door hardtops and convertibles when they search for the perfect car. This approach is similar to a bus boy who bears a striking resemblance to Moe Howard chasing after a young Farrah Fawcett during her poster girl years.

In either case, the pursuit of hot car or hot babe means happiness is a long shot at best.

A car guy should look at vintage four-door sedans because they are both reliable and affordable compared to two-door hardtops. A four-door sedan will make them happy because it will not make them car-poor like a two-door version.

The second way to find car guy happiness is buy a modestly powered car. Many car guy seek an expensive factory big block car because they offer the legendary brute force throttle response that may build an alpha male illusion for them.

Vintage muscle cars were largely untamed beasts that required a supremely talented driver to keep them on the road. The fire-breathing road monsters from the past got single digit MPG ratings on their best days and now command a purchase price that would retire the national debt in most developing countries.

It’s a pretty safe bet these traits would not provide a road to happiness for most car guys and an unplanned visit to an ICU or divorce court (due to a recent car accident or purchase) would not be out of the question.

However, a vintage ride with a smaller corral of horses under its hood will be less costly and well within most drivers’ skill sets. They will also find a more direct path to car guy happiness if they are not in traction from a big block-equipped vintage car accident. Plus, the car will have a smaller price tag on it and may prevent unwanted divorce from a non-car bride.

The third way for car guys to hit the road to Happy City is to pick a less popular car brand. Most car guys will concentrate on the best of the Big Three and forget about the less popular brands built by the smaller companies.

The truth is the offbeat car brands are typically less costly and provide more of a conversation piece for their owners. They come with their own style and flair because these cars are the cool outliers in the car culture. MyStarCollectorCar attends enough shows to gauge public interest in these orphan car brands and noticed they are rock stars whenever they are in a show.

If the road to car guy happiness is paved with plenty of positive attention, then an unusual ride may well be the social magnet that attracts a generous amount of interest.

The fourth way to find happiness with old cars is pick a driver-quality vehicle. A vintage car that is less than pristine offers happiness is a very unique way because the investment will be lower and the anxiety levels will be non-existent when the car is out of visibility range.

Many car guys need to have a panoramic view of their parked classic cars because their vintage rides have undergone a major and expensive restoration and the owners want to protect their investment from harm. The possibility of a door dent or a key scratch on their perfectly restored rides are the kind of horrific scenarios that will have them wake up screaming in the night because of heightened levels of justifiable anxiety.

A driver quality vintage car will give them peace of mind and a healthier bank account because of the less expensive version’s lower price tag. MyStarCollectorCar believes a driver-quality old vehicle is a basic recipe for happiness in car guy world.

The fifth and final path to happiness for car guys is pretty simple and this basic philosophy runs through this article: Drive ‘em. An old car is both sentimental and temperamental.

The sentimental side of an old car is its ability to preserve fond memories while its temperamental side is designed to create new memories through unplanned adventures behind the wheel.

An old car has an unpredictability factor and makes every journey a special occasion that can be both a problem and a solution during the trip down memory lane. However, these car adventures (past and present) are the root cause of unbridled happiness in car guys.

We at MyStarCollectorCar firmly believe that happiness is a long shot when it comes to advice books, but old cars deliver that warm and fuzzy feeling on a regular basis.