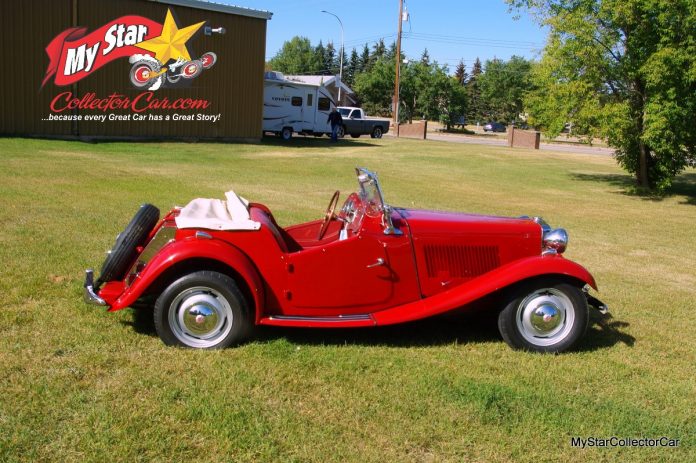 The MG TD was introduced to the public in 1949 as the newest model for the famous British sports car builder.

Bob and Dave Weidner are two of those car guys, although the brothers have a much broader base of interests when it comes to the vintage car hobby. The Weidner brothers were very young car guys when their family became the owners of a 1950 MG TD in 1957.

The Weidner name has long been associated with the automotive field in Lacombe, Alberta Canada because the family has owned a thriving GM dealership (Weidner Motors) in the community since the mid-1950s, so Dave and Bob were second-generation car guys because their father Lou was a consummate car guy who sold, raced, and owned cars over the years.

Therefore, a classic British sports car was a good fit with the Weidner family because it was a retro ride that answered the bell in terms of classic style and race-worthy performance 65 years ago when the Weidners bought it.

However, even the drive home with the car was memorable because the MG had a wonky clutch that somehow allowed the clutch pedal to grab Dave’s shoe and forced him to keep his foot in an awkwardly upward position for the entire trip home.

Dave and Bob both used the MG as a daily driver during their high school years, along with numerous racing events in their area when they used the car for both summer and winter meets.

The winter events took place on a frozen lake and tested a driver’s ability to compete on an ice course. Bob recalled a decision to use winter grip tires (from a trade-in) on the MG was not a good one because they were unable to help him navigate a turn on an ice track, so instead he drove right into a snowbank.

Winter was not a friend to British sports cars designed to handle more moderate temperatures in England. The cold factor became abundantly clear one bitterly frigid New Year’s Eve when the MG TD would not start and required use of the company tow truck on New Year’s Day, along with a host of other vehicles, according to Dave, because he was the tow truck guy that day.

The Weidner boys also took a hands-on approach to the repaint on the MG, a process that also temporarily erased their fingerprints during the sanding portion of the festivities. The sports car appeared to have numerous paint layers when it was given a red paint scheme back in the late 1950s, so it was not an easy job for Bob and Dave.