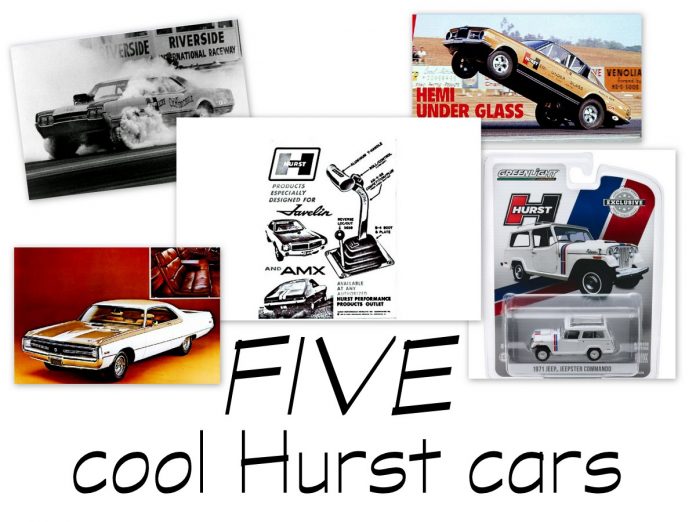 Hurst is one of the most famous brand names in the car hobby–rightfully so–because they refined the manual and automatic shifter to a level no manufacturer could match on the assembly line.

The Hairy Hurst Olds was every kid’s dream car model because it represented every single cool feature of a Hurst Olds…times two. The Hairy Hurst Olds had not one-but two big block 425 V-8s pumping out a combined 2000 horsepower to all four wheels via two Olds Toronado drivetrains. It was the scariest, loudest smoke show you’ll ever see at a track.

The second example was the legendary Hemi Under Glass Barracuda. There were several versions of this car but the first one made the biggest noise.

The Hemi Under Glass combined the raw, insane power of the Gen II 426 Hemi with the lightweight A-body Gen I Barracuda. This marketing was sheer genius for Hurst and Plymouth because the Elephant Hemi was showcased in plain sight under the massive rear greenhouse of the ‘cuda. This combination created one of the wildest wheel standers of the Sensational Sixties.

AMC got into the act in 1968 with their Javelin/AMX lineup. Hurst gave these new entries instant credibility with the guys who liked to run for fun on the street.

Better yet, AMX and Javelin buyers knew their Hurst shifters would hold up under the pounding they’d take behind the 390 AMC big block. It was win-win-win for Hurst and AMC back in ’68 because a lot of guys underestimated the lightweight ‘Ramblers’ and lost to them in a very humbling (sometimes costly) way if dollars or pink slips were in the mix.

Very few people would look at a massive C-body Chrysler and see performance potential, but those people have short memories.

The legendary Chrysler letter cars were clear evidence that size didn’t exclude muscle. Hurst knew that so they put the Hurst name (in big letters) on the Chrysler 300H. Chrysler added some serious handling equipment and the rare 1970 300H was born. They didn’t sell many, so the big Hurst C-body is suddenly on every Mopar fanatics with list over 50 years later.

The final off-the-beaten-path Hurst model came in the form of the 1971 Hurst Jeepster. Hurst lent its name and shifters to these Jeeps because Jeep wanted to move more of their Jeepsters in their showrooms.

Hurst added their manual and automatic shifters to the Jeepsters, and the power came from a standard  V-6, so the Hurst equipment wasn’t pushed too hard. They didn’t sell a lot of Hurst Jeepsters in ’71 so–like the 300H–they are highly prized in the Jeep world.

What does all this tell you? Hurst was everywhere in the 60 and 70s.