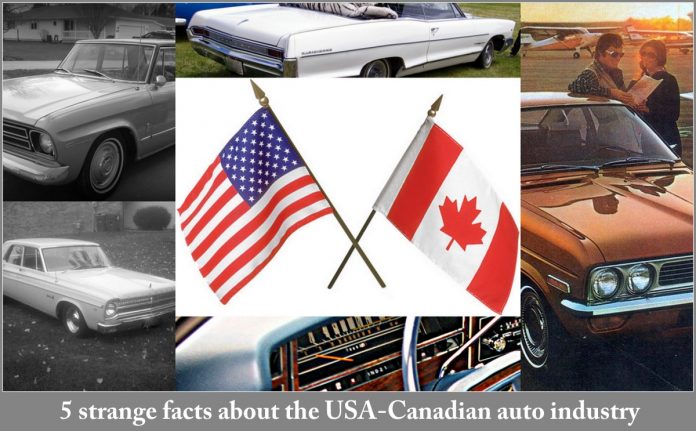 The United States and Canada share the longest undefended border on the planet, along with a long history as friendly neighbors, although the War of 1812 tested their relationship in a big way.

However, this war was essentially a grudge rematch for England against their former colonial thrall in the Americas because the Brits took a licking during the first conflict. Eventually Canada also became an independent country in 1867 and were able to avoid a dust-up with England along the way to a long friendship with the United States.

This brief history lesson is MyStarCollectorCar’s way to introduce five unusual facts about the Canadian and American automotive legacy from the past.

The first item of note took place in 1965 when Chrysler introduced the newly designated Plymouth Belvedere and Dodge Coronet B-Bodies into their intermediate lineup in the US, mainly because these vehicles were not available in Canada in ‘65.

The B-Body Mopars became available to Canadian buyers in 1966, but they were non-existent for an interested Canucklehead Mopar buyer who wanted one in 1965.

The second addition to our list: ever heard of an Envoy or 1971-72 Firenza? Then you are either English or Canadian because these highly disposable British-built cars were not offered in the United States. The Envoy was a Vauxhall lookalike that was sold by Chev-Olds dealerships while the Vauxhall was sold at Pontiac-Buick dealerships in Canada. The Envoy name was resurrected in the North American car market during the late 20th and early 21st century as a GMC sport utility model, but the original English version was never sold by American GM dealerships.

The Firenza was also originally a British car built for the Canadian buyer in time for the 1971-72 model years. The cars were essentially a Vauxhall Viva and were designed to set the world on fire in a country with plenty of ice and snow like Canada. Even frugal Canadians did not warm up to these cars in a manner needed to keep them as a worthwhile purchase in Canuck Pontiac dealerships.

The Firenza name was resurrected by Oldsmobile for both the US and Canada during the 1980s, but it was not destined to last long and folded long before the entire Olds fleet headed to the big dealership in the sky by 2004.

MyStarCollectorCar’s third fact from the past also involves the death of a famous automotive brand. Studebaker had a long legacy that began as a wagon builder in 19th century United States and ended as a car-builder in 1967 Canada.

The most famous location for Studebaker vehicles was their South Bend, Indiana factory but the last Studie left this US facility in 1963 so the vehicles were subsequently built in Hamilton, Ontario until the final Studebaker left the Canadian factory in 1966.

The famous Studebaker family of cars met their untimely death in Canada, despite a strong association with South Bend, Indiana in the States.

The fourth addition to our oddball list is the Pontiac brand from the past. A 1965 automotive free trade agreement eliminated many of the barriers between Canada and the United States. The two countries built separate models for their car buyers until the 1965 agreement made it easier to cross the border without massive tariffs to block the way for car models and their parts. The agreement was not implemented in time for the introduction of the 1965 Belvedere or Coronet models to Canadian buyers, nor did it bridge the gap between American and Canadian Pontiacs.

The big difference was an American Pontiac was a larger and wider standalone version compared to the smaller Chevy-in-Poncho-drag Canadian Pontiac models for many years prior to the full force of the new Auto Pact agreement that was ratified in ’65.

Most Canadian car guys have encountered the sizable differences when they attempt to buy parts for their vintage Pontiacs and simply buy Chevy parts when it comes to their Canuck Ponchos’ powertrains and chassis components.

Acceptance of the vintage Canadian Pontiac is not a universal concept for American car guys because they have trouble believing any Pontiac ever left the factory with Chevy parts-but it be so in Canada.

The fifth and final difference between American and Canadian vehicles occurred in 1977 when the Canadian government (under the first Prime Minister Trudeau’s puzzling disdain for all things American) switched Canada to the metric system’s kilometers from miles.

Therefore, any car built in Canada from 1977 forward showcases kilometers instead of miles in their speedometers and odometers. The net effect for us here at MyStarCollectorCar is yet another good reason to gravitate toward older vehicles that are not equipped with metric measurements to remind us of a time before mph was arbitrarily replaced by km/h in Canada.