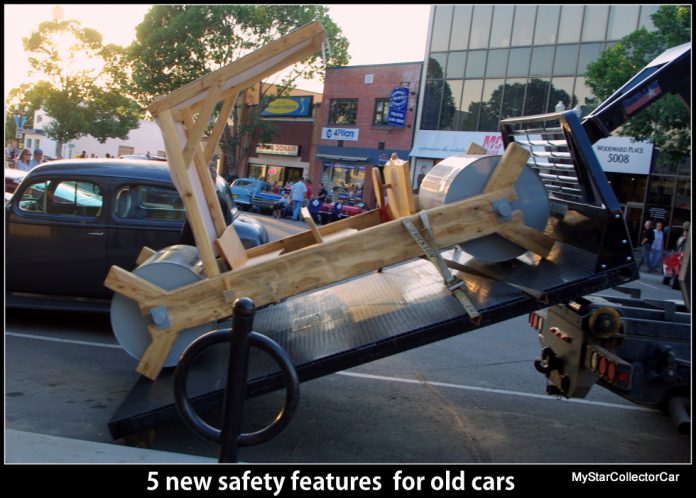 The evolution of automotive safety has moved forward in a big way since the days when Fred Flintstone stopped his stylish caveman sedan courtesy of his two good feet.

However, one can assume that a car guy who would choose to retro fit his classic ride with state-of-the-art safety upgrades would also add performance upgrades into the mix for faster stop and go.

The next modern safety feature for a vintage ride would be a blind spot warning system. Old cars were designed to reflect the style from their moment on center stage so the visual angle was focused on the curves and angles. Little to no attention was paid to the sight lines down the side of the car for the driver.

The emphasis was on style and few automotive designers cared whether a tall fin or large roof pillar got in the driver’s line of vision. A modern blind spot warning system would eliminate a retro problem for drivers who want to know if the lane is clear for their beloved 65-year-old car.

The back end of a classic car is also an area of concern for their owners because of the same body style vs clear rear vision found in vintage rides. Small back windows in some generations of older cars also turned reverse into a high stake guessing game for the driver.

The modern automotive era offers a rear cross-driving warning system that detects hazards before they become part of the lawsuit against owners who are unaware of the objects in their rear path and subsequently crash into them.

The 5th and final addition to our 21st century car equipment list for old iron would be adaptive cruise control. These units monitor traffic conditions and work with the Lane-keeping unit to keep a safe distance between other vehicles while on the road. They are also able to gauge traffic flow enough to bring a vehicle to a complete halt if necessary.

It’s clear that car safety has come a long way since Wilma and Betty invented back seat driving as a deterrent to Fred’s crazed driving habits.

The only question left for car guys is how much of the new tech can be retro fitted on their old iron.