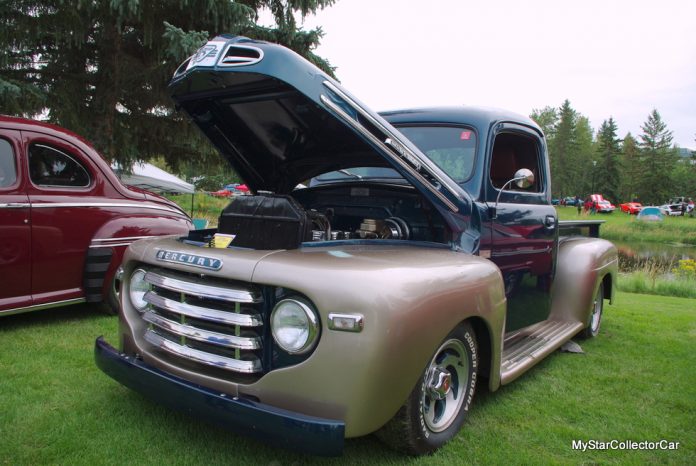 Projects can go from start to finish in the car hobby at light speed or they can span a decade or two before completion.

If you’re in Vegas bet on ‘decade to completion’.

This 1950 Mercury M-47 took 15 years from start to finish so the duration would be slightly above average but the extra years were worth the wait.

Wally Nicklin is the proud owner of this Canadian truck and his goal from the beginning was to build a combination old-school/resto-mod driver and he definitely succeeded. Wally’s truck runs a legendary flathead V-8 but he admitted it “wasn’t the original engine because the original was cracked”.

Wally is a mechanic so he had no problem working on everything under the skin of the Merc and he began with the flathead. He rebuilt it and added the multi-carb setup and refined a few things like the generator—it’s now a mid-90s Buick alternator because it “was the only one that would fit” in the narrow space.

There’s a Mustang II front end under the truck now so it handles a lot better than a stock ’50 Merc truck but Wally regrets not opting for the air suspension over the stock leaf springs. He said it handles much better but it “still rides hard like an old truck”. He may remove a spring to soften it up but he doesn’t rule out an upgrade to air in the future.

The seats are another issue. They’re out of a 2010 Ford Escape and Wally said “they’re comfortable but they could be a little thicker”.

The door handles are an interesting twist. Wally explained how they’re originally from a Ranger pickup and they don’t open the truck door because they are non-functional—this Merc has an electric door popper. Wally likes the confusion people have when they try the door but in hindsight he would have taken the whole Ranger door lock system and fitted it to the Merc.

Wally has a complete set of gauges in the custom-made wooden dash panel so he can monitor everything from rpms to transmission fluid temperature. Professional mechanics work with technical information every day so Wally is confident he knows what’s going on with the flathead.

Wally’s brother did all the cosmetic work on the truck—including the wood in the dash and the truck bed. The Merc is a rolling showcase to his talent because this truck was mobbed by spectators at the car show.

The other concession to this almost all-Ford build is found in the disc brakes because Wally used GM calipers.  He also replaced the vacuum wipers with electric versions and now—thanks to a kit he found—the truck has power steering. He regrets not buying two because he said “the guy who built them went out of business”.

Wally has the truck running like a Swiss watch but he wants it to run a little cooler so he’s replacing the electric fan with a Flex-A-Lite system because they “push air a lot better”. He also has some regrets about the location of the fuel tank because electric fuel pumps “push not pull” so he has to mount it lower for the gravity feed. He had considered placing it where the custom truck box sits.

Despite the 15-year timeline—Wally admitted he walked away from it more than once—he achieved his goal. He has the driver he wanted and the stone chips in the paint are badges of honor because Wally lives by one rule.