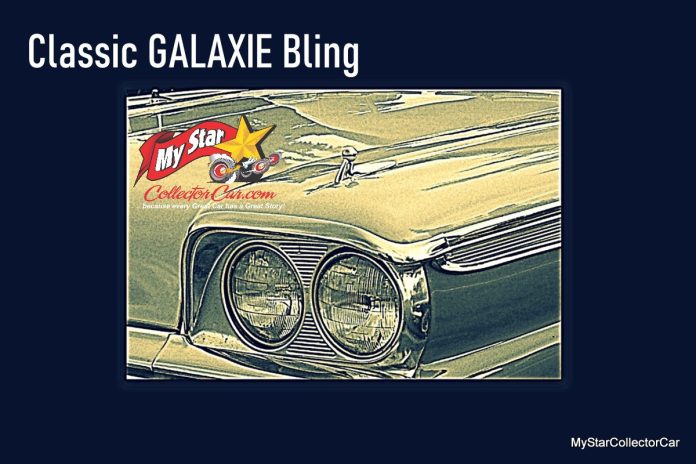 Ford was not the only company to add extra bling to the top of its car fenders during a bygone era, but the Blue Oval boys did it very well in our opinion here at MyStarCollectorCar.

As a result, MyStarCollectorCar decided to list five of our favorite front fender bling Ford models from this timeframe. Chrome was a big-ticket item on domestic cars during the mid to late 1950s, so it was not a huge reach for the Ford crew to add shiny stuff to the top of fenders where the chrome would most assuredly be seen by potential customer John Q Public.

One of the most creative examples of fender bling was given to the 1955-56 Ford Crown Victoria models because the cars’ side chrome swept up the side of the front fender and move forward on the top of the fender.

The car’s designers were able to take advantage of the Crown Vicky’s rounded front fenders and subtly extended the side chrome onto the top of the fenders. It was a subtle style idea that worked in magnificent fashion on the high end 1955-56 Fords.

MyStarCollectorCar’s second fender bling entry is the 1958 Ford Fairlane 500. Ford upped their game to an even higher level in 1958 when their Fairlane 500 models were equipped with circular gunsight ornaments that were positioned at the front of the car’s fenders on small strips of chrome.

The ’58 Ford’s side chrome continued on to the front of the car’s fender but did not climb the side of the car to the top of the fender like the ’55 and ’56 Ford high-end models.

The third addition to our Ford fender bling list is the 1959 Ford models, including the new Galaxie models. The Blue Oval gang put the competition directly in the crosshairs of their fender emblems in 1959. The ’59 Ford’s fender emblems were similar to the 1958 Ford’s but the ‘59 gunsight look was even more pronounced than the ’58 style.

Additionally, the 1959 Ford emblem did not have an extended chrome strip behind it, so the gunsight emblems were the center of attention on the car’s front fenders.

The fourth member of our esteemed Ford fender ornament list is the 1960 Galaxie 500, a then-radically new styled car that represented Ford’s vision for the 1960s. The ’60 Ford’s bold new body design still had front fender emblems, but they were reunited with the side chrome on the car that ran along the top of the narrower fenders on the 1960 Ford.

It was a new look that really worked in our opinion here at MyStarCollectorCar and helped give the underappreciated 1960 Ford a legendary style.

The fifth and final addition to our Ford family of fine fender emblems is the 1964 Galaxie 500, a car that also marked the end of an era for Ford Galaxies with the famous bling feature. The ’64 Galaxie’s front fender emblem was a small fin that emphasized speed and gave the car a sleeker look to accentuate its ability to hit high speeds with a big block option.

It was a look that really worked for us here at MyStarCollectorCar, but the radically new style of the 1965 Ford Galaxie did not include a front fender emblem, so the 1964 Ford Galaxie drove into the sunset with the last emblems on its front fenders.

MSCC JUNE 1 STARS OF THE WEEK: A T-BUCKET…BECAUSE THE PAST...