Only a car guy or masochist will try to sell his wife on a major old car restoration.

Don’t get me wrong, there are a lot of women who are car guys.

But there are many more who view cars as a part of a simple plan to get from point A to point B for basic transportation purposes. They do not feel the love when it comes to sheet metal, four wheels and a power train.

So it may come as a big surprise when a woman discovers that her husband has an unnatural affection for old cars. But it definitely will come as a painful shock when he shows up with a restoration project that will require a boatload of cash to bring it back from the dead.

Suddenly a non-car person is faced with some very bad news.

Her idiotic husband just paid top dollar for an old wreck that is currently in the VIP section of the garage where it is leaking fluid all over the floor.

The car is rusty, old and fresh out of good reasons why it belongs in anything outside of a crusher, in the view of a sane person.

Things probably get a little worse when her husband explains why he spent so much money on a piece of junk. Babble-speak about matching numbers, optioned out, and limited edition survivor will probably not sell her on anything other than an insanity gene in her husband’s DNA.

Then he will have to sell her on the time and money investment in an old car. There is nothing cheap about a good restoration, even if the guy takes on the project himself. Work on the car means no work on the house or yard, or any other domestic responsibility that will trump an old car every time in a (non-car person) wife’s eyes. 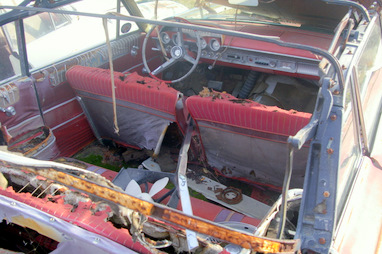 We live in houses and use them everyday for very practical reasons such as shelter and survival. We can get by without a car. We can really get by without a collector car that can only be used for a handful of days a year- and only in good weather. The rest of the time it will occupy prime space in a garage. This might be a very tough sell, even for Matlock.

The best line of defense is the value of an old car after a proper restoration. A husband under heavy fire will have to crack out some serious numbers about the value of his car after the dust settles on the restoration completion. Let her watch Barrett-Jackson and see what drunk guys with major bank accounts can do for the value of a car.

That may be the best news for an angry car wife: The actual value of the car after a potential sudden divorce or death in the family. Then a potential recent divorcee or widow will find out whether her husband really made a good investment.

A car guy has got to really love cars to face this kind of music.

DENNIS:The women in my family were delighted at the fact that I found an old Model T Ford to play with. I’ve had fast cars and fast Harley Davidsons my entire life. In 1988 I had a motorcycle accident that almost cost me my life, I’m still screwed together from that wreck till this day. It did however cost the life the woman I was about to marry. I sold my last Harley in 97 when I moved from Calif. to Fla. and my mother knew it was only a matter of time before I had another one. She was very positive about the fact that for the first time I’d purchased something that would only go about 45 mph on a good day. In fact, it’s parked in her otherwise empty garage because she’s 89 and no longer drives or owns a car. The woman in my life humors me. We have 2 televisions, so when the Barrett-Jackson Auctions come on, she just moves to the bedroom TV so she doesn’t have to listen to me say “I had one of those”, over and over again.

We don’t talk about “money” when it comes to my car. A 1927 Ford Tudor Sedan cost $450 new, I’ve got over $14,000 involved in mine.”
BRIAN:”:my wife laughed at this one……God im glad i found a good one!!!”
RICK:”Been married to my wife for over 24 yrs, She dislikes old cars, I have 4 now and had several others, I guess she must love me enough to put up with my obsession! I would let the cars go if I was losing her.”
SPONSORS