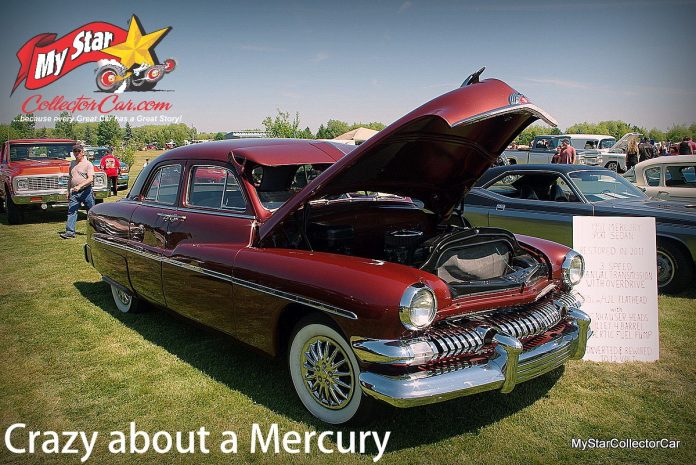 One of the most iconic rides in the car guy universe is the lead sled, a customized and motorized marvel that is largely associated with the 1949-51 Mercury.

Detroit’s Big Three car builders became an essential part of the war effort during WWII because they transitioned to military manufacturing and brought car-building to a standstill for several years. The pent-up demand for new cars in 1946 did not give domestic car manufacturers any lead time to design new car styles, so Detroit built new cars with old styles.

Eventually the Big Three were able to bank enough years to create new car designs that debuted in time for the 1949 model year, including the new look Mercury. The 1949 Mercury Eight was arguably the most advanced new car in terms of overall style.

The ’49 Merc was lower, wider and sleeker than its 1948 predecessor. It was a car built for a new post-war era that was also the early days of the jet age in North America, so the new streamlined design found on the 1949 Mercury was ideal for a new post war style.

The main goal at Mercury was a radically new body design that looked fast at a standstill and their ’49 Merc was a home run with its new look. Bear in mind the concept of a new look was relative to the era, but a case could easily be made about the timeless style of the 1949-51 Mercury models.

The new look 1949 Mercury inspired George and Sam Barris to tweak the design with some custom body modifications, a decision initiated by Sam when he bought a then-new 1949 Mercury and worked lead body filler magic on it.

The Barris brothers saw enormous potential in the new-look ‘49 Mercury and ran with it but, just for the sake of argument, MyStarCollectorCar would like to take a Billy Joel “Just The Way You Are” approach to the famous upscale Ford product.

Billy Joel pleaded “Don’t go changing” in his famous song and we believe a strong case for a stock 1949 Mercury could also be made in 2022.

Our first point is the scarcity of stock 1949-51 Mercurys in 2022. These cars have not left a factory for 73 years, an enormous amount of time for sheet metal to duke it out (and lose a fight) with rust and horrible driving.

MyStarCollectorCar’s third point for stock 1949 Mercury models is the wholesale destruction of automotive history whenever one of these cars get chopped, channeled, and slammed, while shoving a rival’s engine (GM) under its louvered hood. The car’s originality is destroyed at the very moment the Sawzall makes an appearance during the build process.

Our fourth point is somewhat subjective, but we believe the 1949-51 Merc was already ahead of its time when these famous cars were brand-new and wore their then-futuristic design very well, given the time frame.

Our fifth and final point is also subjective because MyStarCollectorCar believes the 1949-51 was one of the coolest cars ever built in North America. Even before the Barris brothers made it cooler.