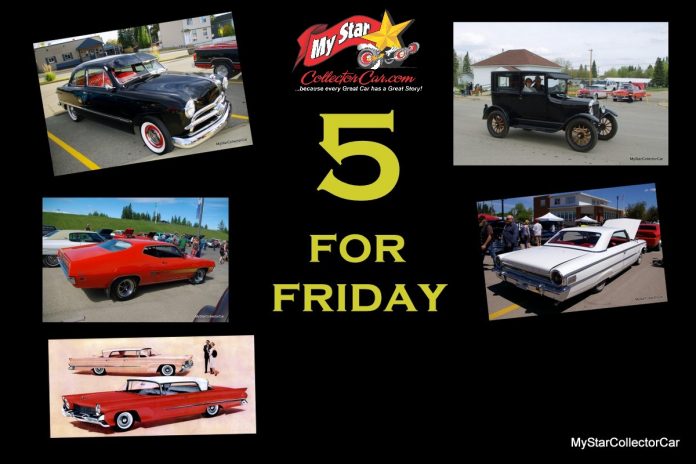 Ford Motor Company has enjoyed a long run as one of the big dogs on the block for domestic car production and MyStarCollectorCar is confident that trend will continue many years into the future.

However, we look in the rear-view mirror to get our automotive stories because MyStarCollectorCar is proud to live in the past when it comes to vehicles.

Our first pick is an obvious one: the Model T. It was a cheap, affordable internal combustion vehicle that appealed to buyers who hated horses and loved progress. Henry Ford was famous for his mass production factories that churned out millions of Model Ts and reduced their sticker price through a large sales volume.

Model Ts are still not easy vehicles to drive, but they were an instant hit with the buying public because they were affordable and opened up a brand-new world for their enthusiastic customers.

Our second pick for the Fabulous Ford team is the 1949 Ford, nicknamed the “Shoebox Ford” in car guy circles. The ’49 Ford was the Blue Oval Boys’ first brand-new design in post-war production and it took the world by storm with its stylish combination of curves and angles that resulted in a stunning overall look.

The ’49 Ford looked tough and cool right from the factory-and it became an instant legend in car guy world.

Our third Fabulous Ford pick is the 1958 Lincoln Continental. With all due respect to world-class custom car builder Dave Kindig, the ’58 Lincoln was already a wild custom the day the first one left the Ford factory.

1958 was a year when many domestic cars added two extra headlights into the mix, but the Lincoln Continental took the concept to a radically new level at Ford because the four headlights were vertical and stacked with the lower lights positioned at an inward angle.

The rear deck of the ’58 Lincoln had an intentional out-of-this-world quality to it, specifically because of the early stages of the Space Race between the Soviets and the Americans at the time. The ’58 Lincoln’s back end was combination of rocket-styled taillights and stabilizer fins that made the car look ready for takeoff.

The 1958 Lincoln Continental was a crazy winged beast of a car and embodied everything that was cool about the Elvis era, thus it richly deserved to be on our MyStarCollectorCar list.

The fourth addition to our Fabulous Ford list is the 1963 Ford Galaxie 500 two-door hardtop. This car looked fast at a standstill because of its sleek design, a look that moved Ford away from the clutches of the early 1960s and late 1950s.

The biggest cool factor on the ’63 Galaxie 500 two-door hardtop was its extended C-pillar design that joined the roof with the rear deck. These cars were large-and-in-charge, with roughly equal lengths on their front and rear regions, so the long fastback-like rear pillars did not look out of place on them. Quite the contrary in our opinion here at MyStarCollectorCar because they looked great on these stylish Fords.

The fifth and final addition to our list is the 1970 Ford Torino fastback. Much of the love for Ford’s fastbacks from this era is given to their Mustangs, but we at MyStarCollectorCar believe the overall style of the Torino fastbacks was second to none, particularly if the cars were equipped with hideaway headlights.

The 1970 Torino fastback looked ready to mix it up with anybody on the street, particularly when it left the factory with a beastly big block under its hood. They were cars that walked the walk-any time and any place-so they are a welcome addition to our Five Fabulous Fords list.

Five more to be added at a later date.