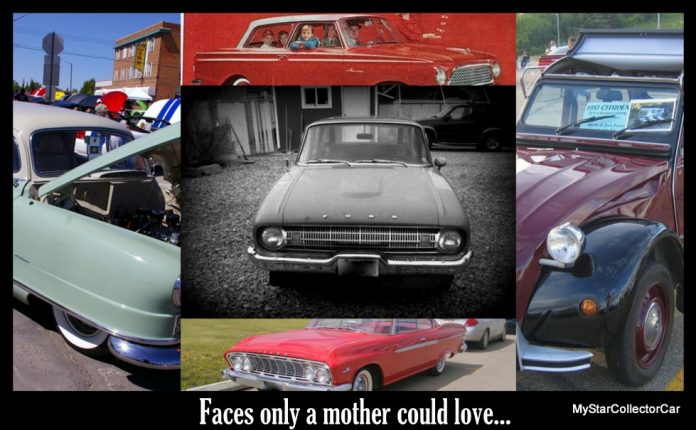 The Ford Edsel has long been considered one of the worst-looking cars ever built during the long history of the automobile.

Taking a verbal pot shot at an Edsel is akin to shooting pike in a barrel, but the massive amount of scorn heaped upon the iconic mistake on four wheels may not even be directed at the right car.

There were plenty of ugly cars built over the years and MyStarCollectorCar has both the guts and insight to shed some light on the homeliest cars that sauntered down an assembly line before they ambushed their potential buyers on a dealership lot. We assume the salesmen brought their A game to close a deal and were able to apply plenty of lipsticks to these pigs.

On a side note, we at MyStarCollectorCar do not wish to offend the current owners of our picks for the wallflower cars. On the contrary, we would like to salute the 21st century owners because they are outliers in a world of cookie cutter cars and chose to own vehicles that have never been accused of being pretty by sober or sane people.

The beauty of an ugly retro car can be found in the fact that few people own them in 2019 because so many of these vehicles had non-Walt Disney endings. Instead they had a grim date with a crusher about seven minutes after the first owner made his final payment on these ugly ducklings with an internal combustion engine.

The net result in 2019 is an aging rock star of a car that is now the metal embodiment of Keith Richards since neither car nor human being were particularly attractive at any point in their long pasts. However, both are chick magnets in the 21st century.

The first car on our list is the Nash from the early 1950s. These cars were built with one main design direction: take a refrigerator, add four wheels, two headlights and one of the homeliest front ends ever thrown onto a car. Kelvinator the fridge maker was a major partner with Nash the car builder during the early 1950s. The Nash proved the kitchen appliance manufacturer (Kelvinator) was the alpha male in their business relationship with the car builder (Nash).

The second car on our list is the 1961-63 Rambler American. These cars shared their DNA with the Nash because American Motors was the net result of a merger between Nash-Kelvinator Corporation and Hudson Motor Car Company on May 1, 1954.

The front end of a 1961-63 early Rambler American looked like an angry and more modern version of the early 1950s Nash, while the back end of the car looked like the company ran out of design money and ran with a bland uninspired look. There was precious little reason for the AMC people to break out the champagne when it came to the Rambler American-unless they were drinking to forget.

The third car on the MyStarCollectorCar hit parade is the 1948-1990 Citroen 2CV. These French cars did not cross the big pond in great numbers, presumably because the transport ships were torpedoed by car guys before the Citroens hit North America where they immediately caused major traffic jams because of their anemic little two-cylinder engines’ lack of horsepower.

The only thing that made their owners forget about the Citroen’s pathetic power was their incredibly unattractive style. These cars looked like a mutated Volkswagen Beetle that had its body panels severely beaten with an ugly stick-but they offered two more doors than a VW.

The fourth homely car on the MyStarCollectorCar list is the first-generation Ford Falcon that debuted in time for the 1960 model year. The Falcon was Ford’s initial entry into the compact car market and it caught a wave with its dedication to practicality and economy.

There was no provision for beauty when it came to the first-gen Ford Falcon (Frontenac in Canada) because all Ford wanted was a faster version of a VW Beetle and a working heating system from the compact Ford’s water-cooled engine. The result was a car devoid of style and good looks that could blow on by both the VW Beetle and gas pumps in 1960.

The first-generation Ford Falcon was purpose-driven to win Miss Congeniality in automotive circles. But it was never destined to become Miss Universe at the time.

The fifth and final addition to our ugly car list is the 1961 Dodge. The ’61 Dodge looked like an automotive version of the insect man from the science fiction horror film ‘The Fly’ because it was a horrible result of late 1950s Mopar style mashed into a hasty union with 1960s automotive style.

They were called “plucked chickens” because Chrysler amputated the fins off many of their 1961 models and hoped people would not notice the carnage. Soon-to-be-fired Mopar fin car designer Virgil Exner appeared to get the last laugh with the 1961 Dodge and these cars likely produced jaw-dropping moments when the public first saw them. But not a good jaw-dropping moment like a Marilyn Munroe sighting-more like a 1962 Cuban Missile crisis bad jaw-dropping moment.

As mentioned, the cars listed above may not have won many beauty pageants when they appeared as new cars on the lot, but they have become more beautiful over the years because so few of them survived the ensuing decades.

Nevertheless, some might still call their premature deaths a mercy killing.