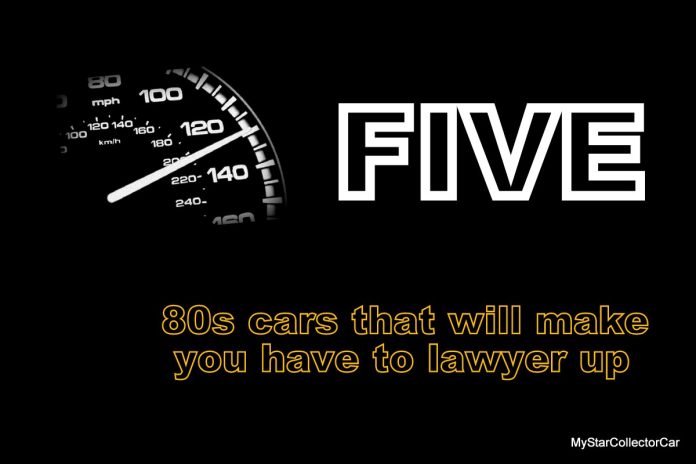 The 1980s were a time when cars came to life after the regulation-choked 1970s ended–with presumably less smog.

The 1986 Mustang SVO was a muscle car disguised as a 4-cylinder econo-box because there was a turbocharger under the hood.

This 2.3 four-banger had 200 horsepower—enough to power this light little Fox-body to 134 miles per hour. That top speed number is well within the specs required to call your lawyer.

The Mustang had a cousin in the top speed stable in the form of the 1987 Thunderbird Turbo Coupe. This ‘bird also had a turbocharged 16-valve, 4-cylinder—it was truly a mini-beast with 190 horsepower and 240 lb-feet of torque.

The 1987 T-bird Turbo Coupe could hit 138 miles per hour, so if you pushed it to its limit back in ’87, you’d better have your legal counsel on speed dial because you’re going to need some help.

Chrysler was on the middle of a transition period in 1987. The Hemicudas were gone and replaced with fuel efficient four and six-cylinder smaller cars. That’s what Chrysler had to work with, so they headed into a performance program designed to keep up with the Mustangs and Corvettes of the era.

Their performance program was enhanced when Carroll Shelby took some of their economy cars and turned them into rockets. The 1987 Daytona Shelby Z was one of his creations. There was a 2.2 liter, four- cylinder that Shelby breathed life into with a turbocharger, so it gave the 2800 lb. car 174 ponies to haul it down the road.

Haul it down the road it did–because the 1987 Daytona Shelby Z could hit 140 miles per hour—well within ‘I need a lawyer’ territory.

Camaros were reasonably light cars, so the small block pushed the IROC-Z to 130 miles per hour. That was fast enough to get you passage into Can-I-Call-My-Lawyer Land. These IROC Camaros are gaining interest in 2022, because if you keep them stock, you still have decent performance.

The 1989 ZR-1 Corvette really told a story about how things changed over that decade. These Vettes ran the trusty 350 small block, but GM really brought its game to get this car up to high performance specs.

It was called the LT-5 but this 32-valve Chevy small block earned the title ‘King of the Hill’ back in ’89. This was a DOHC, 32-valve monster and it pumped out 380 horsepower that pushed these cars to nearly 180 miles per hour—that’s way past ‘I need a lawyer’ time—‘it’s bring bail’ time.