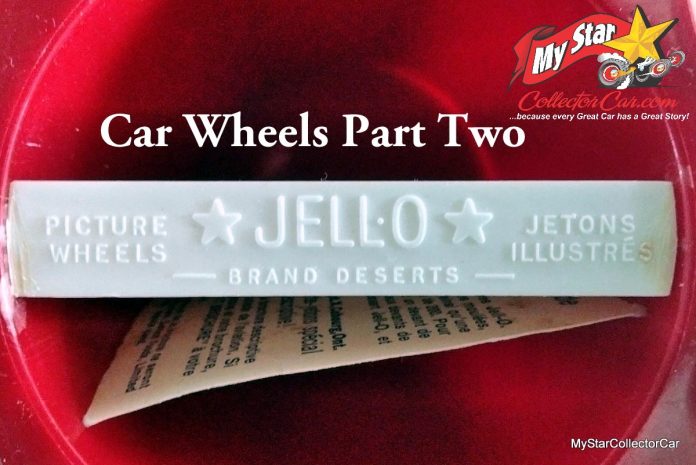 MyStarCollectorCar has covered the overall history of the Jell-O Car Wheels in earlier articles.

It did not get any better for a car kid with the Car Wheels promotion because it combined cars with one of the greatest desserts available to kids at the time. We at MyStarCollectorCar were part of the car kid movement during the early 1960s and had just learned how to read, so we benefited from the little booklet that gave a brief description for every one of the 200 vehicles in the collection.

Our first article was a personal description of the impact that Car Wheels had on young car guy lives, while the second article covered the pioneer era for cars. Surprisingly, self-propelled vehicles appeared in the late 1700s and continued to evolve throughout the ensuing decades, a fact that inspired the Jell-O people to divide their car history into chronological segments.

The Jell-O Car Wheels promotion ended their first era in 1899, so MyStarCollectorCar began Jell-0’s second era at the dawn of the 20th century with the first Oldsmobile, a car brand legacy that continued into the 21st century when Olds was banished to the island of the misfit car brands.

The Jell-O booklet listed the first Oldsmobile as a 1900 model, but our research indicates it was introduced as a 1901 model. Hair-splitting aside, the first Olds was a trailblazer because it was an affordable form of transportation at 650 bucks and could hit an astounding 20 mph on the road.

The first Oldsmobile became known as the Curved-Dash Olds and set the very young automobile industry on its ear in the early 1900s.

The 1903 Caddy begat a luxury car name that continues until this very day. Unsurprisingly, an 1903 Cadillac cost more than most cars at the time and tipped the price scales at roughly 750 dollars for a barebones model, but the car was clearly a notch above the rest in overall build quality-even in garden variety form.

Studebaker was a famous name in carriages that used actual horses before the company jumped into the horseless variety, a transition that included an electric motor-powered vehicle that was appropriately named the 1907 Studebaker Electric.

The Studebaker Electric used three batteries to power its motor about 35 miles before it needed a recharge, and apparently it was embraced by women at the time because it did not have exhaust fumes. The Jell-O information was too many years ago to conclude whether early electric Studebakers inspired our current green movement that is specifically designed to kill the internal combustion car, even without a realistic plan for long distance range electric cars.

No list from the early 1900s would be complete without the Model T, including Jell-O’s Car Wheels pudding promotion, so we included their T car wheel in our list. The Model T brought the automobile to the masses and helped drive the horse out of business as an important component of a transportation vehicle.

The Model T’s affordability was built upon the lower cost inherent in mass production and opened a brand-new world with bigger horizons because T owners (formerly horse-and-buggy owners) could now travel further and faster in these durable cars.