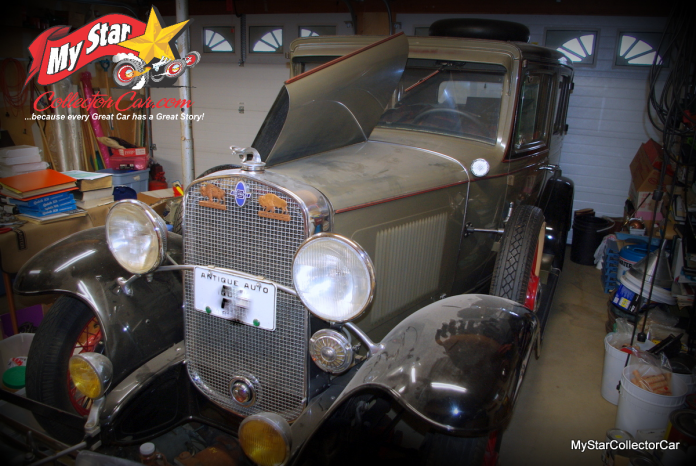 Ted Weale is the current owner of a 1931 Chevy built in Regina, Saskatchewan Canada during a tumultuous period in the western Canadian GM factory’s history.

The Regina General Motors plant opened in 1928 and employed 850 people during its heyday. However, the 1929 Wall Street market crash had a disastrous effect on the economy and devastated the manufacturing industry (including the Regina GM plant) in short order.

The Regina plant was shut down by 1930–but reopened for a few months in 1931 during a more favorable economic climate. Ted’s 1931 Chevy was manufactured during this short window of production and purchased by its original owner that year.

Ted was a licensed auto mechanic, as well as an automotive teacher, when he first encountered the ’31 Chevy. Ted worked at a garage during the summer months when he was not teaching and had never owned a vintage vehicle up to that point.

The time was 1961 and Ted noticed an ad in the local newspaper that offered a 1931 Chevy for sale-with no phone and no photo during that simpler era. Instead, the ad had a street address, so Ted went over to see the car and recognized it from his garage since the Chevy’s owner brought it to Ted’s garage for regular maintenance.

The ’31 Chevy was in excellent shape, so Ted purchased the car from its original owner and has kept the car for the ensuing 60 years. Ted is a firm believer in originality and has made very few alterations to the car for that reason.

Ted also replaced the windshield with safety glass because he wanted better protection for passengers inside the vehicle.

Ted recalled numerous trips in his Chevy, including excursions to Montana, Creston, BC, Edmonton, Alberta, and Jasper, Alberta among other road adventures in it. The car performed flawlessly for Ted, a testament to the car’s quality and his ability to get the best out of the car.

It will come as no surprise the 29,000-mile Chevy still has its original powertrain. The engine is an early version of the famous Chevy straight OHV (overhead valve) six-cylinder engine coupled to a manual transmission. Ted’s mechanical side kicked in when he described the dripper oil feed system with babbitt bearings as reliable, whereas most car guys lean toward the oil pump system on newer Chevy six-bangers. Ted’s experience presented a convincing argument.

Ted believed in the original engine’s oil feed system enough to take the ’31 Chevy on those longer road trips at 55-60 mph (90 -100 km/h) during his early days of ownership. Ted is still open to the idea of occasional excursions in his first collector car, but he and his ’31 Chevy have earned the right to take things easier in 2021.

These days every journey is a trip down memory lane for Ted and his stylish 1931 Chevy.