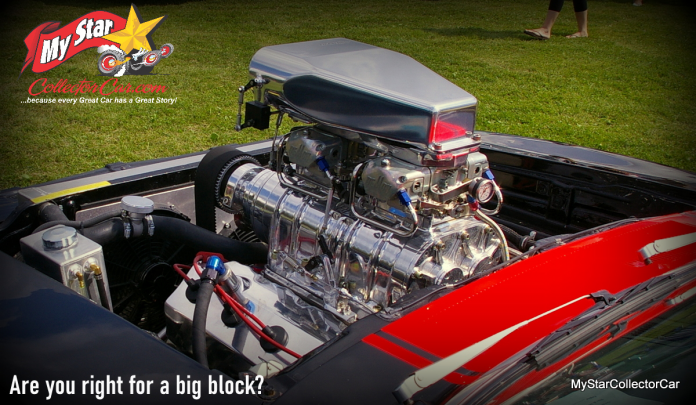 I was at a car show over ten years ago when a guy showed up driving a hairy-looking big block Willys and punched it with a crowd of people around it.

There were predictable results—he launched, went sideways, and somehow he missed mashing a gaggle of spectators.

The first thought. Do you know every cop on a first name basis? If you don’t you probably will every time you open the gates and unleash the fury of open headers. If the sound doesn’t get you some serious law enforcement attention, that 3-second/0-to 100 miles per hour statistic probably will.

You’re going to get more attention from other guys too, because a monster engine puts a target on your car the day you hit the street—just ask American Graffiti’s John Milner. Every traffic light will be a fistfight, so be prepared for a John Force showdown at every light.

Maybe you’re not cut out for constant street challenges, but if you keep turning them down, you have to ask yourself one question. Why did I build an 800-horsepower motor when I can only handle 300 horses? You’ve just hung a label on yourself—guy with too much engine for his testosterone levels.

Another issue is practicality. Modern technology means you can build a big block that puts out massive power, runs on pump gas and idles okay in traffic, but a lot of guys like the sound of a lumpy cam and the smell of race fuel.

I’ll be fair here. Those kind of guys typically know what they’re getting into when they drive a monster old-school build, plus they have the extra skill levels to drive these brutes, because they’ve done time at the track. They know what they’re driving and how to handle it, but I get concerned when a less-skilled guy buys a car like that on a whim because the next owner becomes the big block Willys driver I mentioned earlier.

Your insurance guy is going to take a deep interest in your car too. Roll cages and 10-second quarter-mile times means you’ll be talking to a very specific insurer, because a lot of conventional agents are going to treat your car like radioactive waste.

Then there’s the practical side. A car with a heavy-duty clutch, supercharger, ultra-high compression, and a gasser straight-axle front end that gets .05 miles per gallon on expensive fuel isn’t going to be your daily grocery-getter. Dropping off the kids at school will make them famous and infamous at the same time in today’s bubble-wrapped world–very few guys can sell a skeptical wife on those features.

Ask yourself this question. Are you a show or go guy because that monster under the hood is going to dictate terms.

If you’re a show guy with limited performance driving skills, the answer is obvious.