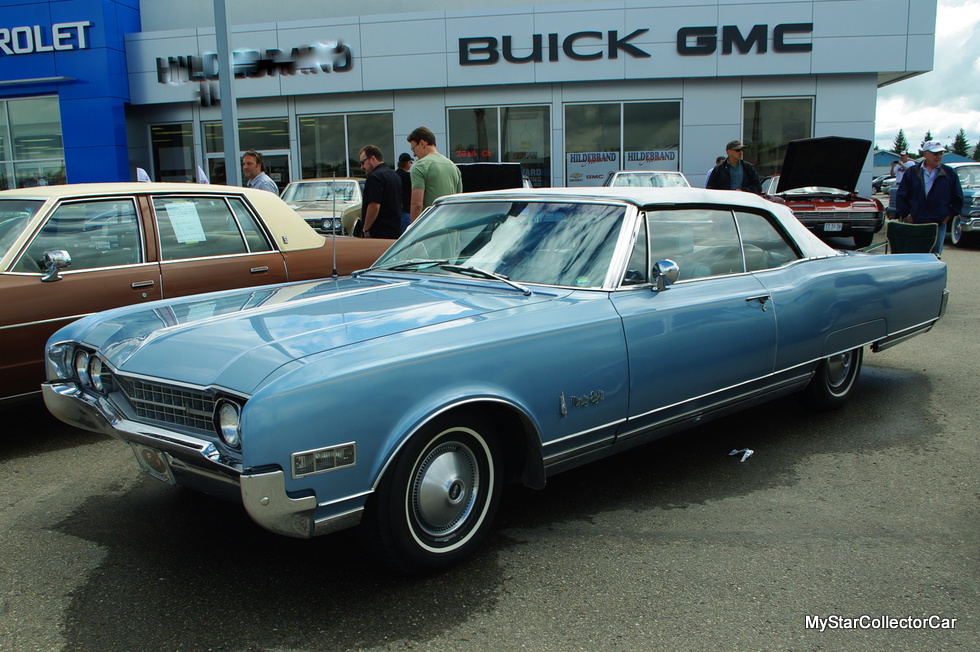 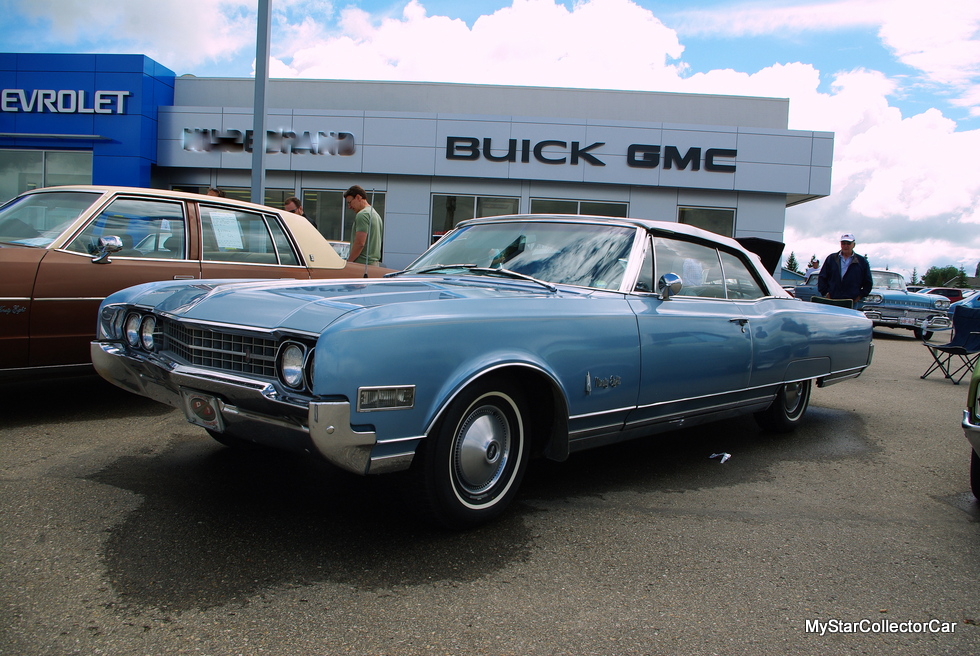 Most car guys are well aware of the struggle between the eternal enemies.

‘Regular MSCC readers know because the topic has been mentioned many times but for new readers the eternal enemies are wives and old cars. ‘

This Olds 98 convertible is the exact opposite of the eternal enemies theme. 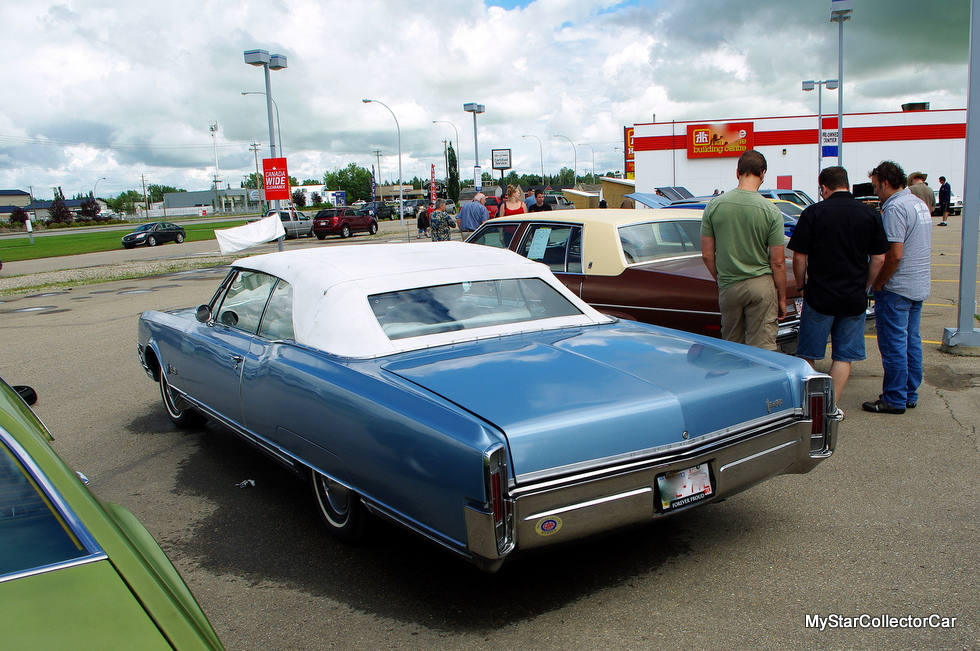 Lois Kostura wanted to get her husband Vic out of the kitchen because he was “always in the way and underfoot” so they went looking for an old car to get him out of the house and into the garage. She knew if Vic was out there working on an old car he wouldn’t be in her space. 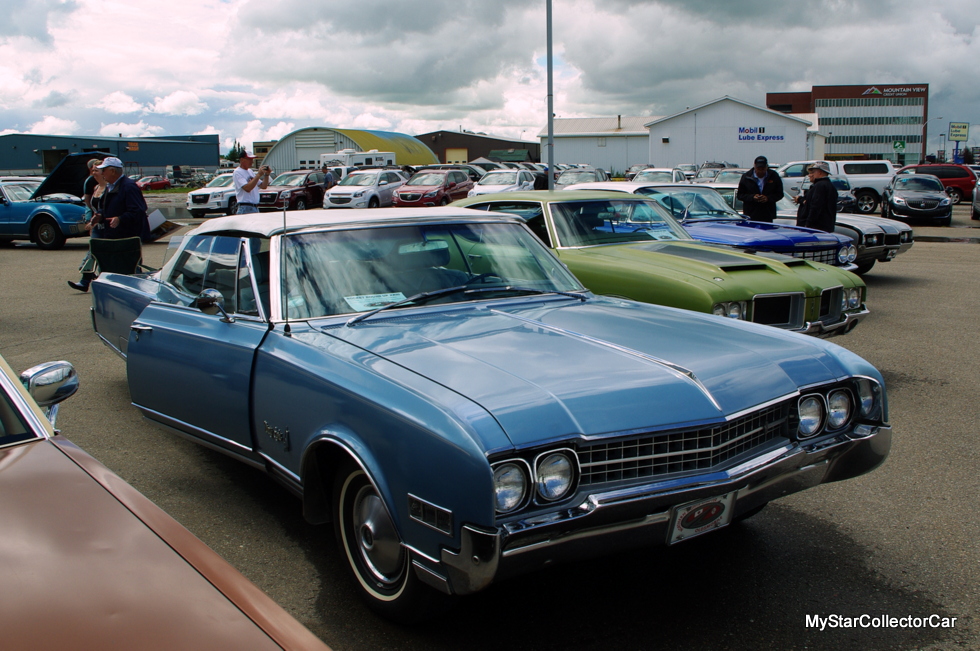 They went to an auction and spotted a really nice 1966 Oldsmobile 98 convertible but Vic had to take a bathroom break so he gave Lois some rudimentary auction lessons.

Lois admitted she, “had no idea what she was doing” but the hammer came down, she had her hand up and the Olds was “sold to the lady in the brown coat”. 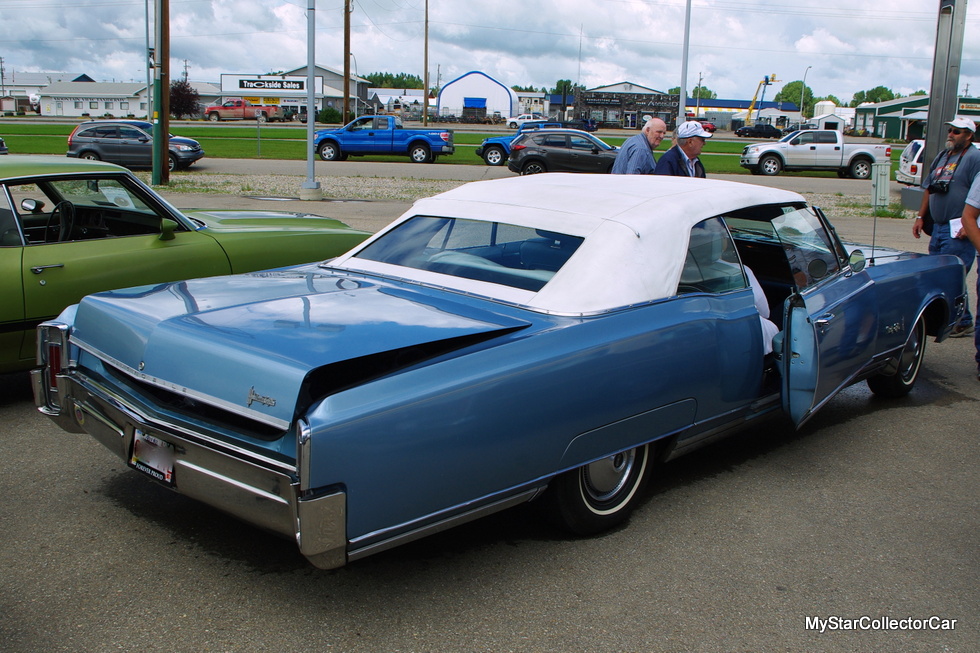 Vic came back to find out they were the proud owners of a large Olds 98 convertible.  Vic said the car “looked pretty much like it does now but it needed a lot of TLC” because “the paint was worn out and the paint was rotten”.

The Kosturas took a very practical approach to the Olds so they did things “as they were needed” and spared themselves the time and expense of a major restoration. Vic has redone the upholstery, engine, transmission and other things like rear end and some rust issues but only on an ‘as-needed’ basis. 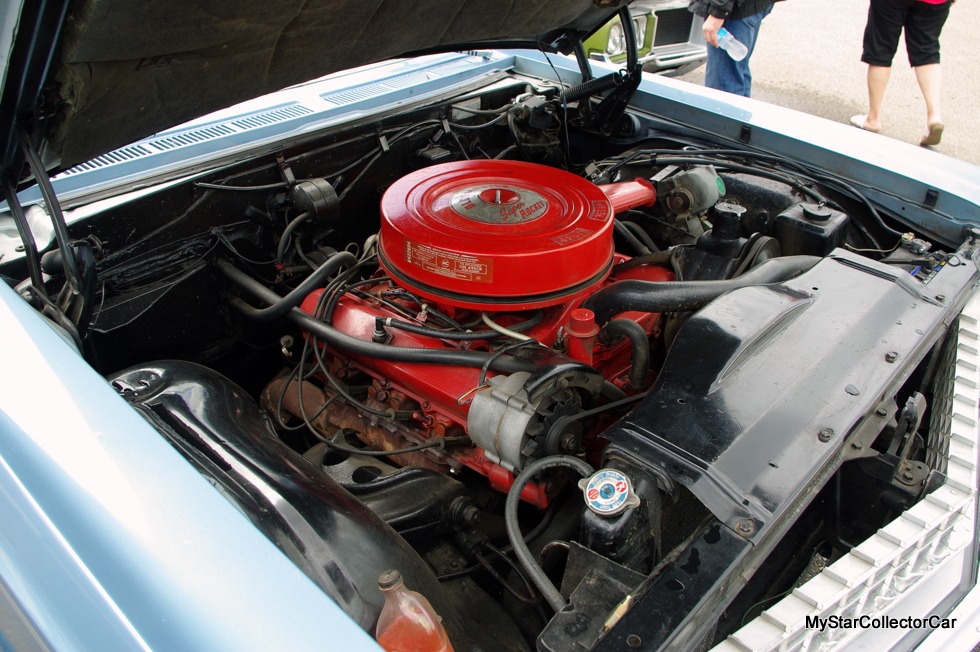 Vic picked up some period correct stuff over the years too like a 1962 vintage radar detector to add to the overall experience although he admits the detector wouldn’t work with today’s high-tech radar so he’d get nailed pretty fast. 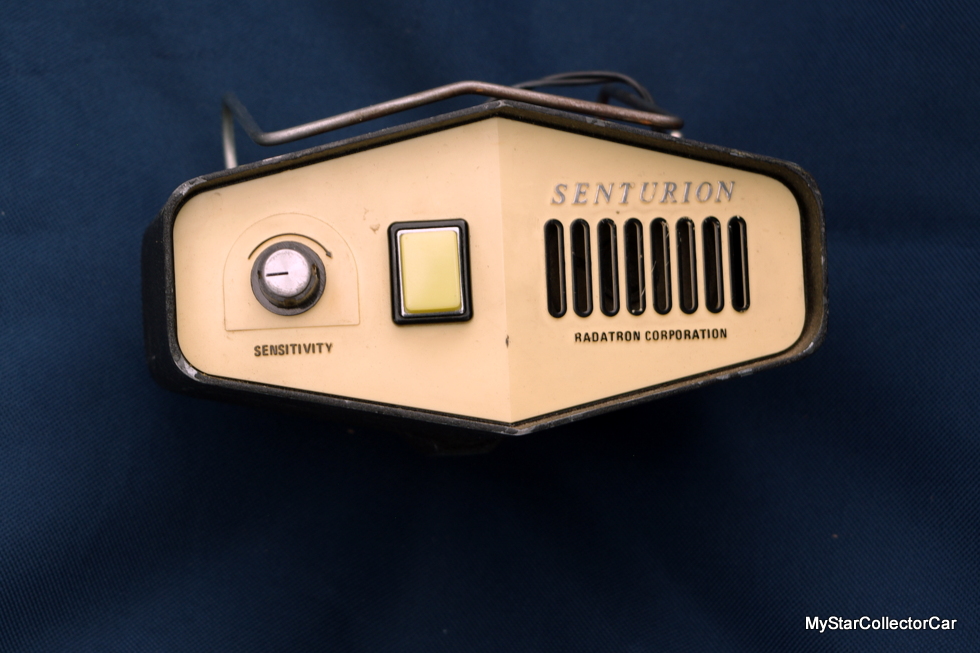 Vic and Lois have done many road trips in the Oldsmobile because they really enjoy the big brute and the camaraderie of the car show circuit. Vic admits it’s not inexpensive to run the 426 cubic inch 4-barrel (now set up for regular fuel) and he swears they “jack up the gas prices” every time he starts it  but it’s a small price to pay for a classic ride.

This is not a stoplight to stoplight car—Vic said “it’s a dog to start with but once it’s rolling it’s great and you feel twenty years younger with the top down”, so this monster runs with anything on the highway. He called it a “low flying aircraft—it floats, it’s so smooth and comfortable you don’t get a ride like this out of a new vehicle”. 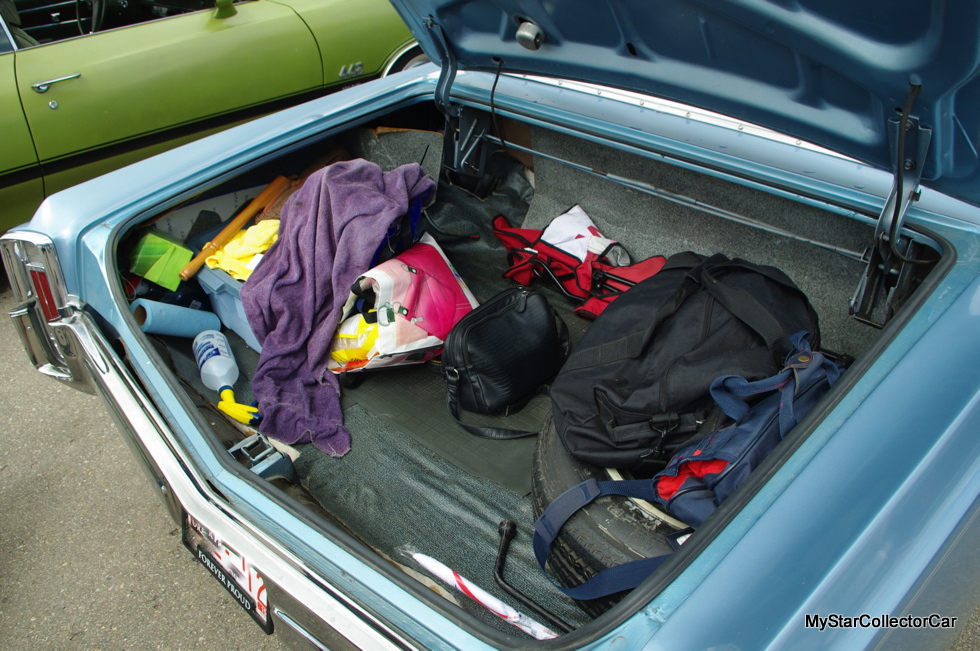 Vic made a few adjustments over the years because this car has been a parade float many times plus it’s hauled some famous people over the years including The Drifters. The Olds ran a little hot so Vic added a 5-blade fan and a 4-core radiator to handle the extra stress and this improved its low speed manner sin a big way.

The Kosturas have put a lot of miles on the Olds ’98 over the years but they’re spending a little less time with the big convertible. Vic explained how their “priorities changed” with the passage of time but they still like to haul their daughter, son in law and grandkids around in this classic. 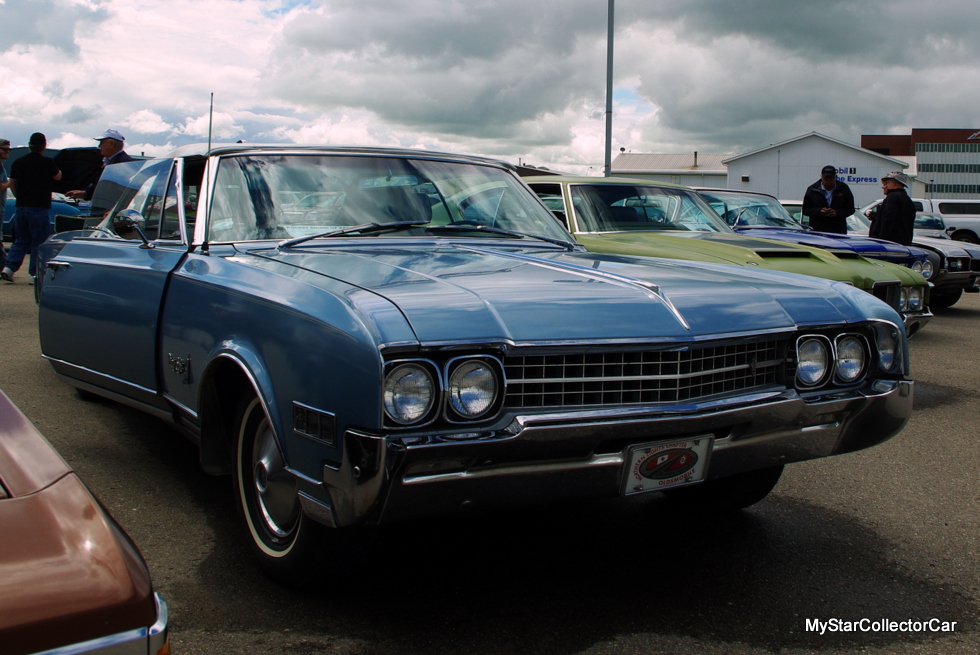 He said his son in law nearly froze to death in the back seat on a top down, early fall run during one of their excursions  but his 8-year-old granddaughter is the heir apparent to the big Olds. He said she’ll probably be driving it in about ten years and she loves it with the top down. 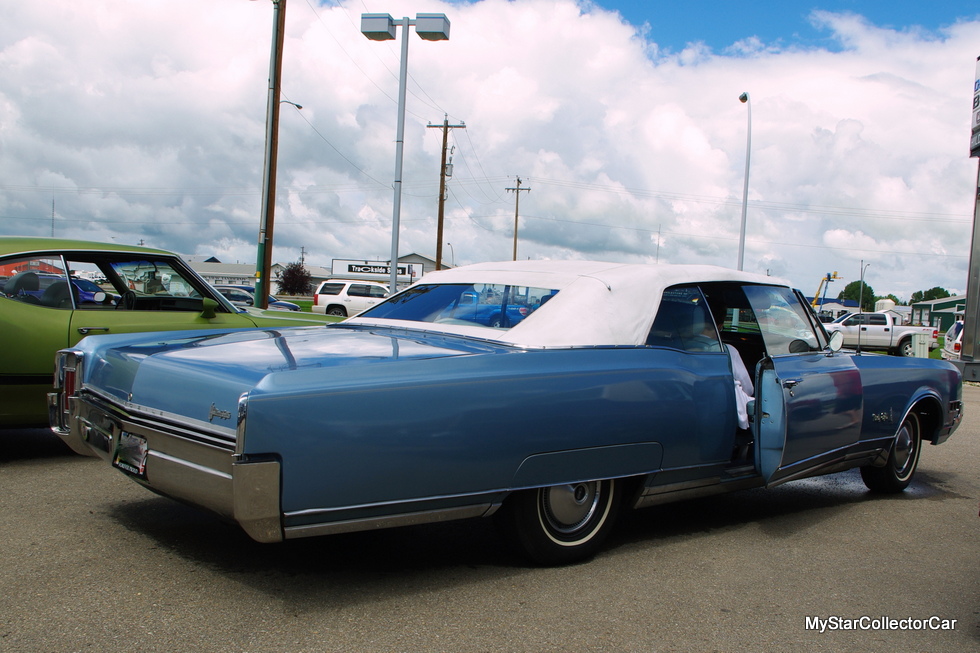 ‘There was definitely a game plan with this Olds 98 because it did get Vic out of the kitchen and into a lot of road adventures plus the torch will be passed to another generation.’