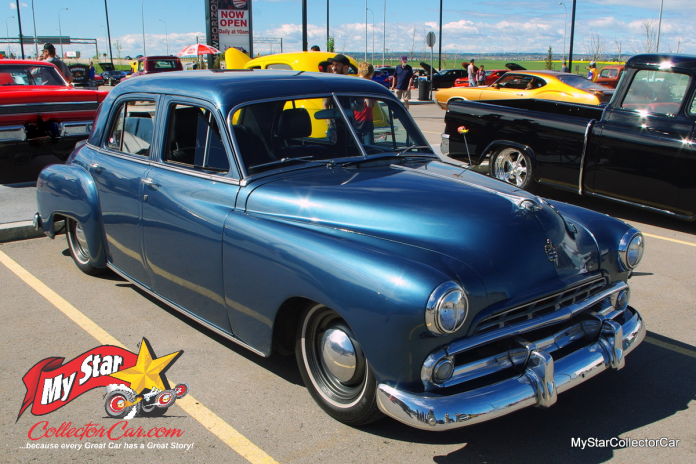 Ed Simon is a young car guy with an old school resto mod in the form of a 1952 Dodge Regent four-door sedan.

To be specific, the Regent models had a Dodge front clip, but they were pure Plymouth from the windshield to the rear bumper in their overall style.

There was nothing overly inspiring about an original 1952 Dodge Regent four-door sedan because the factory versions reeked of practicality since the cars were built for practical buyers in Canada.

However, the practical side of Ed’s ’52 Regent gets buried by its newly found cool factor. The original style of the Dodge remains intact, but the car has undergone some major changes over the years.

It now boasts a 302 Ford small block engine coupled to a 4-speed AOD (Automatic Overdrive) transmission. The Regent retains its original suspension, although Ed told MyStarCollectorCar the car has been lowered 5 inches from its factory height.

The Regent’s steering box was replaced with a 1992 Chevy Cavalier rack and pinion steering system with a nod toward a performance upgrade that gives the 68-year-old Dodge sedan much better handling on the road. The only complication left for Ed is a comfort issue because the car is a little stiff on the road, so he is weighing his options, including a potential air ride system for the Regent.

The Dodge Regent has undergone a serious interior upgrade, mainly with Japanese donor parts. For example, the seats were donated by a mid-2000 Mazda and the front seats have 3-point safety belts, while the console is pure Mitsubishi. The Regent also sports a custom steering column to add to its resto mod game plan.

The instrument panel in the car is factory original — with a high degree of functionality, including its electronically modified temperature gauge. The wipers were originally electric (a rare feature in 1953 which separated the Dodge from many other vacuum wiper cars during that era) and the current electric wiper system is period correct for the car.

The ’52 Regent still has its original hood emblem and badge because they represent everything that was cool about these automotive adornments from that bygone era. Ed applied some serious elbow grease to bring out the best in the Regent’s hood bling and both trim pieces have responded well to his efforts.

Ed has retained the Regent’s original 15-inch wheels and factory hubcaps for the car, but he may make some changes in the future.

The only significant alteration to the ‘52 Dodge’s overall appearance (other than its lower stance) is the rear spoiler on the car’s trunk. The custom add-on also contains a middle rear brake light from a Dodge Caliber where other drivers will see it in modern traffic.

It is clear Ed loves to spend time behind the wheel of his Dodge because he had already logged about 5000 km (3000 miles) by mid-summer 2020. He intends to enjoy the car as much as possible and work on some changes during his spare time in the winter.