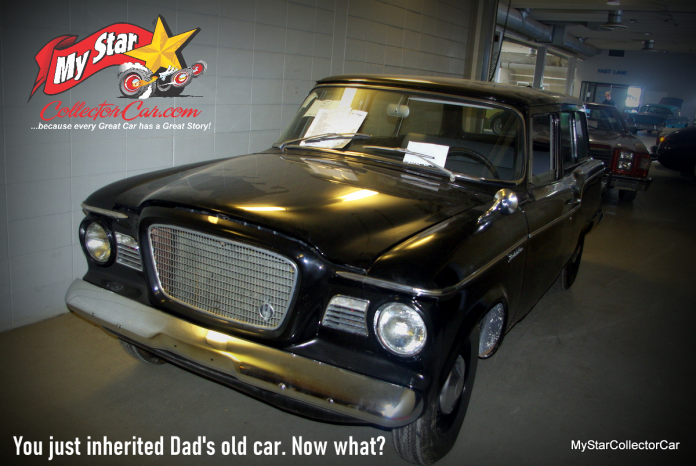 There’s a succession plan with every old car and in a perfect world it ends up in the hands of the next generation.

Old cars are like old dogs—they require more care and attention, their parts wear out, they aren’t as fast as they used to be, and they can leak all over the place. Classic iron is an instant commitment—just like an old dog—and not everyone is a dog guy.

The worst-case scenario is when the dead car guy is a distant relative of the recipient. In other words, your Great-Uncle Herman left you his beloved old truck, but you have a problem. You barely—or didn’t know Unky Herman so the only real connection is a sliver of DNA, but he still left you a vintage truck.

This kind of inheritance only ends one way—fire sale. You have no personal connection to Herman and an old truck makes no sense to you because you’re more of a Kia Stinger guy, so Uncle Herman’s truck is gone before the weekend.

Maybe the family connection is a little closer. A lot of car guys are leaving their classics to their grandkids, but what if the classic is his beloved four-door sedan?

Sure, it’s an incredibly well-maintained four-door sedan, but the chances are slim that a kid in a 2021 high school is going to see the cool factor in grandpa’s decades-old land yacht. Typically, this succession plan ends up with a brief period of mourning, followed by a quickie ad in the local buy and sell pages.  Grandpa shouldn’t have worried about routine oil changes because his mint old sedan is demolition derby bound.

The next scenario is much closer in the DNA world. This one is when dad leaves his classic to a son or daughter. In theory, this should have a Walt Disney ending, but in reality, this succession plan is going to hit an iceberg faster than the Titanic.

There are many reasons why this plan won’t work, but most of it revolves around how much blood the kid has in the game. If dad didn’t get him in the garage and teach him anything about how much work goes into a project, there’s a good chance the kid has no personal investment in the car.

The car represents a strong connection to the late father, but the day it takes up SUV space in the garage is the same day it becomes a family problem. That’s when the clock starts ticking and now the car is migrating from warm and fuzzy memory of dad to impractical. The next step is a collector car auction—or Jay Leno—if it’s extremely rare, Leno will probably sniff it out on his own.

The Restoration From Hell Part Five