Okay, I admit to a built-in bias – I am a huge mid to late 1950s-iron guy followed closely by my affection for early 50s American classics.

A Ford was a Ford, a Rambler was a Rambler, a Desoto was a Desoto.

These cars actually looked distinctive unlike today where the badge, if you can find it, is the only vague clue any manufacturer will give you. Companies like Hyundai and Honda distinguish their emblem by a slight variation in the angle of the letter.

Thanks guys.That really clears things up.

All of a sudden the Tupperware era of car manufacturing really makes sense. 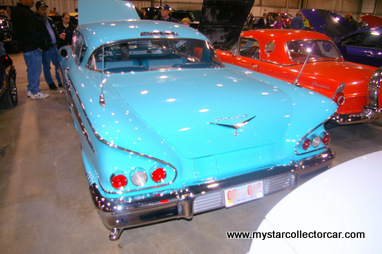 Can you imagine anybody mistaking a ’58 Ford for a ’59 Dodge Custom Royal? It wouldn’t happen because the Big 3 had artists,not number crunching soul-sucking drones designing cars.

Governments stayed out of the game too so you were allowed to drive a car behind a giant chrome gizzard- impaling steering wheel that didn’t fold up or explode a big puffy airbag in your face. All that does in a real serious impact is allow you to hang on long enough to give a paramedic a pulse. 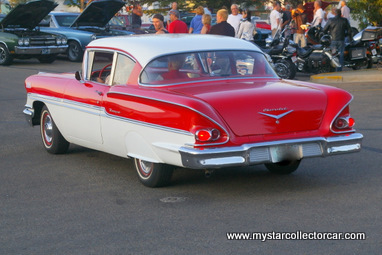 The 50s cars took you out so fast you didn’t need medical help.All you really needed was a non-sqeamish tow truck driver and a rubber bag.

Now we have the resto-mod guys. I saw a brutal unreported crime on The Learning Channel when they took a tired, but rare 1958 Chevy and turned it into a Franken-car for NASCAR driver Rusty Wallace.What arrogance to think that this was a better look than what GM did at the time. 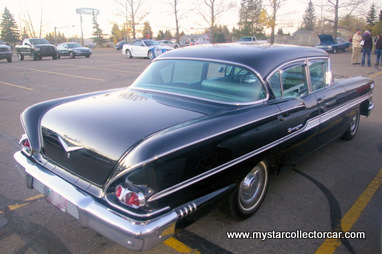 This was an easily restorable classic 50s car , complete with all the excess chrome that made them so distinctive and these jokers turned it into a freak. Sure every red-blooded car guy would kill for a full-race Sprint Cup motor in a hot rod project. But this was a ‘58 Chevy wagon-you might see one at every 10,000 car shows so why didn’t they just pick a tired ‘85 Caprice wagon?

This wasn’t a TV show, it was a massacre.

I’m all for retro-fitting things like disc brakes and fuel injection because it helps drivers cope with the reality of dangerously stupid driving in the 21st century. But these guys went way too far with the painted-on chrome look, mono-color front end ,ground-scraping stance and stupid-looking giant wheels with thin rubber tires. Would it kill them to save the actual chrome?

That was ridiculous and if these guys think that this was an improvement on the standard ’58 Chevy then maybe there are too many unmasked toxic paint fumes flying around that shop.

I know it’s their property and they can drive it off a cliff because it is theirs (blabbety blah blah) but with that freedom comes my freedom of speech  to tell them that this was a monstrous act on an innocent 50s era classic.

Save the classic 50s iron from the same hideous fate that the ’58 Chevy wagon and other 50s classics have endured .