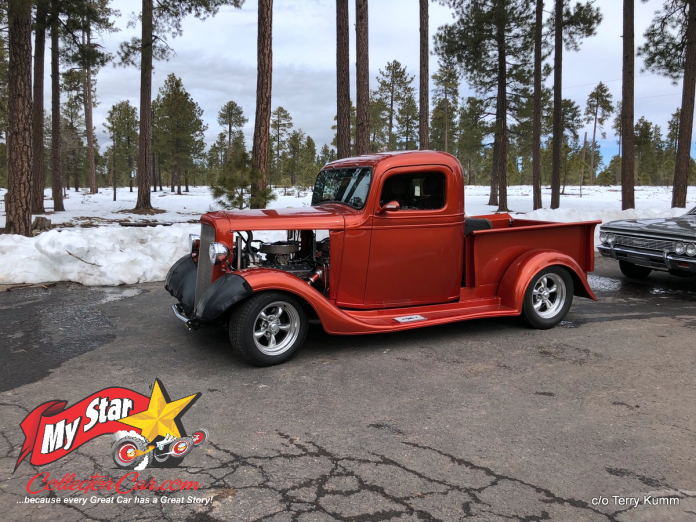 MyStarCollectorCar did an earlier feature on this very cool 1936 Chevy truck in the spring of 2013.

Terry wanted to ensure the ’36 Chevy was ready for final paint and decided to put it through real world use before he took that step. The 2013 article about the truck also showed why Terry and his wife Nancy are still happily married after many years together because Nancy has supported him throughout the entire build process.

In fact, she bought the truck for Terry as a Father’s Day gift back in the 1980s and let him loose on the transformation process.

The process was a lengthy one that took about 8 years, according to Terry. He was not yet retired from his job at a local petrochemical plant and had a limited amount of spare time to tackle the project.

Eventually, he was able to finish the first phase of the build and brought his ’36 Chevy truck back onto the road in 2013. The final phase of the project involved plenty of sanding and prep work before Terry got the final paint and finetuning done by Comfort Collision’s Trevor Comfort.

Terry is also a former journeyman in the auto body trade and was able to devote plenty of his post-retirement time to finishing the truck. However, he wanted Trevor to take care of the final finish on the Chevy because of Trevor’s reputation for excellent work.

Terry swapped out the truck’s original engine for a 350 Chevy small block upgrade that offered a major upgrade in performance. He supplemented the massive horsepower change with a strengthened cab that replaced its wooden components with metal ones.

The front end is now based upon the Mustang II system while the rear bed has been shortened to give the truck a more stylish overall appearance. Terry also fabricated hood cowls and door skins for the truck during the rebuild process.

He even added a modified floor to give the passengers more leg room during longer trips.

The concept of longer road trips was always in the game plan for the ’36 Chevy truck and was highlighted with Terry and Nancy’s 2019 tour through the Canadian Rockies en route to Vancouver Island for the Deuce Days car show, down into California via the Pacific Coast Highway, and then back to Canada via a two lane route that meandered through northwestern US and British Columbia along the way.

It was an interesting and trouble-free journey for the Kumms that encouraged them to tackle more trips in their Chevy truck.

They trailer the truck down to Arizona for their annual winter trip because there is no snow upon arrival-but plenty of it along the way from their western Canadian home. But make no mistake about it, Terry prefers to drive the ’36 Chevy to most destinations.

Terry noted the high number of shows that take place in Arizona during the winter months and attends as many as possible when he and Nancy are in the area.

Terry is also a member of the Mesa Vintage Cruisers car club and explained how most of its members are snowbirds from both sides of the 49th Parallel who love and own vintage rides. The group has an active agenda of weekly car events that involve cruising in their retro rides to local points of interest that are not always related to cars.

The road to the 1936 Chevy truck’s completion has been a long one for Terry and Nancy but the road in the truck itself has been one of the best journeys of their lives.