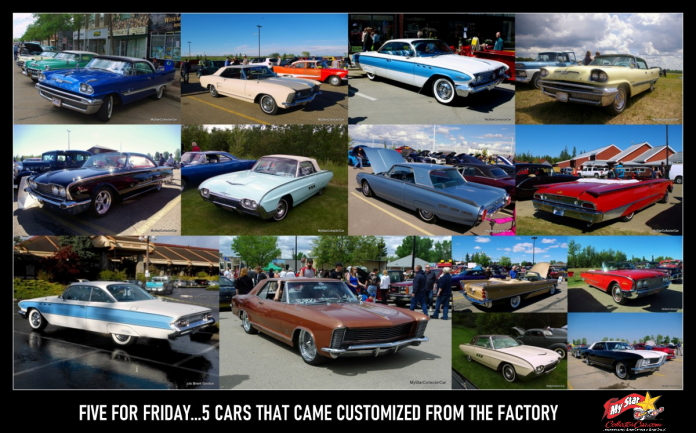 There are many car cosmetic surgeons in the hobby.

These talented cats can transform a style-challenged car into something well beyond the factory vision for it.

The projects can take a great deal of cash and effort to make the successful journey from stock to custom. The major exceptions are the vehicles that were built custom-cool right at the factory. MyStarCollectorCar picked five of our favorite cars from the past that did not need a Dave Kindig intervention to customize them since they were already cool right from the git-go.

The first car on our list is the 1961 Buick Invicta, an ultra-stylish car that has curvy body lines with remarkable rear quarters that ended in one of the most unique rear bumpers ever created by the General’s automotive design army.

The ’61 Invicta looked fast at a standstill because the aerodynamic front fenders imitated the sleek style of a jet and were a natural balance for the rear quarters. In addition, this car was not a mish-mosh of ideas clumsily cobbled together by incompetent designers. Everything looked like it belonged on this stylish Buick from a bygone era.

The second car on our cool factory custom list is the 1961-63 Thunderbird, better known as the “Bullet Bird” because of its unique design. The Bullet Bird marked the dawn of a new era for the T-Bird because it introduced a ground-breaking look which consisted of curvier body lines and a new aerodynamic style that completely separated the Bullet Bird from its 1960 Thunderbird (aptly nicknamed the Square Bird) predecessor.

The Bullet Bird was a car built to resemble a fast-moving projectile, right from its sleek front end to its large round taillights that looked like rocket boosters. A side view of the car revealed its sleek style in a big way to onlookers because it took its cues from a bullet design.

Ford already jumped into the cool factory custom car game a year earlier with MyStarCollectorCar’s third choice: the 1960 Galaxie. The ’60 Galaxie was a marvel of design that marked Ford’s celebrational intention to earmark the dawn of an exciting new decade with a cool new style.

The 1960 Ford still had tailfins, but they were more horizontal, sleeker and, most importantly, cooler than a 1959 Ford’s rear deck.  The rounder front end of the 1960 Ford was also a big departure from the ’59 version and readily lent itself to the overall design of the car.

Our fourth addition to the factory custom list is the 1963-65 Riviera. The Buick name has been associated with affordable luxury for most of its existence, but the ’63 Riviera added factory custom-cool into the mix.

The front end of the 1963 Riviera was a thing of beauty that needed no custom tinkering because of its stylish grille, but Buick made it even cooler by 1965 when they hid the Riv’s headlights behind the vertical grilles in front of the fenders.

The 1963-’65 Buick Riviera showcased the long hood and short deck design that would be a staple for many domestic two door hardtops over the ensuing decades. Many believe the first gen Riviera was the finest factory-built example of the famous long hood/short deck style ever created by General Motors.

The fifth and final addition to MyStarCollectorCar’s list is the 1957 De Soto. Most car guys are aware that Virgil Exner was the driving force behind Chryslers’ famous Forward Look (finned car) program during the 1950s and early 1960s.

The De Soto was an upscale member of the Mopar family and built a reputation as a stodgy model until Exner’s intervention in 1955. Exner took the De Soto into the stratosphere of design by 1957 and created his favorite fin car during that outrageous period in automotive history.

The car’s large tailfins were perfect and the ’57 De Soto’s body design was a huge asset for the car’s overall factory custom cool style. In our opinion, there has never been a need to tinker with the car’s design-then or now.

IN THE HEADLIGHTS-DEAD CELEBRITIES AND THE CARS THAT KILLED THEM