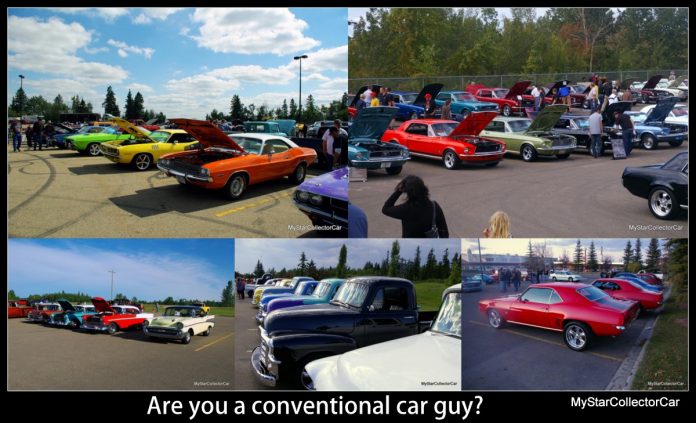 Few people will argue against the blanket statement that car guys are typically unconventional people.

Unless you’re talking about Royal Canadian Air Force jets, not many conventional people like to run outdated, low-tech vehicles from the past.

For example, when you pull into a show do you see twenty other clones of your car?

Is the aftermarket parts book for your car thicker than the New York City phonebook?

Do they make reproduction body shells for your car?

Is there a category at most shows for your specific car?

Are there hundreds of cars like yours at major auctions?

If you answer yes to even one of these questions, your car just told you you’re a conventional car guy.

The tri-five Chevys are prime conventional car guy purchases. They are an American icon so they have a huge cult following plus a less committed following from non-car people who recognize a ’57 Chevy as a vaguely familiar, cool old car.

There’s a mild exception to the rule because if you own a tri-five Chevy with four doors you are less conventional than your two-door brothers in the 5-6-7 world.

1st Gen Mustangs are another conventional car guy purchase. There may be more ’64-66 Mustangs on the road in 2020 than there were in 1968 when they were a used car – thanks to an incredible parts book, re-pop body shells and the eternal wave of enthusiasm for these pony car legends.

They’re cool cars but if you’re a Mustang guy, you’re probably a Coors Light guy – not a Guinness guy.

Late 40s to mid-50s Chevy trucks are another classic conventional thinker car guy vehicle. They made millions of them over the years and in 2020 you can build a ’49 Chevy pickup from a massive parts book or start with a new body shell – they’re just that popular.

These post-war Chevy trucks are similar to 1st Gen Mustangs because you may see more of them on the road in 2020 than you would have seen back in 1961.

The 1st Gen Camaro is the last example. If you own one, you’re probably more of a Van Halen guy than a Van Morrison guy. Camaros – especially ’69 Camaros – have more fans than the population of Sweden, Norway and Denmark combined – with room for Ireland.

This popularity has spawned an industry of aftermarket parts so the 1ST Gen Camaro will still be around in 2070 even if they’re solar-powered.

Fear not if your old classic is on this list of conventional thinkers – look at it this way…you’re still a million times more interesting than every Prius owner who ever lived.

DECEMBER 4 STAR OF THE WEEK: THE FUSELAGE ERA MOPAR B-BODIES...