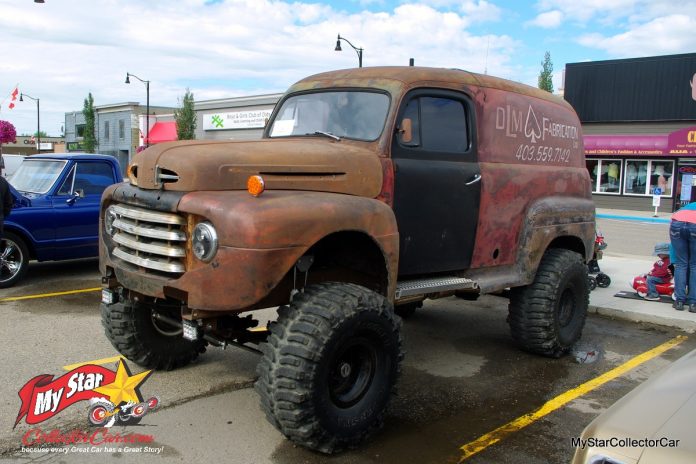 Just for the record, the headline reads correctly in this article because a Mercury truck was available in Canada.

The unusual Canuck truck was built for the smaller Canadian network of Ford or Mercury dealerships and answered the bell for when small town realities meant only one dealership for Blue Oval customers in the community.

A 1948 Mercury M-47 panel truck is a rare sight at any 21st century car show, but Dustin Morrow’s ’48 Merc is a one-of-a-kind beast of burden because three generations of his family were involved in its transformation into a road warrior.

The process began in earnest during the third week of May 2020 when Dustin tackled the project with his father Neil and son Lincoln, the exact moment the Mercury project became a multi-generational bonding process.

Dustin’s son Lincoln is only 5 years old, but he is already a dyed-in-the-wool car guy who loves monster trucks in a big way. In fact, Lincoln named the ’48 Mercury panel truck “Bone-buster” because of the heavy-duty chassis modifications done to the vehicle over a short period of time.

Dustin is a welder/fabricator and a dedicated car guy in his own right, largely because his father Neil influenced him over the years and steered him in the car guy direction.

The immediate goal for Dustin was to build something very unique with his son and father in a short period of time while using the resources available to him in his shop. The panel truck needed a serious upgrade in the chassis to handle the massive power upgrade, so Dustin created a beefy frame from some of the sturdier rails that were in the shop at the time.

Neil was able to provide the firepower in the form of a 390 Ford engine for the Merc truck. The famous Ford big block was hooked up to a Ford C6 transmission to handle the extra horses.

Lincoln invested sweat equity into the project and tackled jobs such as sanding the floor in the panel truck and assisting in the union of the engine to the tranny via the torque converter. In Dustin’s words, “The kid has put hours into the project and never complained”.

Dustin created a 200-liter (about 53 gallons) gas tank for the Mercury project panel truck because he wanted to extend its range and thought it would be a thirsty vehicle. So far, he has been pleasantly surprised with its mileage, although the bar was set pretty low in the fuel economy department, according to his father Neil.

Dustin said his custom panel truck is comfortable at about 90 km/h (about 55 mph) and definitely  earned its Bone-buster name with its stiff ride, but its extra height and ultra-coolness has made it a rock star during its public appearances.