On Monday October 31st the world hit 7 billion people, but it was short one extraordinary human being by the end of the day.

Aidan Fitzgerald passed away that day, and he left behind a big legacy in his short life of 20 years.

I met Aidan in the summer of 2010 because we had gotten word that he was a huge car guy.

The problem was Aidan had Duchennes muscular dystrophy and was confined to a life in a hospital.

I confess that I knew very little about the disease beyond its insidious ability to rob people of their mobility and eventually their lives. It was largely a Labor Day telethon concept that was the erstwhile cause of comedian Jerry Lewis. But I had never spent time with a person that had the disease until I met Aidan.

Aidan had reached a point where he required hospital care, but he was also nineteen at the time, and we can all recall that nineteen is when most of us are led by the restless spirit of our youth.

Aidan was no exception to this rule of young adulthood, but any outside adventures were incredibly difficult for him because of his care needs. The goal in early summer 2010 was to get Aidan to the weekly drop-in car show at the Parkland Mall. It seemed like a modest goal but hospital protocol and Aidan’s specific requirements made it a larger mountain to climb. 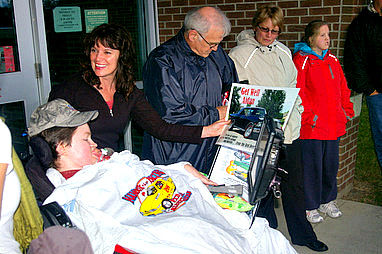 Eventually a compromise was reached and our hospital had its first car show. Aidan was able to cross the barrier into the outside world for the first time in a very long while and enjoy the sights and sounds of a car show in the hospital parking lot. It started in nasty weather for a car show, but the car guys arrived because they wanted Aidan to enjoy an actual car show. 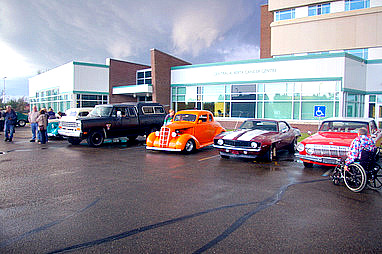 One has to remember that car guys are like mother bears with their cubs when it comes to their rides, so the idea of bad weather (and their vehicles exposure to same) is enough to make them scream in the night. However they wanted Aidan to be a part of the car culture, even if they had to subject their beloved vehicles to a little bad weather.

As it turned out the weather improved and Aidan got his first car show. The second car show for Aidan came a little later that summer and he was able to travel to the actual Parkland Mall show. The weather was cool and windy, but it didn’t matter to Aidan because he was outside of the hospital and able to enjoy some time in the world outside of his room-including a mall visit. 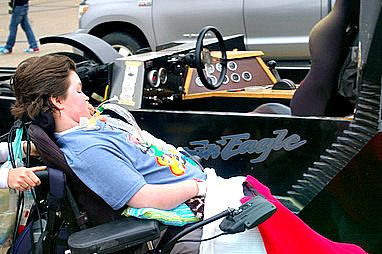 Aidan was moved to a long-term care facility in Edmonton late in 2010. The young guy had endured every curve ball that muscular dystrophy had thrown at him in his young life and won every battle. It took an enormous reserve of personal strength for this young guy to face down his illness and cope with its relentless attack.

The disease had robbed him of his mobility and his speech, but this kid was a real life Rocky because he refused to stay down for the count. Instead he communicated with his eyes and his increasingly limited ability to use a keyboard.

He was every bit his age and liked all the same things any 20 year old guy likes at that point in life- chicks, sports, cars, an occasional beverage and music would be high on his list. He just had to find ways to connect to these interests and the Internet helped him keep a window open on the outside world.

Occasionally we would hear from Aidan via e-mail. Usually it was a very brief inquiry about how we were doing, or even just a smile icon. In fact a smile icon was the last message we received from Aidan and it spoke volumes about the guy.

It was a testimony to a young guy who got dealt a horrible hand of cards from the deck of life but refused to let that hand rule his life. He duked it out every day of his life with muscular dystrophy and won more fights than he lost in the skirmishes.

But he knew that he would eventually lose the final battle and prepared himself for that reality as well as any human being could under the circumstances. He lived his life as best he could and enjoyed any adventure that came his way, including a guest of honor appearance at CASTROL Raceway in Edmonton this past June. 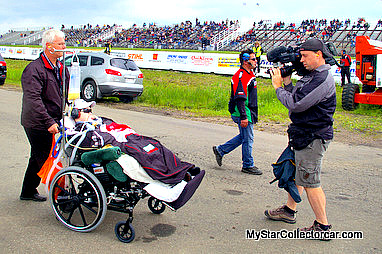 I would like to thank Aidan Fitzgerald because he was a hero to any of us that had the rare privilege to get to meet him in our lives. I am at an age where heroes are few and far between in my life but Aidan runs right at the top of a very short list. He will be missed by many and will serve as a reminder that most of us who are lucky enough to have longer lives can think about this remarkable young guy whenever we need to see what truly matters in life.

Aidan taught us by example.

GERRY:”Very well done, a wonderful tribute to a young man who taught us some very valuable life’s lessons in a short time, awesome story, awesome pictures, especially that last one, what wonderful memories, we shall miss him but love him forever”.

GORDIE:”you are so right about our little car guy teaching us by example.

He will be so missed by so many.Godspeed little buddy, you will always be my hero.

SAMMY:“So very sorry to hear of his passing. I read the articles about him that Gordie sent me.

ROBERT:”Thanks . This story reminds us all how precious life is and how fortunate most of us are. Now I can blow my nose clear my throat and put my handkerchief away…

and remember a wonderful young man who was taken decades before his time. It’s unfortunate he didn’t get to go to many car shows and live a long wonderful life but it wasn’t to be. He sounds like a terrific young man and I’m sorry I didn’t get to met him and his family.