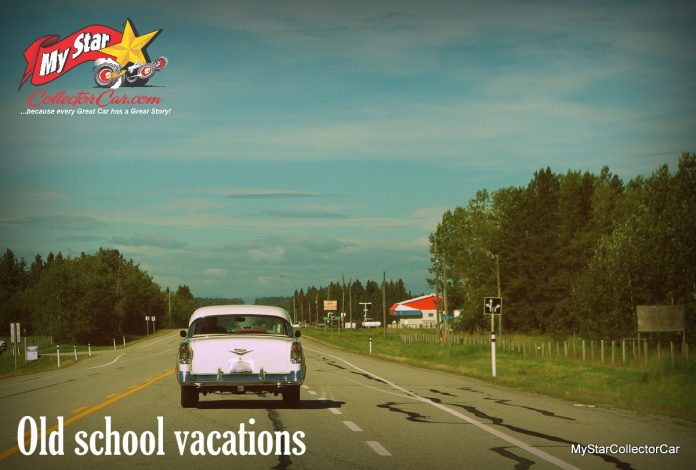 Summer has always been the warmest season of the year here in Alberta Canada, even before it was called climate change by alarmists.

Air conditioning in a car (or home for that matter) was not a big-ticket item for western Canadian families from the past. Instead, they invested in the care and feeding of a large herd of kids. These days a vehicle without AC is as uncommon as a retro vehicle with AC, but those of us from a bygone boomer era can readily recall summer car trips in cars without AC. Our recollections are now steeped in nostalgia because these events represent a substantial chunk of our childhood memories of road trips.

It is relatively easy for me to recall the number of our family’s vehicles that had AC when I was a kid because that number would be exactly none of them. As mentioned earlier, Alberta has short summers and long winters, plus we had a large herd of kids in our family-even by boomer birth rate standards from that era. The net result was AC was not even part of the discussion when it came to my father’s cars at the time. My parents’ investment in lots of kids sidetracked that AC investment in a big way.

Our annual summer road trips tended to include a visit with grandparents in southern Saskatchewan, in a region also known for long winters and short (but hot) summers. It was a region where factory AC made more sense during the iron ore blast furnace temperature phase of southern Saskatchewan summers, but we were only visitors in that torrid summer zone.

Nevertheless, a summer holiday trip was an exciting concept for us when we were kids, even without air conditioning in a crowded car. There were a few ways to get cooler on a road trip inside a car without AC-none of which could compete with AC in terms of chilling out, but it was worth every mile of extreme car cabin heat just to be headed somewhere on summer holidays.

When I was about eight years old, we took a summer holiday road trip through the Rocky Mountains to the interior of British Columbia, so the mountains provided a reasonably solid form of external AC, even if the interior of BC’s Okanagan region has temperatures that meet or exceed those in southern Saskatchewan during the summer.

My dad’s usual course of action to cool down the cabin of the family car was to open the vent windows on his vehicles. Most vintage car vent windows are positioned in front of the side window glass and are typically a form of triangle (or some complicated but similar geometrical shape) that opens and allows air to move within the car.

Vent windows are highly susceptible to air leaks on their best day, but their purported tradeoff is their ability to move air–but not enough to provide passenger comfort on a blazing hot summer day. I learned this grim fact the hard way as a kid in the back seat of a car with open front vent windows on a hot summer road trip.

The lure of cranking down the back seat windows was always there for us when we were back seat kid hostages on a long hot road trip, but it was never an option because the wind noise was deafening at highway speeds, it blew around my dad’s generous array of work-related papers on the rear passenger tray and, most importantly, it flat-out did not cool down the vehicle’ interior under extremely hot conditions.

Occasionally we would give it (cranking down the rear side windows) another try and hope for a different outcome that possibly cooled down the vehicle, but we had predictable results in that blazing hot, noisy, and instantly chaotic world inside the family chariot. The only thing louder than the high-speed wind noise was the sound of my dad yelling “Close that damn window before everything blows out”.

A HARDCORE CAR GUY IN THE INSURANCE GAME—A LOOK AT STUART...