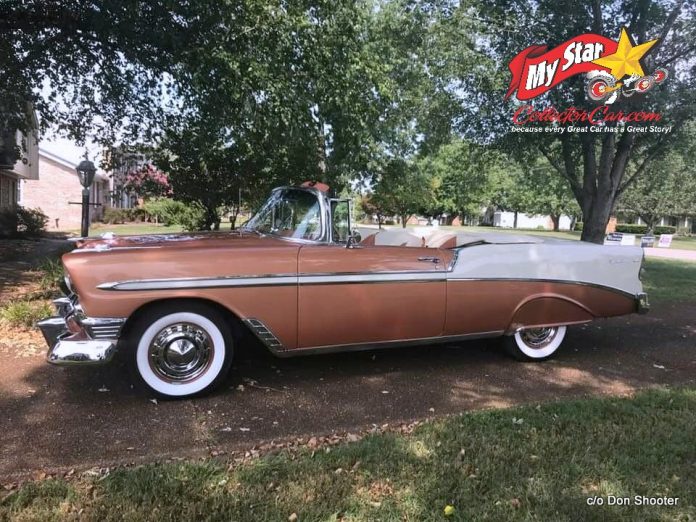 The Tri-Five Chevrolet models are the stuff of legends in the car hobby.

1955 marked the debut of the then-new look Tri-Fives and the 1956 Chevy was the ‘tweener in the trio. The impact of the Tri-Five models is still felt in the collector car hobby in 2021 and has captured the hearts and minds of generations of car guys over the years.

However, Don Shooter was an early member of the large Tri-Five fan club because he was already in his late twenties when the Tri-Fives were leaving the GM factory during the mid-1950s. The striking style of the cars caught Don’s eye in a big way, but it was not in the cards for him to own one in 1956.

Fast-forward to 2003 when Don discovered a 1956 Chevy Bel Air convertible at a junkyard. The future looked cloudy for the car because it needed plenty of work and was well past its better days. Don was in his mid-70s and still working hard at his business, but he decided to buy the ’56 Chevy and restore it back to the road.

Don is not a mechanic or body man by trade, but he is well-schooled in the automotive world and “restored a few cars over the years (typically Pontiacs)”, in his words, prior to tackling the stylish Chevy convertible restoration.

Don believes in originality, so he has always chosen to restore a vehicle back to its factory roots, but added, “There’s a place for modified (resto mod cars)-if that’s your thing”–but it is clearly not Don’s thing.

The Chevy was restored with its 265 cubic inch V-8 engine hooked up to a 2-speed Powerglide automatic transmission, a lively powertrain combination in 1956. Just for the record, the 265 Chevy V-8 was a direct predecessor to the famous 283 and 350 cubic inch Chevy engines.

Don is also confident in his car’s 265 small block performance and stated his ’56 Chevy convertible can “stay with the crowd” on highways upon request. Don likes to keep the pace at 65-70 mph (roughly 105-110 km/h) when he is behind the wheel of the car on a fast road.

Incidentally, Don loves to drive his car–and who can blame him? The restoration took about 15 years and Don tackled most of the work himself over that time frame, mainly because of the cost factor according to him. “When you don’t have enough money, you do things yourself”, in Don’s words. In other words, Don earned his driving reward the hard way over 15 years, although he used professionals for the final paint and upholstery in his Chevy.