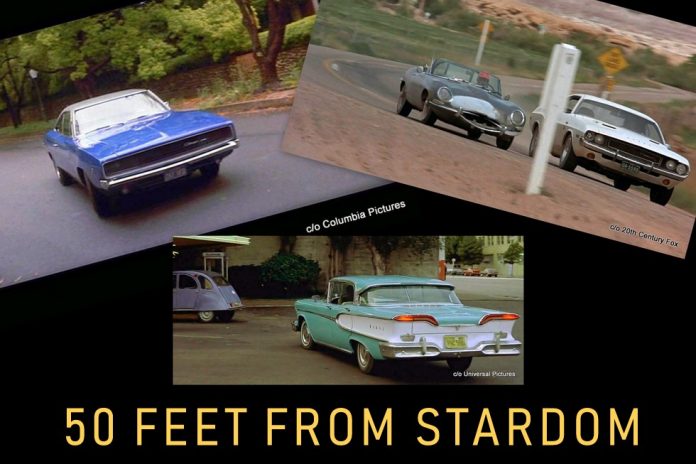 There are a few movies that put a rare spotlight on the backup musicians and singers who accompanied the stars on stage and in the studio.

The backup people may even have possessed more talent than the actual stars, but they had not been dealt the right cards in life required to step out of the shadows and grab center stage.

One of the superstar cars in early Seventies cinema was the 1970 Dodge Challenger in ‘Vanishing Point’. Most older car guys will remember the movie as one long chase scene with some of the best driving stunts in movie history as the Challey driver attempted to avoid arrest across several states.

The misadventure also included a sequence with the Challenger facing off against a 1966 Jaguar XKE roadster that was a match for the Challey- right up to the single lane bridge incident when the Jag was unable to out-accelerate the Challenger.

Pun intended, the Challey was the runaway choice for number one car in ‘Vanishing Point’ for us here at MyStarCollectorCar, but that Jag roadster was an amazing car. Nevertheless, the XKE had to play second fiddle in a big way to the famous Challenger in ‘Vanishing Point’ and, even though we still would not have it any other way, the Jag was indeed a star in that movie. Just not the main star.

Another movie car that played a background role was not even a second or third billing star in ‘American Graffiti’. Most people remember Milner’s yellow ’32 deuce coupe as the main car star in the famous movie. Very cool also-rans included the black ’55 Chevy, the Pharaoh’s ’51 Merc lead sled, the white ’58 Chevy Impala, the white ’56 T-Bird — and even the pale blue French go-kart/1967 Citroen driven by nerd-extraordinaire Curt Henderson.

But how many fans of ‘American Graffiti’ would even care about the 1958 Edsel Corsair four-door hardtop driven by Curt’s movie sister Laurie? This car was unloved by the buying public during its infamous production run and may even have been the perfect vehicle for Laurie Henderson in the movie because it never crowded her out of a scene. It also never crowded center stage for any of the other cars in ‘American Graffiti’, let alone the famous deuce coupe in the flick.

The last addition to our list was a cool car that had some degree of difficulty remaining in the background as a bit player in ‘Christine’. The famous horror movie starred a 1958 Plymouth Fury that was possessed by an unidentified evil entity and unleashed unholy hell on its detractors.

A wild-looking and murderous Mopar finned car from the Exner years would be impossible to push out of center stage, but a very cool blue 1968 Dodge Charger bit player also captured the attention of movie-goers during the early 1980s when ‘Christine’ debuted in theaters.

Not enough to wrestle the spotlight away from Christine (the bad ass ’58 Fury), but definitely a notable cinematic also-ran for us here at MyStarCollectorCar.