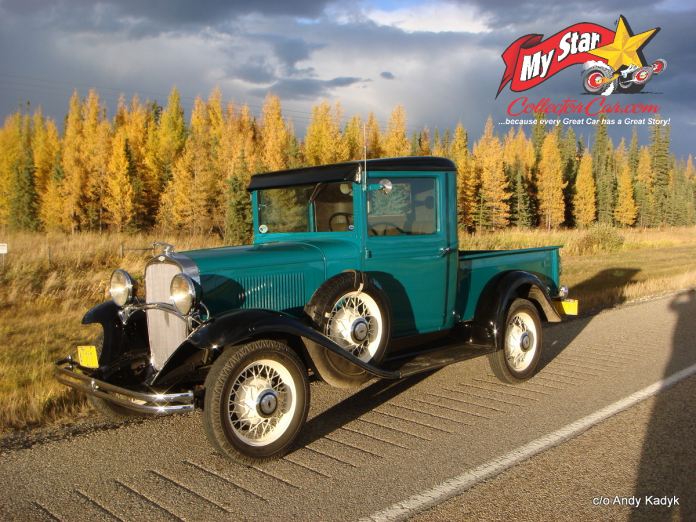 Trucks from the 1930s rarely survived past life on the farm because they were pounded into dust then scrapped.

The majority of the few that did survive were turned into street rods, but occasionally you’ll find a classic pickup in stock form.

Andy Kadyk is the proud owner plus he’s also a student of the truck’s history: “According to information I received from General Motors Canada, only 180, 1933 Chevrolet Model 155s were produced in Canada, though many more were built in the USA. This is number 157”.

There’s a direct family link to this pickup as Andy explained: “It was purchased used, by my wife’s uncle Roy Unsworth  from a farmer in the Hanna, Alberta area when he returned from the war in Europe in the 1940s.  It served as a farm truck and family transportation until sometime in the mid 1950s when it was parked along a row of trees on the family farm.

“Apparently whenever Uncle Roy was a bit short of money to finance a hot date or whatever, he would sell the truck to one of his four brothers and then buy it back when he could afford it”.

Andy made his move on the family legacy: “I acquired the truck, after many years of begging and negotiating with him in 1980. At the time I didn’t even know that it was a Chevy, or anything about it. All I knew was that it was a cool-looking old truck and I wanted to fix it up and drive it”.

This was a typical project: “I had no idea what I was getting into. The first year I had it I dismantled it, cleaned it as best I could, sandblasted the frame and had the engine rebuilt.  Rebuilding the engine involved installing sleeves in three of the cylinders as the carburetor had been removed and moisture had badly corroded the cylinder walls and pistons”.

Years went by, “The truck then sat in my shop and became a storage place for old lumber and other things for about 15 years. For some reason my wife felt that our money would be better spent raising and educating our 3 children and making mortgage payments on our house”.

Andy decided to finally push the truck project over the goal line:“In 1999 while cleaning up my shop I decided to try to start the engine. It actually fired up fairly easily and sounded absolutely wonderful.  Now I had the bug and wanted to finish it”.

There were some low points in the project: “This became another nightmare. I seemed to have a knack for finding poor and unscrupulous body men. Much of the work I hired out had to be undone and redone because of poor workmanship. Some of the panels had to be replaced.

“When I inspected one of the “repaired” body panels, I found it was over 1-inch thick with body fill material.  Another problem we encountered was we could not get the hood and grill to fit properly.  After doing some research we realized that the hood and grill that came with the truck were from a 1935 Chev truck!”.

Andy’s luck finally changed: “In 2004, I found a young body man in Sundre, Alberta who took an interest in my truck and did a superb job of restoring and painting the truck for me.

The length of the project was a factor in the story: “Unfortunately, Uncle Roy passed away before the truck was finished, so he did not get to see his truck restored to its present state. His children, grandchildren and brothers have all had a ride in it”.

Andy has mapped out the future of this rare truck.