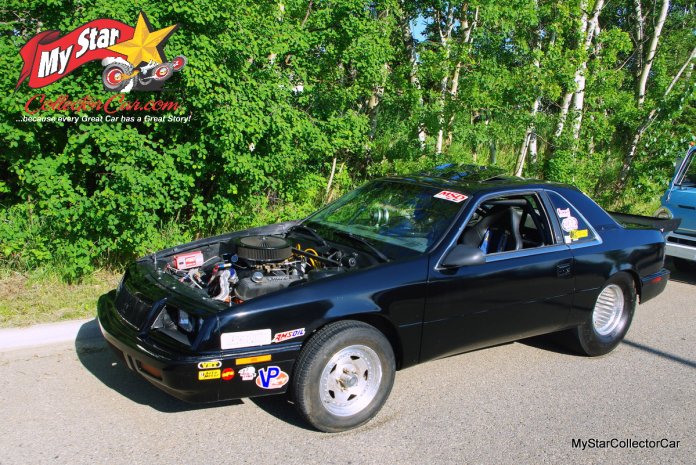 The 1987 Chrysler LeBaron was a Mopar with strong K-car roots.

MyStarCollectorCar discovered a 1987 Chrysler LeBaron with a brand-new bad attitude built into it and was fortunate enough to interview its owner. The first thing that jumped off the page was the car’s menacing new look, one that confused onlookers into believing it may even be a Fox Body Mustang.

It was not a Mustang. In fact, this car was now the kind of street monster that hunts and kills Mustangs. Owner Justice Lentz and his father transformed the mild-mannered ’87 LeBaron into a stone-cold killer over a two-year period that required Justice’s undivided attention and spare time.

Justice’s dad is an accomplished racer who has spent the past 40 years in the sport and learned plenty along the way, therefore Justice wanted to give his father full credit for his role in the transformation of the LeBaron from mild to wild.

We mentioned Justice’s LeBaron was originally a front wheel drive car with modest power under the hood. Justice and his dad decided to use a tubular custom chassis that could handle a huge horsepower boost- while delivering all that new engine muscle to the rear wheels.

The father and son team used a 340 engine from a 1970 donor vehicle as the base for the transformation and built the famous small block into a 409 stroker with a nitrous boost that delivers about 600 horsepower to the aft section of the LeBaron.

It was hard not to notice the wheelie bars on the back end of the ‘87 LeBaron, but Justice told MyStarCollectorCar he was actually looking for style when he added them to the car’s overall look. Nevertheless, the wheelie bars and roll cage in the LeBaron are a good idea when one considers the incredible potential for power that rests comfortably under the hood of the car.

Justice also mentioned his LeBaron was only the second car he has ever owned — and it is the longest time he has owned a car in his young life.

It is likely no surprise the beefed-up LeBaron was a track car during its first year after the project’s completion by the father and son team, but it should be a big surprise the car is now a daily driver for Justice.

In fact, Justice mentioned he had put over 200 km (about 120 miles) in the week leading up to his interview with MyStarCollectorCar. It is a bold decision by Justice, since the LeBaron is geared for the track and sports a quarter mile-ready Ford rear end on the car.

The net result is a low-geared car that screams on the highway and uses a very generous amount of gas on road trips-but Justice is not deterred by its meager MPG numbers because the LeBaron is now a raging beast of a car that demands attention from onlookers.

Including us here at MyStarCollectorCar.