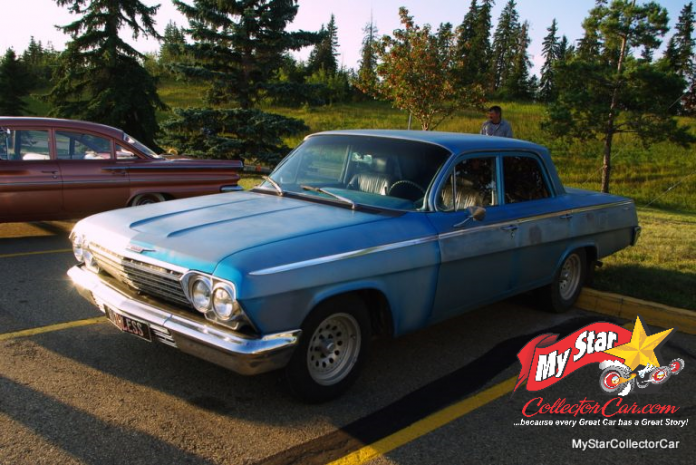 Four-door sedans are the mules of the car hobby.

There are many reasons for this but the biggest one is mules are built to work hard so appearance is at the bottom of the list of options.

Randy Legge is the proud owner of a 1962 Chevrolet Bel Air 4-door sedan and he owes it all to his dad’s taxi business. He explained how his dad “owned one and it was in an old picture” so he knew he wanted a sedan just like the one his dad drove for a living.

Randy bought this Bel Air 15 years ago via an old-fashioned printed ad and it was definitely a project at the time. The previous owner had taken it apart but the “putting back together” part was a little more difficult. Basically Randy bought a rolling chassis with no interior but it did come with a 350 small block and a number of extra parts.

The 350 was out of a ’69 Camaro and Randy had a lineup of people wanting to buy it because he wanted to go back to a more-correct 283 V-8 so it became expendable. He found one in an Impala and it turned into an adventure after he had it rebuilt. He went to a local engine builder who had a good reputation but unfortunately he failed the test on Randy’s vintage small block.

There was a major issue with a valve spring that was eventually diagnosed by another shop after the first shop had a few unsuccessful attempts to repair it. Randy was disappointed but determined so eventually the problem was solved—but only after a bunch of hoop jumping. The broken spring had done its damage so the heads had to be redone by the original shop.

Randy wanted something he could “drive on holidays” so reliability was his first priority. He “picked away at it” for over a decade to reach that point and on the way he sacrificed “a lot of cars to get it where it is”.  He addressed everything under the car from the brakes, rear end, transmission and  suspension because this is a driver in the truest sense of the word.

He sourced out some seats for the Bel Air because it had none but he wanted something that was comfortable so he opted for power leather seats out of an early 90s Chrysler. They are functional and incredibly comfortable so Randy solved the missing interior issue in a big way.

Randy found some wheels he forgot he had purchased at a swap meet 13 years ago but now he proudly runs them on his ’62 Bel Air even though his dad’s car ran stock wheels years ago because he likes the custom look—and this isn’t a taxicab.

The Bel Air is sound mechanically but Randy has plans for a two-tone paint job featuring a factory color to finalize the project. Until then he’s a happy guy on the road in this classic 4-door tribute to his dad.

JANUARY 2013 STARS OF THE SHOW–A LOOK BACK AT SOME CLASSIC...