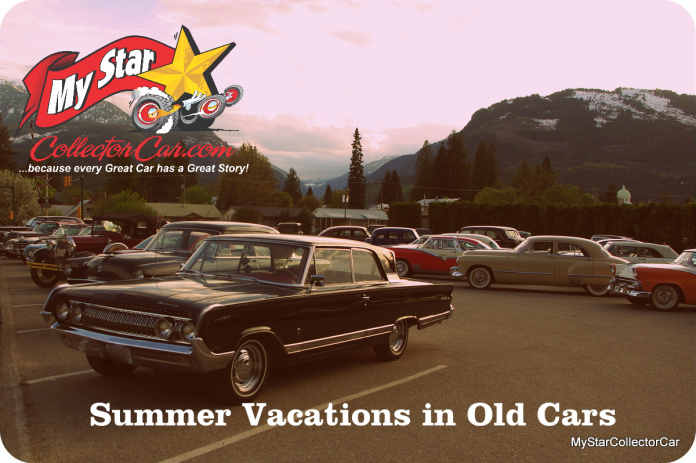 There was a time (shortly after Fred Flintstone used foot power to propel his car) when many of us took summer holidays via long road trips.

We were kids from a generation that had only one outside communication link: an AM radio with signals that faded in and of reach, depending upon distance and whether daytime had drifted into nighttime when broadcast signals got weaker. The radio may even have warned listeners before the day/night switch with an announcement that took place one hour before sunset that it was “now time to turn on your headlights”.

We at MyStarCollectorCar found five good reasons to remember our kiddy days on the road with a sense of unbridled fondness.

The first reason? We made our own entertainment in a car. Typically, that meant beating the hell out of the nearest smaller kid squeezed into the back seat with us. The rules of engagement were pretty simple: turn a younger brother or sister into a speed bag before he or she could flex their vocal cords and notify the adults in the front seat.

The second reason? We got to test our mental discipline when we encountered some turbulence in the car sickness field as it applies to kids stuffed into a car. The rocking motion of an old car was an excellent source of nausea and we tried to combat the sensation as much as possible. The net result was an unplanned eruption of vomit that came without warning and wiped out everything in its path. It’s a scientific fact that no amount of plucky (but ultimately futile) kiddy determination to avoid puking was ever enough to stem the tide of vomit for that same young passenger in an old car.

The third reason? We got to sharpen up our lip-reading skills in an old car. Drive-in theaters were a major component of every community during a bygone era long before the dawn of 4K smart TVs and a trillion-channel video universe.

Those of us who rode in retro cars when they were new and we were young can easily recall summer road trips that went into the night when drive-in theaters came alive-when they were an amazing reminder that a small town in the middle of nowhere had people-and they went to drive-in movies.

We wanted to join them at the drive-in but that was not going to happen, so we simply watched them without sound in a car moving at 60 mph and filled in the blanks on the dialogue until the drive-in disappeared in the background of darkness and highway markers. Until the next town with the next drive-in built next to the highway.

The fourth reason was the thirst-quenching ability of the canvas bag dangling from the side mirror or hood emblem of the cars from a bygone summer holiday era. The concept was basic because the highway speeds were supposed to provide a cooling effect on the canvas water bags. We (the former kid passengers) never found cold water in the bags after a hot dusty summer road trip, but now believe these canvas bags would have been perfect for boiling food products.

The fifth and final addition to our list are vent windows in an old car. Vent windows were voted most likely to pass for air conditioning in cars from the past but fell well short of that goal during the summer months. However, they were considered a box left empty on the option list by frugal car buyers who instead decided to check off the many-kids option on their life list.

Vent windows allowed a fair amount of air to enter the car’s cabin-even when closed-but they were not exceptional when it came to cooling the cabin. Vent windows were more like a placebo that did not work, but these days they are another fond reminder about summer road trips riding in old cars that were new cars at the time.

HOW HIPPIES HURT THE CAR HOBBY