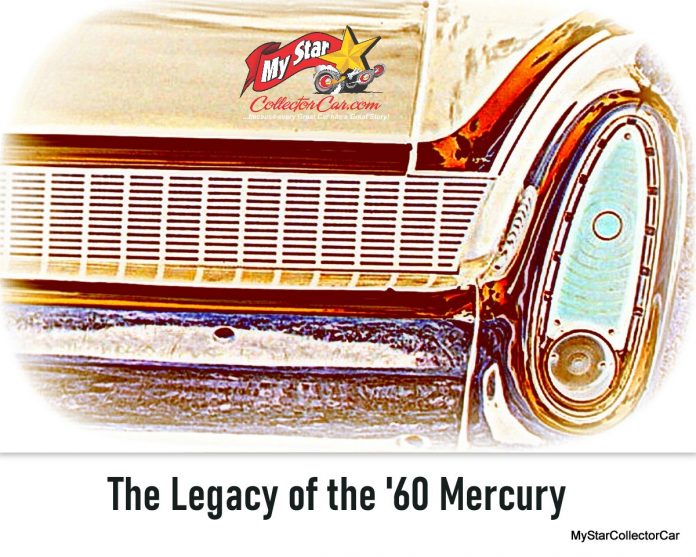 Domestic car design took off like a rocket during the back nine of the 1950s.

Most of Detroit’s finest ran with the program and reinvented themselves with a shiny new facelift every year. The best of them defined the late 1950s in a big way, while others such as the Edsel crashed and burned shortly after takeoff during its brief 1958-60 production run. In fact, the 1960 Edsel was a futile attempt to dial down the unusual style of the earlier Edsel years, but it was a day late and a dollar short in the eyes of the buying public.

Ford’s other luxury model wannabe was the durable Mercury, a marque that also underwent some wild design changes during the late 1950s but did not become the core subject matter for every hack comedian-unlike like its Ford stablemate, the Edsel.

One could successfully argue that Mercury built outlandish cars that ran with the big dog (Edsel) on any track in terms of outrageous design during the 1958-60 production years but, fortunately for Mercury, its models did not garner the massive negative attention generated by Edsel.

MyStarCollectorCar decided to concentrate on the 1960 Mercury because this car was an incredible departure in overall style from its 1959 predecessors since Ford wanted to embrace the 1960s with a bold new design. In fact, a 1960 Mercury would drop jaws much faster than a 1960 Edsel in our opinion here at MyStarCollectorCar.

The net result was a striking departure from Ford’s traditional headlight placement on their cars and, to be polite, were an acquired taste-but got more thumbs-ups from the buying public than any Edsel front end configuration.

The most important element of the radical 1960 Mercury design was simple: it was not a Ford. Ford models were lower on the Blue Oval totem pole in terms of prestige than Mercury models, so Mercury actively sought to distance itself from Fords in 1960. The placement of the headlights alone would get our vote for the style differences- good, bad, or indifferent.

The rear end of the 1960 Mercury was also a complete departure from Fords and employed a curvier, elongated vertical taillight design that was reminiscent of afterburners on a rocket, undoubtedly a nod to the early days of the Space Race between the US and Russia.

However, we at MyStarCollectorCar believe the unique rear roof/window design on sportier versions of the 1960 Mercury was its most eye-catching feature because the elongated glass behind the Merc’s C-pillar made the car an early pioneer in the fastback movement for 1960s cars.