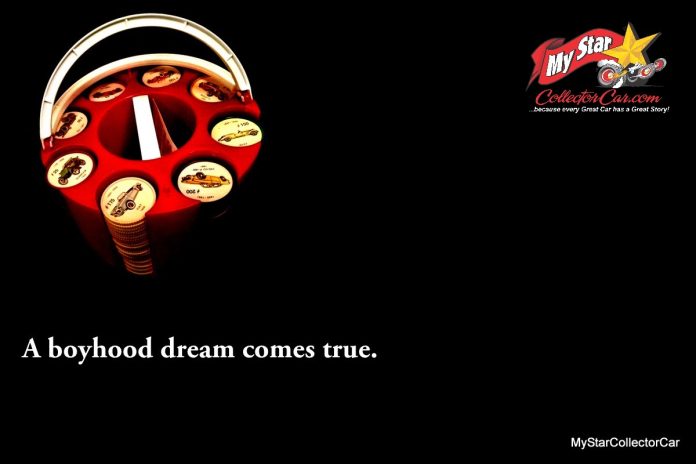 Jell-O pudding was already a big-ticket item in every kid’s world when its parent company General Foods of Canada introduced car wheels during a Canadian promotional campaign in 1961.

I was still on my literacy learner’s permit in 1961 because I had only just mastered reading basics the previous year in Grade One-with no kindergarten experience to give me a leg-up on basic literacy skills. Fortunately, I had a keen interest in reading, so I got in the game early because I wanted to absorb as much information as possible in the shortest possible time.

Consequently, the Jell-O Car Wheels campaign specifically designed to ensnare car kids with a major pudding addiction hit a bullseye with me. Jell-O placed a Car Wheel in every package of their puddings from 1961-63, so the idea of an automotive prize in every package (with two Car Wheels in larger family size packages) was the figurative cherry on top for me.

Jell-O upped the ante with their Car Wheels promotion by offering a carrying case that bore a close resemblance to a poker chip container and could be purchased for 50 cents plus postage (11 cents) in 1963.

The cost was minimal by 2022 standards, but it was a substantial investment for a very young kid in early 1960s grade school with no real job prospects outside of an allowance. Nevertheless, my twin brother Jerry (co-founder of MyStarCollectorCar) and I were able to assemble enough coin to buy the Car Wheels container and the Fact Book that came with the purchase.

The Fact Book had photos of every one of the 200 cars showcased in the Car Wheels collection, along with a generous supply of written information about them, so my new reading skills got a workout when it arrived in the mail with the carrying case.

However, there was a major problem with the Jell-O Car Wheels promotion: duplication. The Jell-O people placed the same car wheel in their shipments on several occasions and disappointed their young customers whenever the same car wheel was found in a different package.

It was a huge issue for me as a kid because I kept my end of the agreement every time I wolfed down massive amounts of Jell-O pudding and badgered my parents to buy more of the dessert. Bear in mind I was a kid who grew up in an era when parent-badgering was not a great game plan because of the possible consequences, but we (Jerry and I) wanted a complete Car Wheels collection and were willing to risk it.

Sadly, the Car Wheels promotion ended before we were able to collect all 200 of them and it became the first major disappointment in our young lives. The grim truth about Santa was revealed in our then-near future and would become our second disappointment during the 1960s.

Eventually the incomplete Car Wheels collection disappeared into mists of time and presumably the garbage can in our backyard, never to be seen again- or mourned because of its incompleteness.

But Car Wheels would never be forgotten, so a recent opportunity to purchase a complete collection, including the original mailing box that contained the quasi-poker chip Car Wheels container and Fact Book became an irresistible urge, so I bought it.

I finally got to right an egregious childhood wrong committed by a pudding company and own every one of the 200 car wheels from an early 1960s promotion. I will celebrate the occasion by sharing my favorites in a future series of MyStarCollectorCar articles about these car kid treasures from the past.