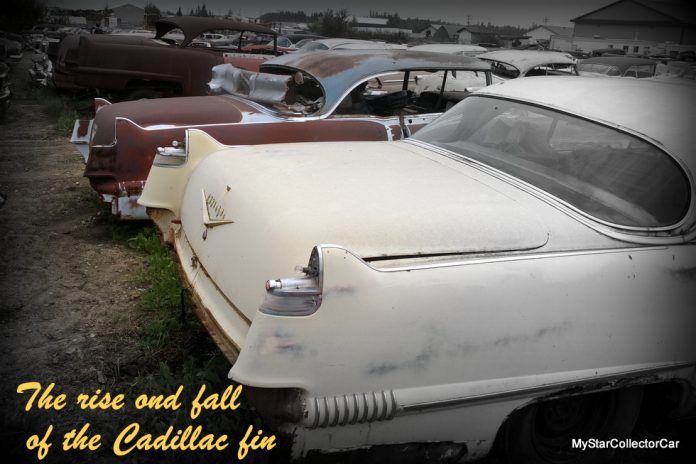 Cadillac is a car brand that has a long association with tail fins-even though it was never (as in ever) a member in good standing of arch-rival Chrysler’s famous “Forward Look” finned gang of Mopars from the 1950s.

The advent of the Caddy tailfin began many years before the Coupe De Ville’s fins scraped the stratosphere in 1959.

In fact, a solid case could be put forth about the debut of the Caddy’s prewar tail fins that were very subtle and essentially an ornamental feature on the taillights.

The microscopic fins on the prewar Cadillac models continued basically as a chrome addition to the taillights until the Second World War changed General Motors from a civilian car builder into a very large military product manufacturer. Post-war Caddy tail fins and body styles locked into a prewar design until the debut of the 1948 Cadillac when the tail fins became an integral part of the rear fender contour on it.

The tail fins were part of a radical new design for the ’48 Caddy and the sleek new body shape preceded the lesser GM models’ style changes by a year. It would be fair to say the tail fin came out of its figurative shell on the Cadillac in 1948.

The golden age of the Caddy tail fin continued to thrive through the early 1950s and entered a noticeable pattern of growth with the debut of the 1954 Cadillacs.  The fins on the ’54 Caddys were hard to miss on the back end of these flagship GM models and they were the precursor for a wild new phase in the Cadillac tail fin program.

In 1955, the Cadillac game-changer was their Eldorados because these high- end luxury models from the General sprouted some very tall tail fins. It was the dawn of a new Space Age era and the rocket theme got heavy buy-in from the car designers in Detroit when the ’55 Eldorado was a finned beauty that looked ready for takeoff.

By 1957, the large tail fin game plan was also evident in other Cadillac models and elevated these luxurious GM models into the hotly contested finned car wars from the late Fifties. The tail fins on the Tri-five Chevy models reached the peak of its Mt Everest of style in ’57, but the Caddys still had room to reach for the stars in GM’S finned car program.

That moment of Cadillac tail fin greatness would take place in 1959 when General Motors unveiled its then-new Coupe de Ville model; a ride that has grown into legendary status in both the car hobby and popular culture. However, the ’59 Coupe de Ville actually took second place to a limited production Cadillac Eldorado model that year when it came to large-and-in-charge tail fins.

1959 would be a watershed moment for Cadillac tail fins because the flagship GM cars would never again reach the same heights with them. The 1960 Cadillacs still had massive fins on their rear fenders, but the cars fell short of the Mt Everest tail fin heights achieved by the ’59 Caddys.

Cadillac’s tail fin legacy would continue for many decades-with fins that would eventually retreat into the rear quarter panels and become a pale imitation of the Fabulous Fifties Caddy models.

The golden age of the tail fin was long gone at GM by the time Cadillac leaped headlong into the luxury SUV and performance car market in the 21st century.