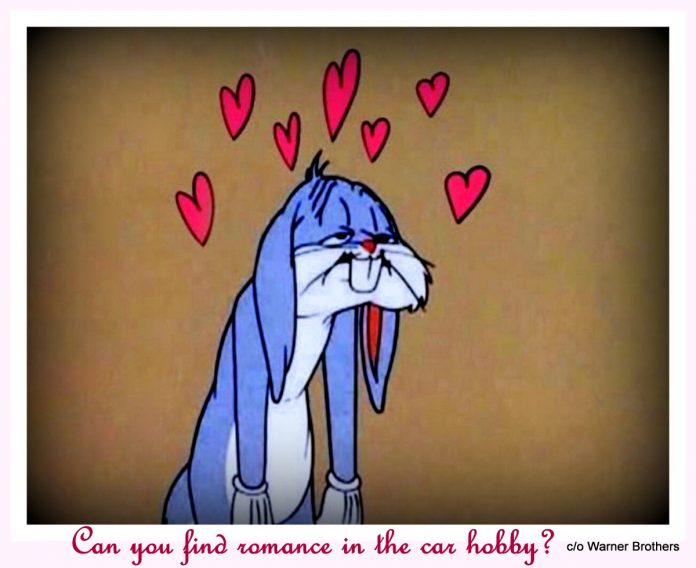 Today is Valentine’s Day so flower delivery numbers are spiking, and restaurants are packed because–let’s face it guys–you have no choice.

The question is, can you find romance in the car hobby?

That’s a loaded question because romance is such a fluid concept. You don’t get your Basset Hound flowers for Valentine’s because he’d probably eat them, but nobody can question the strong bond between dogs and humans–it’s pretty close to Valentine’s Day worthy.

The same thing applies to classic iron. Your Mustang is a bunch of parts bolted together so it shouldn’t have the same heartwarming, endorphin-producing, power found in your Basset Hound–but it does. Ask any guy who sits in his shop just staring at his Mustang in the off season. They won’t admit it, but that car gives them the same endorphin rush as their dog.

This brings us to human relationships. They are clearly more complicated than Basset Hound or Mustang relationships, but there is definitely a strong romantic thread throughout the car hobby. The best stories are the ones where a couple tracks down their honeymoon car and gets it back.

MyStar has a few of these stories in the archives and in some cases, the car was a basket case, but the couple decided to bring it back–at any cost. The odds of a wife agreeing to a six-figure restoration on a car that is worth a fraction of the cost when it’s done are a million to one. Unless it was their honeymoon car–that’s a game-changer.

There are even cases where the couple never sold their honeymoon car because they were so attached to it. For the record, this happens more often than the “finding your honeymoon car again” scenario. It speaks volumes about how important that car was to the couple’s biography.  Also–for the record–this scenario is pretty rare because if the honeymoon car was a convertible, it won’t survive the first kid in 999 out of 1000 marriages.

Sometimes the story ends in a different way. There are a few stories in the MyStar archives where a beloved car outlives the marriage. The story is always the same–the car came before the marriage, so it survived a breakup. The breakup record so far is two marriages. You can’t question that kind of commitment–especially on Valentine’s Day.

Another romantic side of the car hobby is how it brings couples together. They go to car shows as a couple, and you’ll often see both names on the owner card at the show. There’s a reason for this–a car project is a major investment, so any guy who doesn’t consult his wife runs the risk of entering the aforementioned (and dreaded) multiple marriages/one car world.

Sometimes you’ll see the perfect relationship. That’s the one where the couple piles into the project as a team, so they take on every nasty job themselves. This is rare, but in my opinion, the couple who scrapes off undercoating together, stays together. The only downside to this scenario is a fistfight in court if the couple splits–don’t forget–both parties have blood in the game.