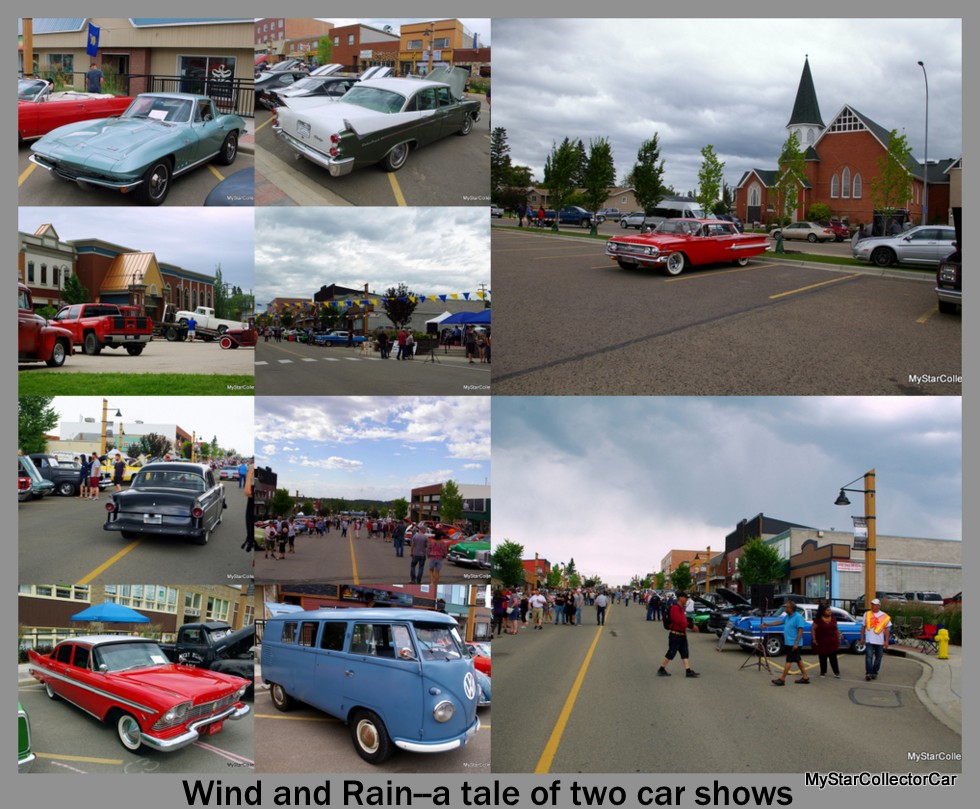 There is one reason MyStarCollectorCar has nothing but admiration for the people behind the car shows: Weather.

These dedicated volunteers work tirelessly to assemble a car show and then cast their fate to the wind (and rain). 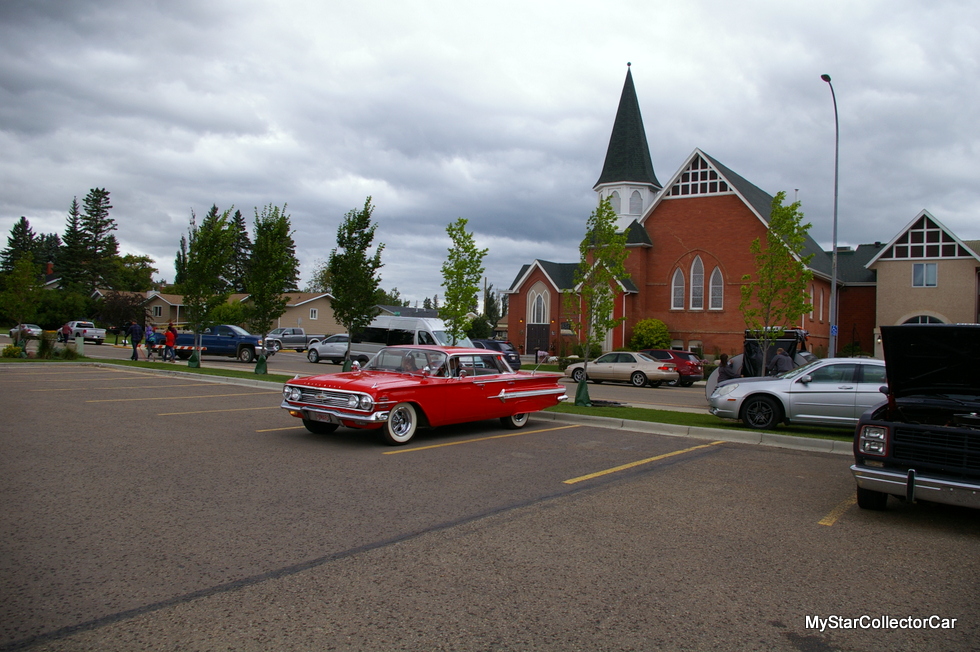 Car show organizers duke it out with the weather gods and hope their day in the sun actually takes place in the sun. It all boils down to one day for the car people and, if the weathers gods are not angry at them, it is one fine day. 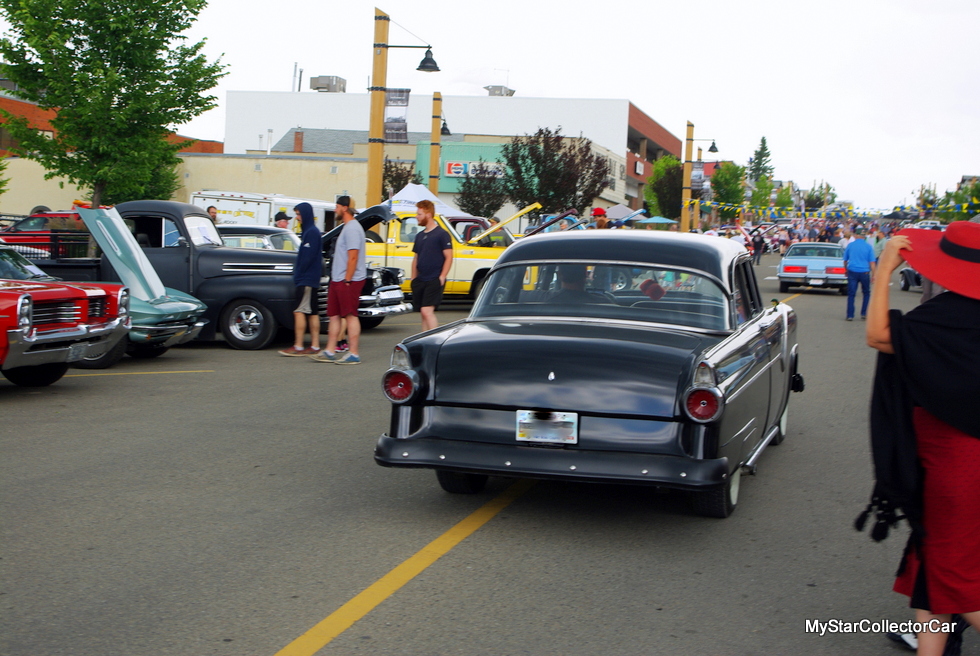 This weekend, MyStarCollectorCar attempted to attend two car shows in one day because the geographical logistics were in our favor–unlike the meteorological logistics.

We headed to the picturesque community of Rocky Mountain House, Alberta for our first show and arrived before the weather became a factor in their event. 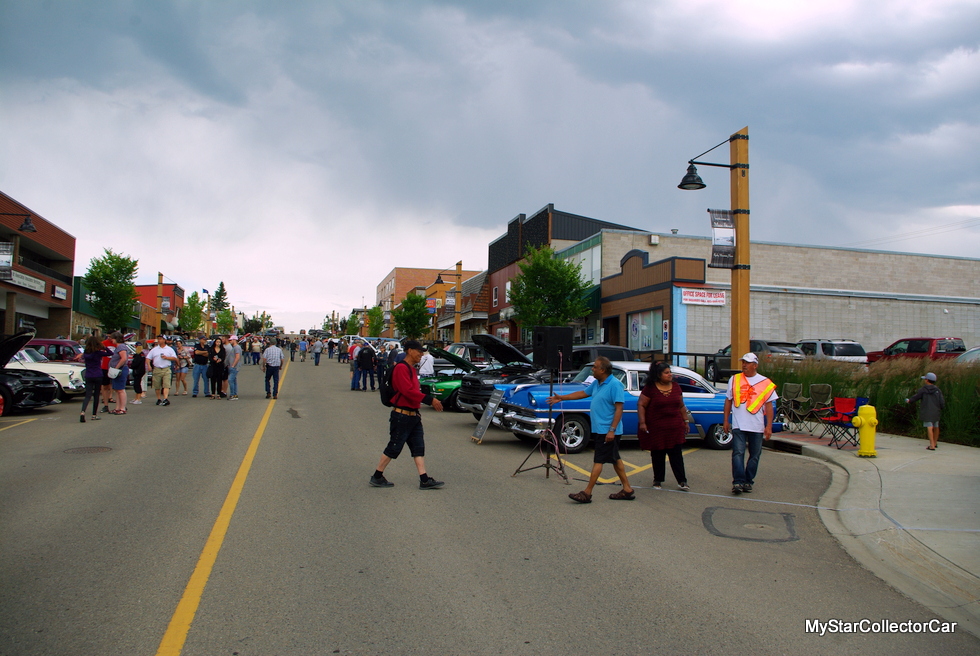 The Rocky show takes place on their hilly Main Street because Rocky Mountain House is a gateway to the famous Rocky Mountains in West Central Alberta. 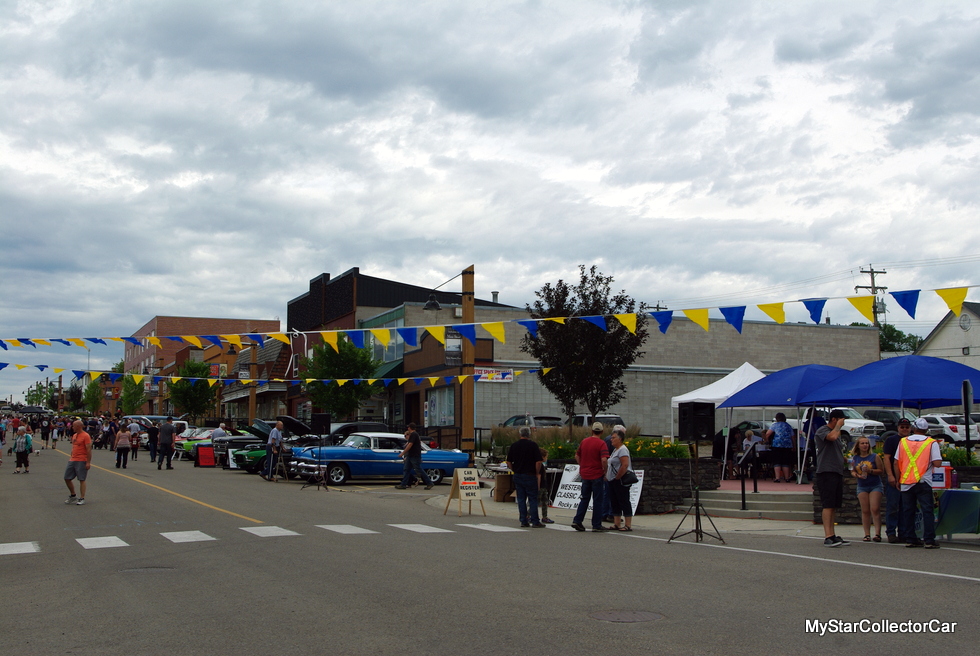 A 1957 Volkswagen Kombi was a rock star at the show because very few of these iconic hippy wagons still exist in the 21st century. The VW’s owner was too young for the Elvis era-or even the Summer of Love (1967 to be exact)-but he had his own good reasons to own the highly unusual 62-year-old VW micro-bus. 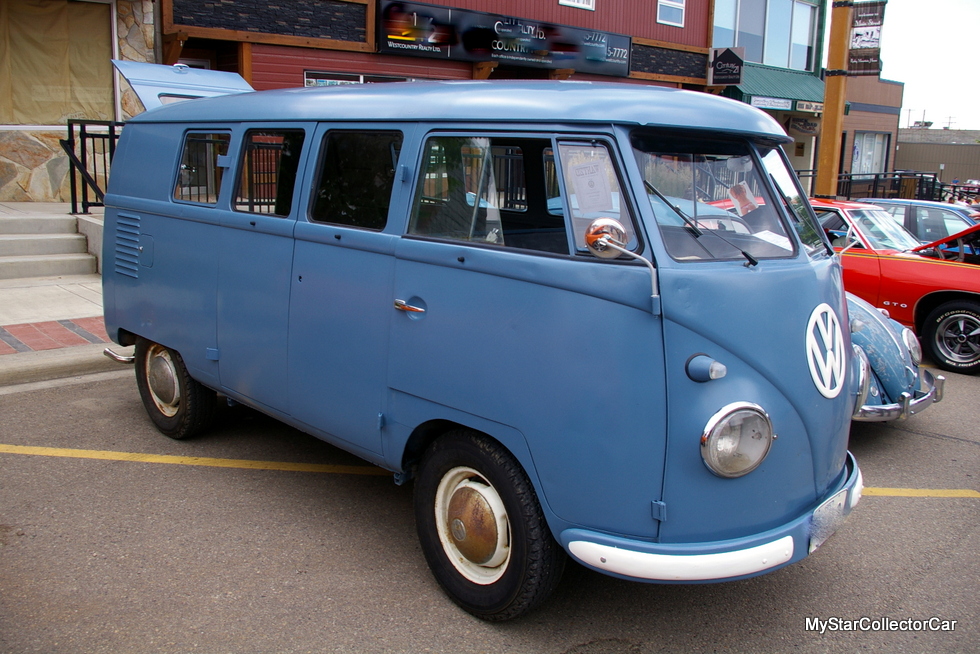 Read all about the ’57 Volkswagen Kombi in a future MyStarCollectorCar article.

Another vehicle at the Rocky show was also built in 1957: a ‘57 Plymouth Belvedere four-door sedan. Its owner was a talented young car guy who was heavily influenced by the 1958 Plymouth Fury named Christine from the horror movie with the same handle. 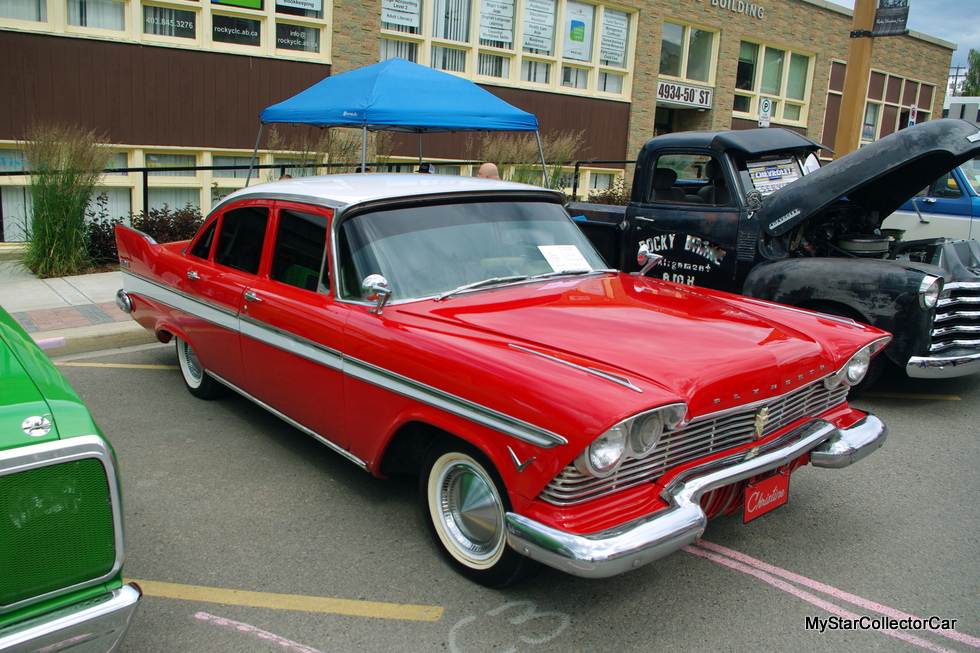 However, there was a happy story behind the owner’s ’57 Plymouth and he was willing to share the story of his legitimate barn find with MyStarCollectorCar for a future feature about this finned beauty.

A 1966 Corvette Stingray had plenty of admirers at the Rocky show. The Vette was both a beauty and a beast. The clean fastback lines of this second generation Corvette put forth a strong argument for the beautiful part of the equation, while the car’s 427 (factory) big block engine provided more than enough beast mode for the Vette. 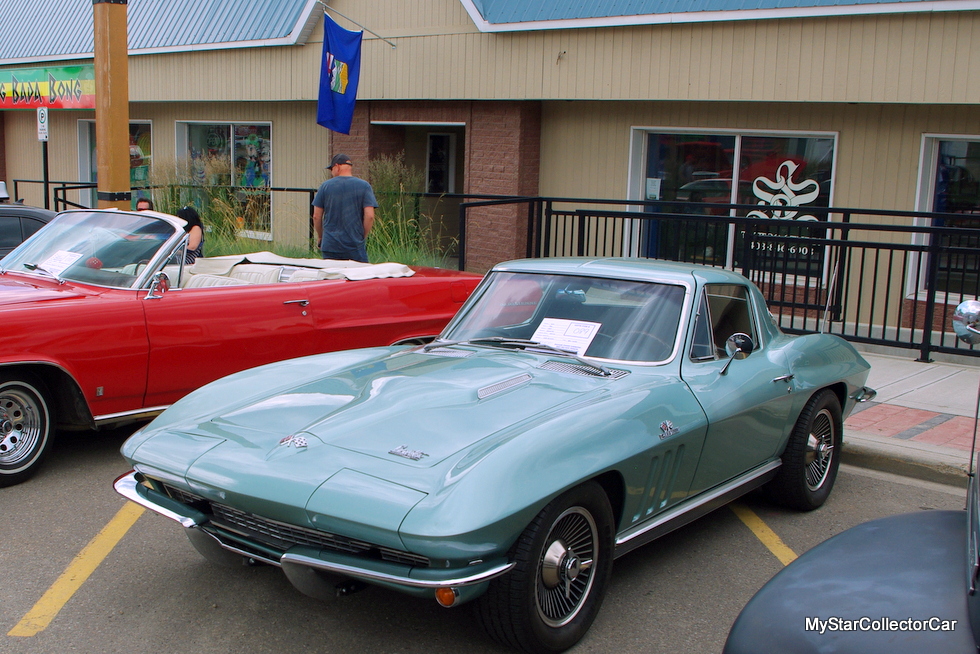 There is a compelling reason why its owner decided he needed a 1966 Corvette fastback equipped with the biggest engine offered by GM that year and MyStarCollectorCar will reveal his reason in a future article.

Our final story from the Rocky show was another finned beauty from the Exner era at Chrysler: a 1958 Dodge Custom Royal four-door sedan. These cars are not plentiful in the 21st century because most of these unusually-styled Mopars are long gone from the road. 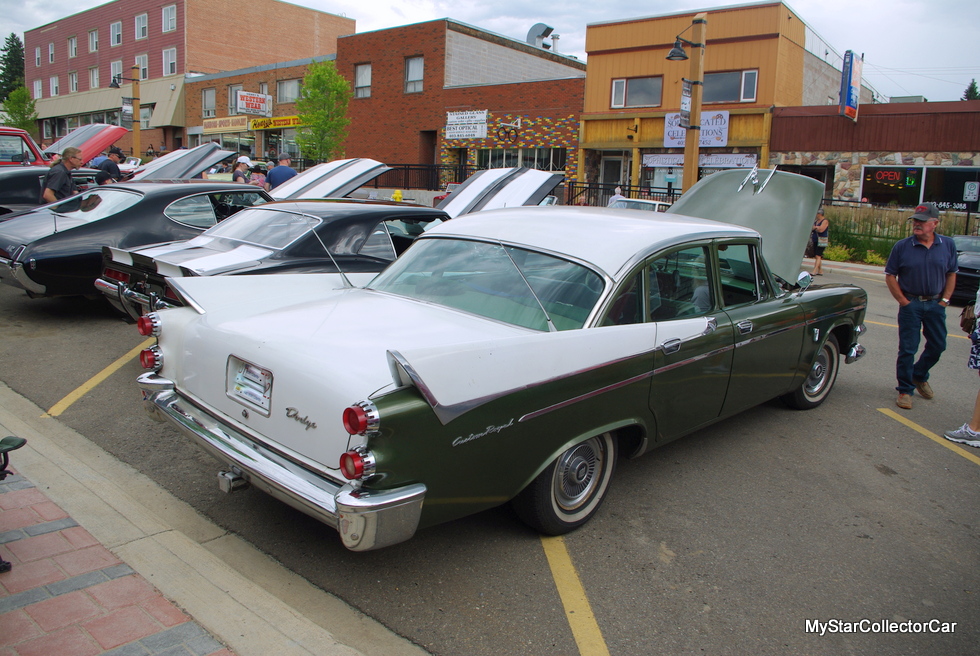 They were victims of the changing style tastes for domestic car owners who embraced a completely different fin-free car style during the 1960s.  The story behind the ’58 Dodge will be a future feature here at MyStarCollectorCar and here is a very brief preview: he is only the second owner of the Custom Royal.

The weather gods were making their move on the Rocky show when MyStarCollectorCar headed out of town en route to Lacombe, Alberta for their annual show.

The wind and rain paced us along the way and eventually the sight of so many very cool retro rides on the roads out of Lacombe confirmed our worst fears: this show was over early and called on account of poor weather. 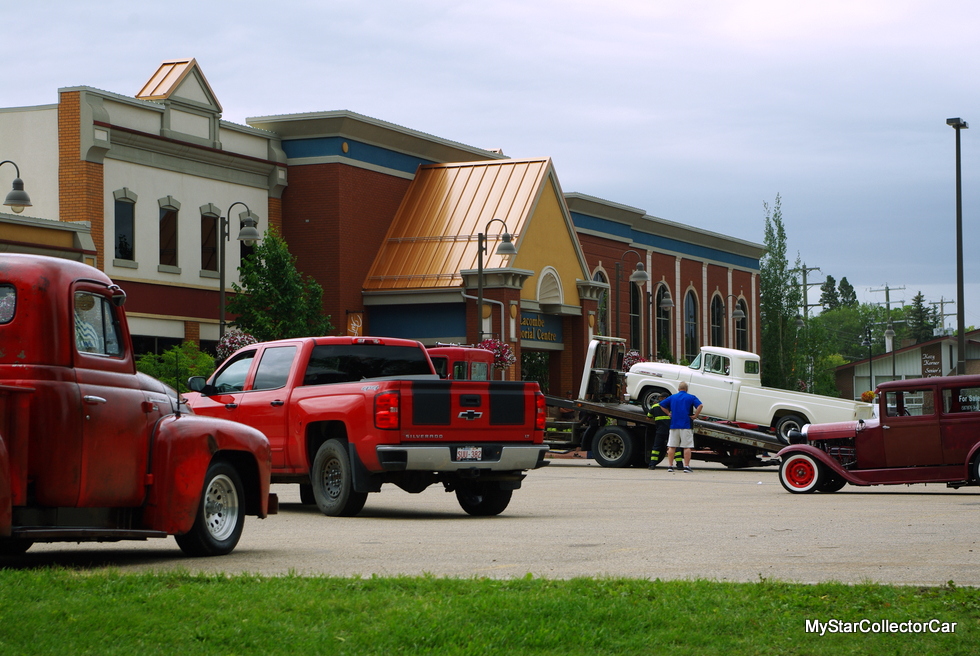 One unfortunate pickup owner left with a tow truck and we had nothing but sympathy for him and the people behind the Lacombe show. MyStarCollectorCar wishes better luck next year to all of them.