Drive in theaters were the brainstorm of Richard Hollingshead in 1933 when he connected the dots on the idea in Camden New Jersey. He rigged up a crude outdoor screen and used an old 1928 Kodak projector to set up the first drive in theater for his car buddies.

Eventually he patented the idea and added a directional sound system which was a simple set of speakers pointed in the direction of the cars.

Drive in theater numbers grew dramatically as the post-war North American population exploded into the famous Baby Boomer generation whose parents used the giant sedans and station wagons of the 50s and 60s to ferry large herds of kids around the suburbs and to the drive in on special family occasions.

The1950s started a change in philosophy for the drive in experience when an alarmist morality police called them “passion pits” and theorized that 50s teenagers had turned cars into honeymoon suites at drive ins across the continent. This was the ideal drive in dream for every red blooded young male, but most young1950s females had a different idea about the drive in philosophy. The young women were there to watch the movie and the restrictions of the decade’s moral compass pointed in a direction that meant romance was more likely to occur after the wedding and not at the drive in. It was probably a soul-crushing experience for the Elvis generation of young males who now had rock and roll music, but little of its wild and unfettered youthful craziness in their actual lives.

Drive ins peaked at around 5000 theaters across North America in the late 50s and early 60s, but they faced a powerful enemy as TV flexed its muscles in the world of affordable entertainment. People found it easier to stay home and let television come to them in their own houses.

Eventually drive in owners compared skyrocketing land prices to their gross annual sales and suddenly paradise got unpaved and made into a condo complex or mall. There are roughly about 600 drive ins left in North America and their main strength is scarcity mixed with nostalgia.

Now it’s 2009 and an ambitious movement is afoot to bring the drive in experience to a parking lot near you. Jason Bashnick just turned 30 but he is familiar with the original drive in experience because there was one in his hometown until just a few years ago.  He is fortunate enough to have experienced the very drive in that was the place where his parents first met. Maybe it was karma that steered young Jason into the portable drive in business because of that fateful drive in love connection between his parents before his time.

Jason was an exchange student in Australia when he saw his first portable outdoor movie screen in an Australian football stadium where an entrepreneurial Aussie found an extra night of use for his facility. At the time Jason considered an idea of a semi-permanent location with an outdoor screen when he returned home. 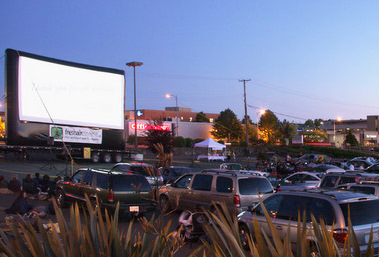 Enter the car guys and their nostalgic look in the rear view mirror that saw Jason’s Fresh Air Cinema- The Outdoor Movie Company as a time machine capable of recapturing the drive in myths and legends from their own misspent youth.

There was no blueprint for Jason and his brothers Steven and Darby as they embarked on a trailblazer mission for a new concept with old roots. Their first portable drive in took place in Valleyview North Dakota and they never looked back. Now they bring nostalgia to countless car shows and car dealer promotions in western Canada and the northern United States.

Jason has had as many as 700 vehicles at one show and averages around 500 to 600 cars for one car club in Victoria BC every time they do a show. The process to a smooth production has taken about five years because, as Jason stated, “nobody’s holding your hand” in a brand new concept. They provide sound through a low watt transmitter that pushes sound through the car radio and eliminates the old window speakers from the past.

The drive in events bring a wave of nostalgia to a generation of Baby Boomers, but the Bashnik brothers also provide an interesting look at a bygone era to brand new generations who never had an opportunity to experience a drive in movie. The reaction of the new generation to drive ins has been overwhelmingly positive and, thanks to these guys, the drive in may be coming soon to a car show near you. Except that the three brothers will never show the soft core pornos made famous in 70s drive in feature movies. Their drive ins are suitable for people of all ages.