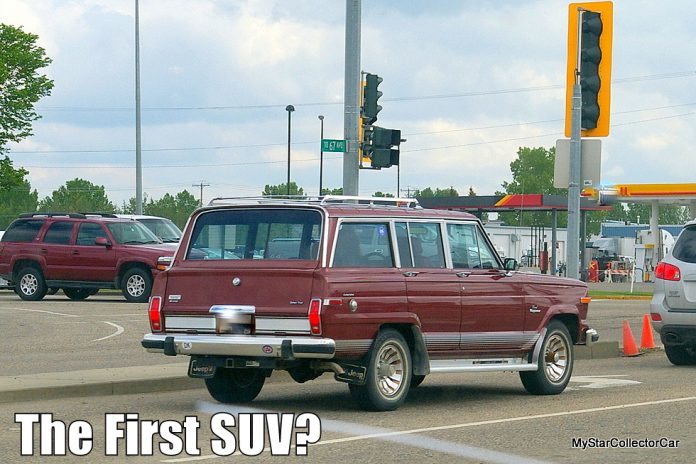 Today’s roads are dominated by sport utility vehicles built by every major automotive manufacturer in the world.

The new age SUVs have become a huge part of the daily lifestyle of modern families because they offer so many features that separate them from a basic sedan, minivan or station wagon from the past.

The 21st century SUVs are built further off the ground than today’s sedans and are equipped with four-wheel drive options that assist the driver when conditions are not perfect.

However, the modern SUVs have a direct link with the past, particularly the famous Jeep Wagoneer that first hit the showrooms in time for the 1963 model year. The Wagoneer was a replacement for the Willys Jeep Station Wagon models that were built from 1946 until 1962 by the Kaiser Jeep Corporation.

The Willys Jeep Station Wagon models closely resembled the famous World War II Jeeps and basically looked like a Jeep grafted to a station wagon body. These earlier vehicles were unmistakably Jeeps and shared their utilitarian style (if not the Second World War battlefields) with the military Jeeps; even though the Jeep station wagons were built for a post war buyer who wanted more room for his expanding Baby Boom family.

The Jeep Wagoneer headed in a different direction from its predecessor because it was built with a blend of comfort and sleek style that subtly showed its Jeep lineage but offered more whistles and buzzers in their newest station wagon models.

The new-for-’63 Jeep Wagoneer had a more comfortable ride because it offered an independent front suspension that smoothed out rough roads better than the buckboard-like straight axle found on earlier Jeep vehicles.

The Wagoneer was more of a modern era station wagon than a Jeep Station Wagon and had upscale choices like power steering/automatic transmission to give it a car-like quality. Buyers from the Wagoneer’s earliest days could also add air conditioning and four-wheel drive into the mix if they wanted more creature comforts and versatility into their Jeep station wagons. By the end of the 1960s, the Wagoneer was only built in 4WD form.

Jeep was famous for its four-wheel drive technology and the Wagoneer benefited from their long legacy in this field.

The refined appearance of the Jeep Wagoneer made it a civilized choice for potential customers who presumably wanted to take the road (or wagon rut) less traveled to their destination.

The lineage of the Wagoneer allowed Kaiser-Jeep to produce a rugged and full-framed off road vehicle that still right looked at home in early 1960s suburbia where it was used as both a grocery and kid-hauler.

The Jeep Wagoneer was initially built by Kaiser-Jeep until American Motors purchased the company in 1970 and eventually AMC was absorbed by Chrysler in 1987. The most interesting part of the Jeep Wagoneer history was its ability to maintain the same basic platform of the original 1963 models and carry that style into the early 1990s when it was dropped from the Chrysler lineup.

The legacy of the Jeep Wagoneer was its identity as an early sport utility vehicle.

The current SUV models are now a dominant force on modern roads, and it would be more than fair to say the first-gen Wagoneer models were some of the first SUVs on the street.