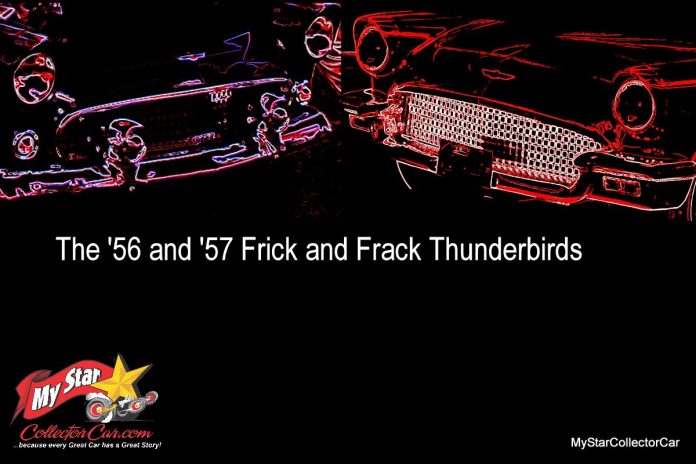 I am an identical twin and a co-founder of MyStarCollectorCar.com with my brother Jerry, so I am very familiar with the confusion we create in the world at large.

One term that rears its ugly head when people can’t get a fix on our actual identities is to call us Frick and Frack, a handle that irritates both of us because it indicates the people who use it are either lazy and unmotivated to differentiate between two separate people, just plain stupid-or any combination of the two.

The two T-Birds had an overall design reflecting their first-generation domestic sports car roots that began in 1955 when Ford introduced their famous two-seater to compete with their arch-rival GM’s Corvette two-seater.

However, there are enough differences between a 1956 and ’57 Ford Thunderbird to make it easy to avoid the Frick and Frack circus experienced by humans who resemble each other.

An important difference between a 1956 Thunderbird and its younger 1957 sibling were the aft sections of the cars. The tailfins on a 1956 T-Bird were straight up in the air, while the tailfins on a ’57 Thunderbird slid down the rear quarter panels and were positioned at a more horizontal angle compared to the earlier Bird.

MyStarCollectorCar readers may also take a lingering look at the 1957 Thunderbird’s taillights because the backup lights were contained in the taillights in a 1957, while they were an option situated above the 1956 T-Bird’s taillights.

The front end of the two cars also had a few important differences. The 1956 Thunderbird had a one-piece straight bumper that was directly below the signal lights positioned on the car’s front fenders. On the other hand, the 1957 T-Bird had a massive two-piece bumper that housed signal lights built right into it.

Additionally, the front license plate holder was built into the bumper of the 1957 T-Bird but required a bolt-on holder on the ’56 Thunderbird’s bumper. The ’57 Thunderbird also had a taller grille than a 1956 version.

The final difference between a 1956 and ’57 Thunderbird was a side view of the two cars because a 1956 T-Bird had Ford emblems behind the car’s hash marks (side gills), while the ’57 had Thunderbird emblems in front of the hash marks.