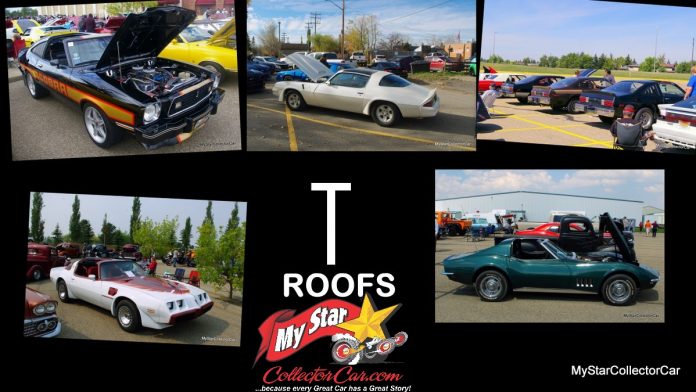 T-Top roofs defined the 1970s in our humble opinion here at MyStarCollectorCar, but the origins of T-Tops actually began in 1968 when it was offered on the newly designed Corvette Stingray.

However, the car’s T-Top creator (a talented auto designer named Gordon Buehrig) did not forget about the T-Top when he successfully sued General Motors for patent infringement. The payout was reportedly small, but Buehrig made his point shortly before his T-Top patent expired in June 1968.

This little-known legal hiccup was a minor speed bump for mass production of the T-Top by Corvette in 1968. The appeal of the T-Top was obvious when Corvette introduced it because it offered all the open-air freedom of a convertible, but with a fixed roof once you removed the tops over the driver and passenger.

The cool factor was through the roof (in a pun and literal sense) when the 1968 Corvette Stingray T-Top models hit the GM showrooms with its new look, including two open air choices because of the Vette’s convertible stable mate.

However, the 1970s was a decade when T-Top cars really began to flex their muscles in our opinion. Detroit’s finest were ambushed by high gas prices when an oil embargo, along with a movement toward tight pollution controls on North American cars, strangled the life out of performance vehicles.

The net result was a movement toward style over performance during the Me Decade. Cars looked faster and sportier with T-Tops, so they became a big part of a new car’s cool factor in the absence of horsepower in the 1970s.

Therefore, our second choice for coolest T-Top is any Firebird built between the mid 70s and early 80s equipped with a removable roof.

These Poncho pony cars may have lacked the brute force of their earlier 70s versions, but their cool factor was off the charts.

Our third choice for coolest T-Top was a close family relative of the Pontiac Firebird, the Chevy Camaro built during the same era.

Like its sibling the Firebird, the famous GM pony car may have been hobbled by excessively harsh horsepower-killing legislation, but the mid 70s to early ‘80s Camaro also looked great during its government-mandated 55 mph journey from Point A to Point B.

Our fourth choice for coolest T-Top is the 1977-78 Mustang II. The 1974 Mustang II debuted as a Pinto in new sheet metal and offended Mustang purists in the same fashion as New Coke offended Coca Cola loyalists in the 1980s, but the Mustang II got a lot cooler when it got a T-top option.

Therefore, a Mustang II with a T-Top definitely makes our cool list here at MyStarCollectorCar.

The fifth and final addition to our cool T-Top list are the 1978-80 Plymouth Road Runner models equipped with this rare open air option. These open-air Mopars were built during the dying days of disco and looked great with the roof panels stored in the trunk in our humble opinion here at MyStarCollectorCar.