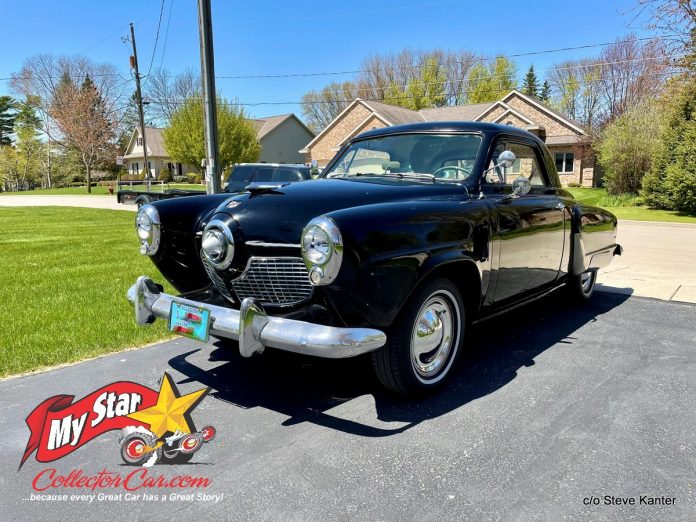 One of the most iconic designs in automotive history is the famous Bullet-Nose Studebaker built in 1950 and 1951 by the creative little car builder from South Bend, Indiana.

Studebaker’s post-WWII business philosophy was based upon innovation on a budget, so they built affordable cars with a unique design, a concept that was abundantly clear during the Bullet Nose years. The Bullet Nose Studeys had a large circular front grill that intentionally resembled a jet engine intake because the cars were built during the early years of jet planes.

The 1950-51 Studebaker’s front grill was unlike any design then or now, so it became associated with the car company’s ability to envision the future in a radical new design that resembled the business end of a bullet for many people.

Steve Kanter is the proud owner of a 1951 Studebaker Champion 2-door Business Coupe and he owes his brand loyalty to his father because “my dad used to drive one (a 1954 Studey) when I was a kid”, in Steve’s words.

Even as a kid, Steve was fascinated with the earlier model Bullet Nose Studeys and finally acquired his ’51 Studey 18 years ago after he purchased it from another car guy. Steve’s Studebaker had been retired from the road for many years after a stint as a florist delivery vehicle, but it was elevated about 3 feet off the ground and covered with a tarp, so it had no rust issues.

The previous owner bought the car when it had 67,000 miles on its odometer (presumably for many Mother’s Day flower deliveries over the years) so the low mileage on the Studebaker helped make its resurrection process simpler in many ways.

Steve respects the idea of originality, so his ’51 Studey still has its original rebuilt flathead six-cylinder engine and three-speed overdrive manual transmission on the steering column. Steve added a few improvements to his Bullet Nose, including higher end chrome trim on the front and rear lights, fender skirts, along with a hood ornament.

The car lends itself very well to these cosmetic upgrades because the extra bling works very well on a base model ’51 Studey that had none when it left the South Bend factory 70 years ago.

He also added front disc brakes to the car because Steve wanted extra stopping power on the road and the original “tiny drum brakes” on the Studey were not up to the task in his opinion. Steve has put 80,000 miles (and counting) on his car over the past 15 years, so his decision to upgrade the braking system makes perfect sense from a safety point of view.

However, Steve has no plans to upgrade the original powertrain and finds a comfortable fit in the 60-65 mph range on the highway. The fact he belongs to the Studebaker Drivers Club means one important thing to Steve: You need to drive ‘em-and he plays by this basic rule.

THE DUMBING DOWN OF THE OLD CAR HOBBY—ADVICE FROM THE SHALLOW...

WHY ELAINE NARDO FROM ‘TAXI’ WOULD BE AN EXCELLENT CAR GUY