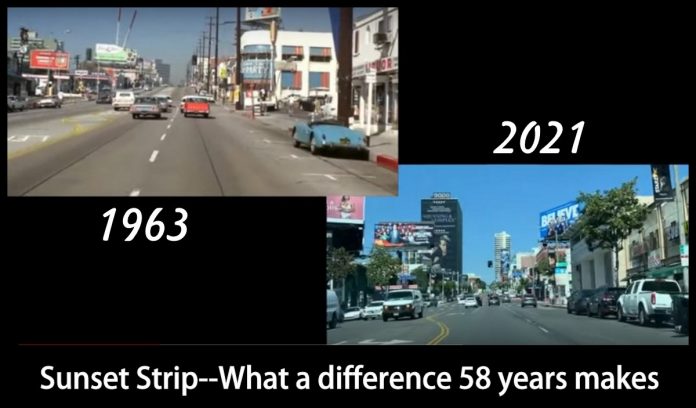 Sunset Strip is one of the most iconic chunks of road in automotive history.

My only visit to the Strip largely eradicated any starry-eyed images about its real inhabitants and replaced them with a seedy impression of the famous street. I felt no legitimate reason to take another pass down Sunset Strip and have subsequently passed on the idea ever since my first visit.

Recently a video emerged that split-screened and compared a drive down Sunset Strip in 1963 with a drive down the Strip in 2021. The video was very interesting from a car guy’s perspective because the differences were striking in so many ways.

The 2021 video was largely comprised of similar-styled generic vehicles, most of which were crossover rides that have become very popular during the past decade. The 21st century vehicles are incredibly reliable and efficient, but they lack any real identity because year, make and model are homogenized in today’s automotive market.

The visual upside appeared on the horizon of the 2021 segment of the split-screen because the sky was bluer and less smoggy than the 1963 video. Sunset Strip video has undergone a major facelift over the past six decades, including more trees along the street, plus there were no power or telephone lines on it, unlike the above-ground poles in the 1963 video version. After all, the famous West Hollywood street is a part of California and its enthusiastically uncontrolled hit-and-miss Green movement.

However, I was considerably more interested in the 1963 version because of the striking array of period cars in the film. There are many areas on Sunset Strip that no longer allow parking, judging by the two films, but there were plenty of parked vehicles in the ’63 version, many of which caught my eye.

Early in the film, a 1958 Ford station wagon is parked on the side of Sunset Strip, with a barebones 1961 Plymouth sedan two cars ahead in the lineup. The two inexpensive cars were likely an economic reality for many inhabitants of that area, but the large, finned beauty in between the duo indicated somebody wanted to perpetuate the image of wealth, even though finned cars were strikingly outdated by 1963.  That’s Hollywood for you, a place where image is everything, even a fading mark of success like a big-finned luxury car in 1963.

Eventually the 1963 film reveals a then late model Lincoln parked on Sunset Strip, while the vehicles driving on the street include a first-gen Thunderbird and a then-new Cadillac, so the Tinsel town image re-emerges-right up until the film car is passed by an early 60s Ford Falcon station wagon, an economy compact not typically owned by Hollywood’s movers, shakers, and posers.

The brief 1963 road trip down Sunset included a vintage Woody wagon that was still a bargain and favored by the California surf punk culture of the time. The same vehicle would command huge money at a famous but unnamed TV vintage car auction, particularly if good booze shoves aside good judgment with drunk bidders.

There were too many classic rides to list in the 1963 film, but the video drive ended on a high note when the film car appeared to have a close call with a 1961 Chevy after the driver blew a stale yellow light that turned red before he entered the intersection. The road configuration at that portion of Sunset Strip appears to be similar, but more endowed with effective traffic lights and smarter drivers in the 2021 version.

MY STAR 1967 PLYMOUTH VALIANT: A Practi-car story with muscle