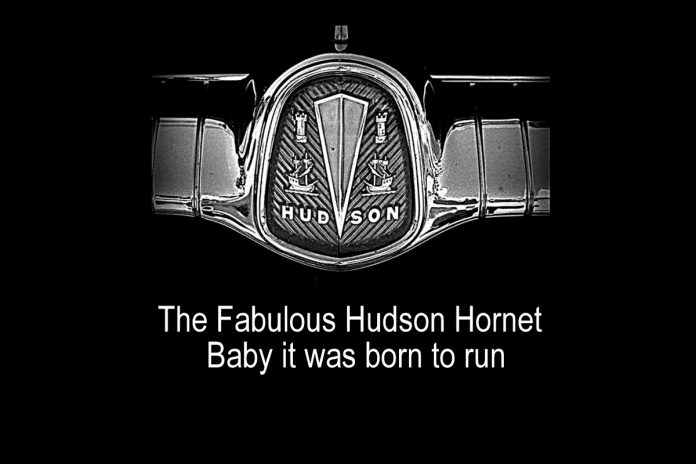 Hudson is a long-forgotten brand name that destroyed its race competition during the early 1950s.

The result of the two car companies’ 1954 merger was a corporate love child named American Motors, but the enormous impact of the Hudson Hornet on the stock car race circuit was already a major accomplishment for the tiny car company before the union with Nash.

Hudson was an innovative car company and introduced sleek engineering that pushed past the stale design of post-war vehicles locked into the same basic style of their pre-war predecessors, a look that was very dated by the late 1940s.

Hudson designed a radically different car that was lower and sleeker, with a wider stance than its Big Three rivals during the late 1940s and early 1950s. Hudson’s radically new engineering was most evident when the company introduced its Hornet model in time for the 1951 model year during the fall of 1950.

The car’s lower stance and better handling was due to its unique “semi-unibody” frame that was wider than a conventional car frame at the time. The result was a car that delivered both comfort and performance when it debuted in the domestic car market.

The Hudson Hornet was also able to sting its competition with a lively flathead six-cylinder engine that could deliver fast (for the early ‘50s time frame) speeds. The factory-stroked engine was known as the H-145 and already had the most power available to domestic cars in 1951.

However, Hudson had a few dealership performance add-ons that pushed their flatty six into beast mode with an engine known as a Twin-H Power, largely because of its dual carb setup. The Twin-H dealer-provided Hudson performance package became a factory option in 1952, a year that (as previously mentioned) became Hudson’s most successful race year. It was not a coincidence because the Hornet became Hudson’s most popular model because the car’s “Win on Sunday” plan definitely had a “Sell on Sunday” result.

The early success of the Fabulous Hudson Hornet on the stock car race circuit can be largely attributed to its pioneer driver Marshall Teague, a man who recognized the car’s enormous race potential and convinced Hudson to give Teague the first factory sponsorship in stock car racing.

Teague opened the floodgates for other drivers (including future NASCAR Hall of Famer Herb Thomas), all of whom jumped onboard with Hudson and produced magic on the race truck. One of the most famous Hudson Hornet drivers was Tim Flock, a legendary NASCAR competitor who apparently had a rhesus monkey ride shotgun during some of his races in his 1952 NASCAR championship year.

The legacy of the Fabulous Hudson Hornet will be forever entrenched in NASCAR folklore. Its reign as a champion went unchallenged for three straight years when the Hornet was a cold-blooded monster on the stock car tracks.